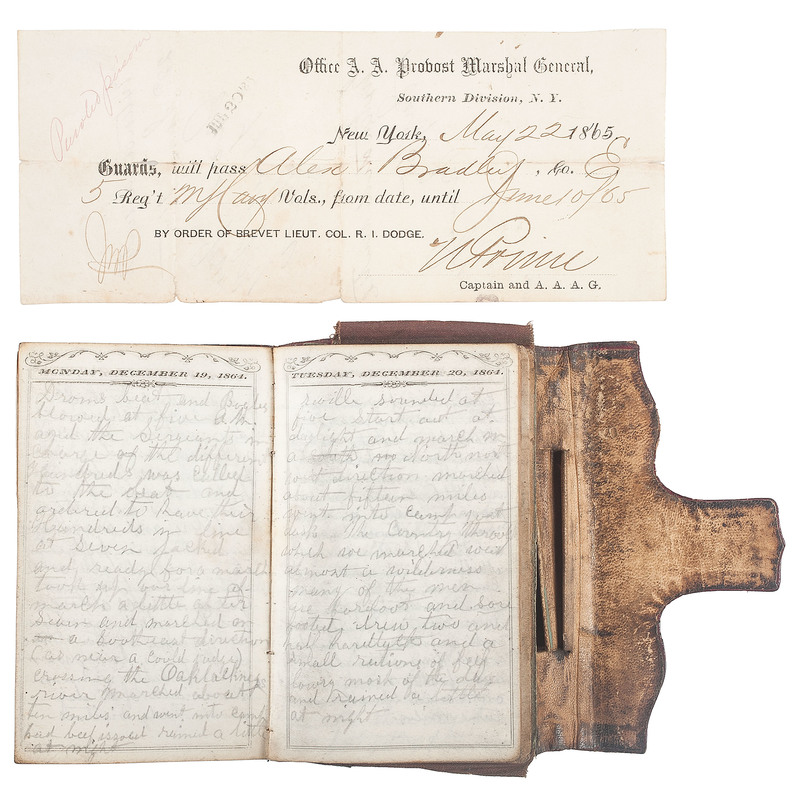 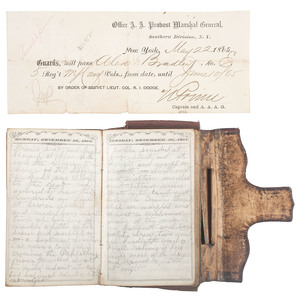 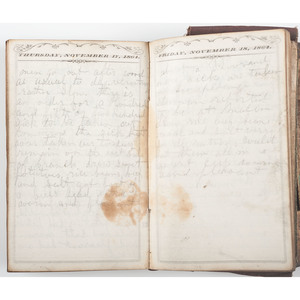 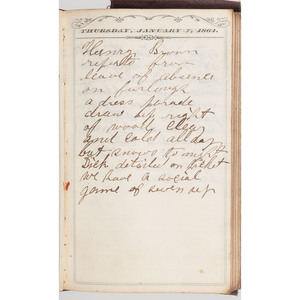 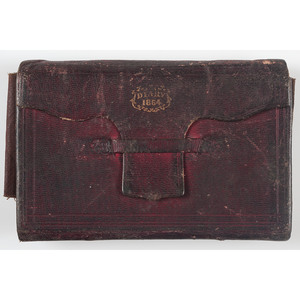 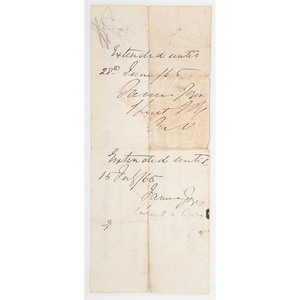 Red leather pocket diary, 3 x 5 in., for the year 1864. Pre-printed for one entry per day, containing 365+ pages with entries on every page. Entries span January 1864 through May 1865 and detail the service of Sergeant Bradley Alexander (1838-1871), Co. E, New York 5th Cavalry. Outstanding content includes description of the NY 5th’s participation in the Rapidan Campaign culminating in Alexander’s capture at Ream’s Station on June 29, 1864, followed by near daily entries detailing Alexander’s captivity at Andersonville as well as other Confederate POW camps.

Bradley Alexander’s time as a POW as detailed in this historically significant diary provides clear evidence of the hardship imposed on soldiers after the breakdown in prisoner exchange agreements. His service began, however, when he enlisted on August 24, 1861 at Farmersville, NY, as a private. Records indicate that he was mustered into "E” Company of the New York 5th Cavalry, aka “Ira Harris’ Guard,” on August 31, 1861, for three years of service. By the start of 1864 Alexander was a veteran soldier, having served with his regiment for over two years in near constant combat including at Gettysburg. Alexander‘s diary opens on January 1, 1864, with his characteristically well-written descriptions of his day and ongoing military activity: “On picket last night had no Rebels to watch and so watched the new year as she came in…we are relieved of a three day tour of picket duty none are detailed for picket that have reenlisted. Meades Scouts went across the River yesterday and captured eight horses one wagon and a quantity of leather.”

Daily diary entries continue in the coming months and include descriptions of multiple engagements such as Ely’s Ford, Kilpatrick’s Raid to Richmond, Beaver Dam Station, and more. After re-enlisting in February 1864, Alexander received a 30-day veteran's furlough departing on March 14th for home. It appears based on his diary that he had returned to his regiment by April 27 when his regular diary entries resume. In these last months before his capture Alexander would write about participation in Spotsylvania, North Anna, Wilson’s Raid on South Side & Danville Railroad, and his final engagement on June 29, 1864, at Ream’s Station: “…found the Johnnys in strong force skirmished with them awhile … was taken prisoner while trying to make my escape to our lines brought back to Stony Creek Station robbed of everything we had.” Hereafter, Alexander’s diary becomes an enthralling captivity narrative as he describes in plain detail his treatment, his rations, the trials imposed by the heat and the cold, prison conditions and activities, the “Police,” the arrival of new “Yanks” in the prison and the departure of others, the deaths of fellow prisoners, his travel between prisons, his ongoing anticipation of a parole, and so much more.

On July 9, Alexander was put into box cars for Andersonville. The following entries are typical of his style and content: Jul 10, 1864, upon first arrival at Camp Sumter, “arrived at Andersonville at ten PM stood in the sun at the Head Quarters of the officer of the interior of the prison about two hours I was then pushed into the stockades where there is about twenty seven thousand fellow prisoners…”; October 9, 1864, "a bitter cold night last the suffering cannot be imagined no wood nor clothing. Reorganized and moved to the south side of the Branch put into Detachments of five hundred each one hundred in a mess drew bacon beef beans and bread small rations sick all ordered to the Barracks…”; Jan 23, 1865, “Five Hundred Prisoners from Sherman’s Army taken when Hood got in the rear of Sherman at Atlanta about one hundred Yanks take the oath and go into the Rebel Army.”

By February and March of 1865 Alexander regularly reports on the great excitement caused by news of prisoner exchanges. Civil War POW records indicate that Alexander was paroled March 15, 1865, however, Alexander’s diary indicates that he remained a POW for weeks to come. As the war drew to a close Alexander was moved from Andersonville on multiple occasions presumably both to avoid anticipated Union raids on Confederate prisons and to attempt exchange. While the Confederate government may have determined to release him, the Federal government was in many instances not accepting paroled prisoners. After one such attempt at release, Alexander is returned to Andersonville, noting on April 10, 1865, that “we all entertain fears of going back into the bullpen.” The following day he reports “The Colonel Commanding came in and informed us that we would not remain here and the reason of our not going through was the refusal on the part of our government to receive us….” The last months of the war are for Alexander an agonizing period of raised and dashed hopes of parole. Finally, in early May 1865, Alexander travels to Florida and passes under the flag of truce into Union hands. After spending time in a parole camp, Alexander arrives in New York on May 22, 1865, writing that he “marched to the Provost office to be mustered gave us passes instead…and started home on the six o'clock.”

Accompanying this diary is the pass issued to Bradley Alexander by the Office of the Provost Marshal upon his eventual parole. The date on the pass, May 22, 1865, matches the date of the diary entry. Note that the partially printed pass reverses the soldier’s name, identifying him incorrectly as "Alex Bradley," while correctly identifying him to Co. E of the 5th Regiment New York Cavalry Volunteers. Handwritten notations on verso indicate that his pass was extended once from June 10, 1865 to June 16, and then again until July 15, 1865. Alexander was mustered out just eleven days later, on July 26, 1865, at Elmira, NY. He died on December 13, 1871, and is buried in Allegany County, NY.

Overall the diary is in good condition with expected wear given age. Diary entries are in pencil that is sometimes faint, but all entries are legible. Diary pages with available space were often reused by Alexander for entries from 1865. This can sometimes make chronology difficult to follow, however, Alexander carefully dates each journal entry so chronology can be firmly established.