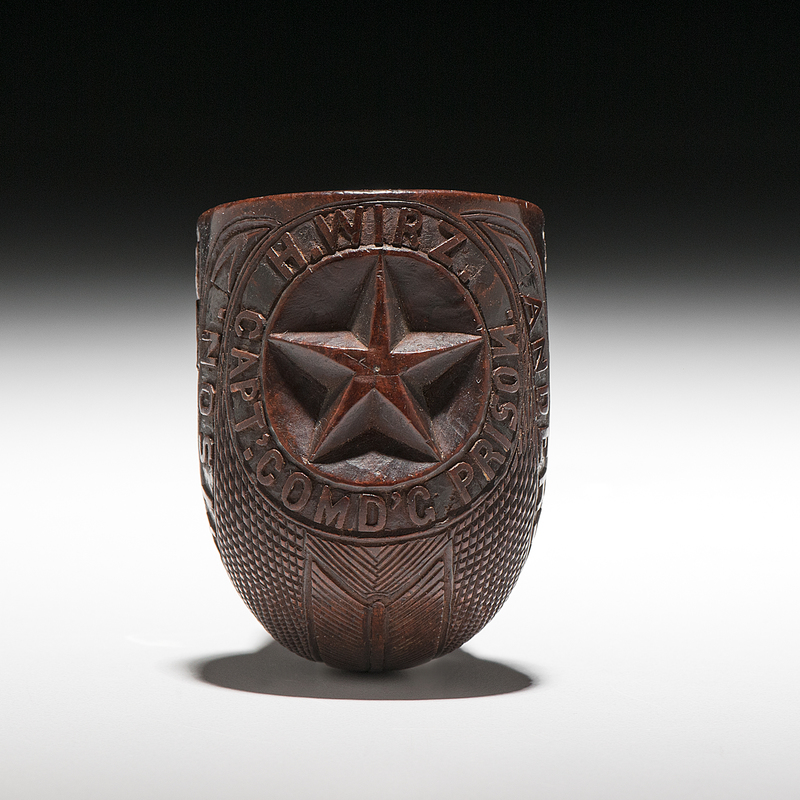 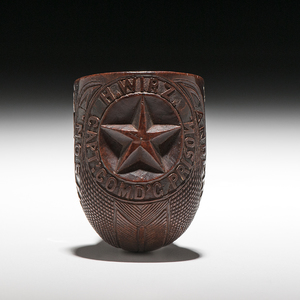 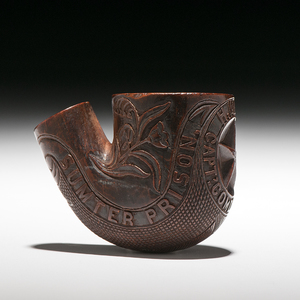 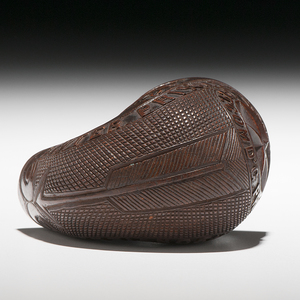 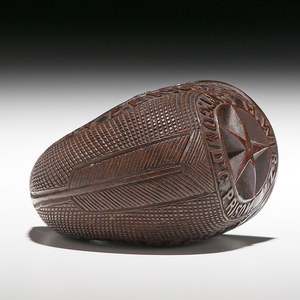 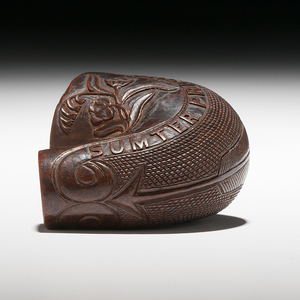 Dark brown folk art carved pipe, very nicely grained wood, most likely laurel root; almost identical to the pipes offered as Lots 103 and 104, and the largest of the three. This example is thicker and a bit heavier than the other two as well. Design on front includes name and rank nicely relief carved and entirely encircling on the panel around the large relief five point star: H. Wirz. Capt. Comd'g Prison. With long curved panel/ riband on right side of pipe relief carved, Sumter Prison, and another panel like it on the left side carved, Andersonville, GA. Above each of those curved panels filling the left and right side is a relief carved large branch leaf and single large blossoming flower motif. This pipe has a very large and lengthy relief carved motif of an arrow starting just below the oval front panel and running around the bottom and almost the full length of the shank with the head of the arrow pointing upwards towards the top of the shank. It does not have any silver or German silver mounts and was never fitted for them. Maximum width 2.75 in.; bowl height 2.25 in., dia. 1.75 in.

The pipe is accompanied by a typed tag that states, Presented by Captain Wirz, commanding Andersonville Prison, to E.W. Masterson, 4th OVC, Mr. Masterson being with the ____ sent to arrest Wirz.

The true nature of Heinrich Hartmann Wirz (1823-1865), also known as Henry, is a complicated mix of legend and fact. Born in Switzerland, he immigrated to the United States to seek other opportunities. He tried but failed to practice homeopathic medicine, which forced him to take several odd jobs across the country including a position as an overseer at a 2,200 acre plantation in Louisiana. Early in his Civil War service, he began guard duty at Howard's Factory Prison where he developed a reputation for efficiency and callousness. His reputation followed him to Andersonville where he purportedly inflicted harsh punishments on the prisoners, and, conversely, sometimes exercised compassion and empathy. Wirz feared Union retribution, and, as early as 1861, predicted that he would die if the Union captured him. His premonition came true. On May 7, 1865, Union officers arrested him at Andersonville. Nearly 150 former prisoners, guards, Confederate officials, civilians, and medical staff testified against him at his nationally recognized trial. Consequently, he was tried and convicted for conspiracy to kill or injure prisoners in violation of the laws of war in addition to multiple counts of murder. He swung from the gallows until dead on November 10, 1865.

Edward W. Masterson (1846-1902) enlisted as a sergeant and mustered into Co. L of the 4th Ohio Cavalry on August 19, 1862, serving almost three years before mustering out at Nashville, TN on June 16, 1865. No published documentation mentions Sergeant Masterson being in close proximity to Major Wirz or the pipe offered here between May 7-20, 1865, the brief period during which Wirz was under arrest and in the custody of a Captain Henry E. Noyes, 2nd US Cavalry, Acting Assistant Inspector General, Cavalry Corps, Military Division of Mississippi (MDM). However, the 4th Ohio Volunteer Cavalry was stationed at Macon at the same time Wirz was in custody, which leads us to the conclusion that Masterson may have been part of one of Wirz's guard details and acquired the pipe while on guard duty.

Three extremely rare and historic wood pipes with identical motifs that seem to have been created by the same Union prisoner at Andersonville prison in Georgia. The three pipes were purchased by Mr. Flayderman over a very lengthy period of time, with the first one acquired in the 1950s and the last in 2001. Mr. Flayderman's research indicates that a fourth pipe carved in the same style also exists.