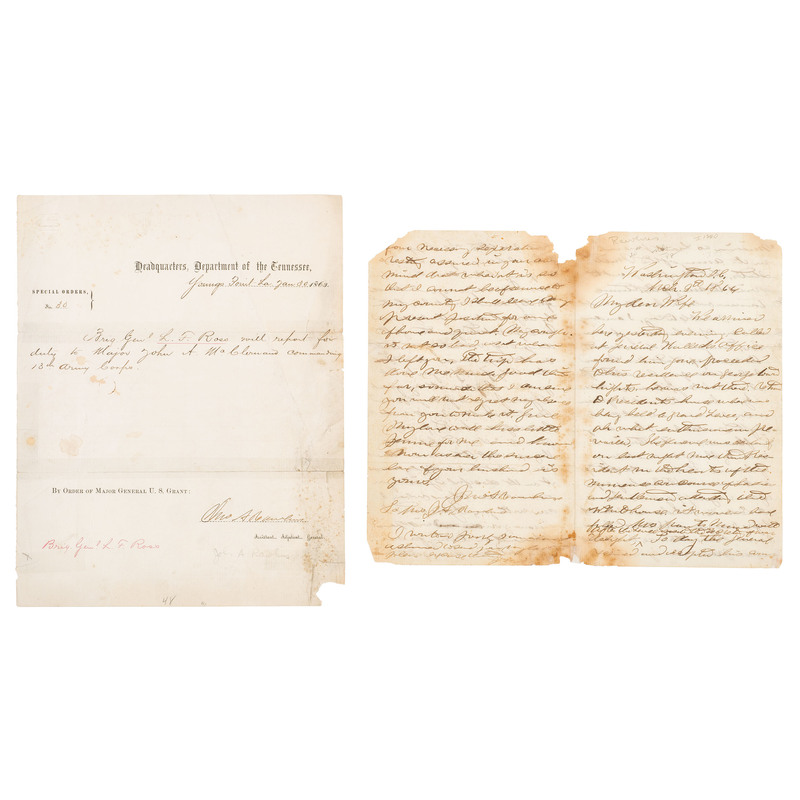 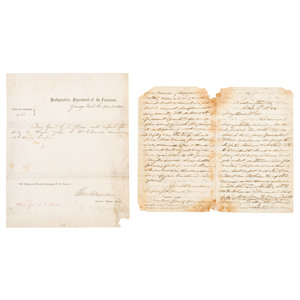 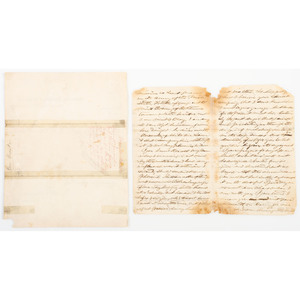 Lot of 2. Rawlins, John A. (1831-1869). United States Secretary of War under President Ulysses S. Grant. ALS, 4pp, 5 x 8 in., Washington, DC. March 9, 1864. Addressed to his wife. In this hurriedly written letter, Rawlins begins by noting the attendance of General Grant and himself at a levee at the "President's house...what enthusiasm prevailed." He writes that Grant was "certainly on last night more than [the] President in the hearts of the immense concourse of ladies and gentlemen attending the White [H]ouse. [I]t would have filled Mrs Grant's mind with delight...." He continues, writing, "Today the general received and accepted his com- / -mission as Lieut general in the army of the United States. He talks of going out to visit the army of the Potomac...I am doing all I can to get him away from here. Tonight he dines with the secretary of state Mr. Seward. I shall accompany him although it is not my pleasure to do so. you know dearest my reason, where I am wine is not drank by those with whom I have any influence." He then mentions consequences of the "new order of things," including "the breaking up of our very happy little home at Nashville." Before closing the letter, Rawlins expresses his devotion to and love for his wife, along with his gratefulness for "the good Angel that guarded and protected you through the dangers of Vicksburg...."

Partially printed DS, 1p, 7.875 x 9.875 in., Youngs Point, LA. January 30, 1863. This special order from General Grant reads, "Brig. Genl. L.F. Ross will report for duty to Major John A. McClernand commanding 13th Army Corps." Red ink inscription on verso dated four days later details that transport was furnished by a "J. [?] Lewis," from Memphis, TN to Vicksburg, MS. Interestingly, McClernand had achieved the rank of major general by this time, making this order a possible denigration of him. Tensions between McClernand and Grant had heightened after McClernand went directly to Abraham Lincoln to receive his commission to command the 13th Army Corps. Five months after this order was signed, McClernand was relieved of his command by Grant at Vicksburg.

John A. Rawlins was born in Galena, IL where a branch of the Grant family lived. Ulysses was sent to St. Louis after graduation from USMA and eventually (1860) found himself in Galena working with his younger brothers. When the war broke out, Grant attended a meeting in Galena held to encourage recruitment. At that meeting, his father's attorney, John Aaron Rawlins, gave a speech that made Grant determined to fight. Rawlins became a confidant of Grant's, and the two remained associates for the rest of their lives. Rawlins served on Grant's staff in the Army, then held a number of positions after the war. He was appointed Secretary of War when Grant became President, a position he held until his death six months later.

Letter with heavy dampstaining down central fold and at corners, some paper loss, especially along fold edges and upper corners, fold tissue strengthened with tape.

Special orders with strong folds (strengthened by tape), some spotting and surface soil, with wear including some paper loss to edges and corners.