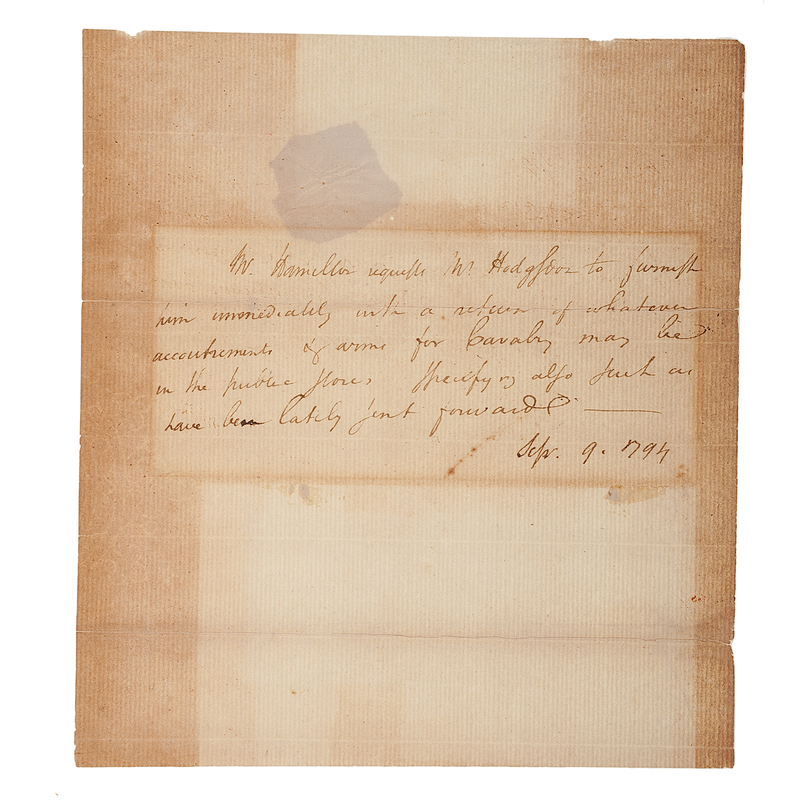 Hamilton, Alexander (1755-1804). United States Founding Father; first Secretary of the Treasury (1789-1795). Short note on 7 x 7.5 in. sheet of paper. September 9, 1794, n.p. Mr. Hamilton requests Mr. Hodgdon to furnish him immediately with a return of whatever accoutrements of arms for Cavalry may be in the public stores. Specifying also such as have been lately sent forward. The request is associated with the "Whiskey Rebellion," which tested the powers of the new government to raise funds through taxation and enforce federal laws.

Born in the West Indies, Alexander Hamilton, as John Adams would later describe him, was "the bastard brat of a Scottish peddler." James Hamilton would abandon Rachel and their sons, James and Alexander, when Alex was still young, leaving them totally impoverished. Alexander took his first job at the age of 11, determined to work his way out of poverty. Rachel apparently worked herself to death, succumbing to illness at the young age of 38.

In a subsequent position as a clerk, Hamilton began to learn about international trade and finances. The young lad's intelligence did not go unnoticed, and a group of businessmen in St. Croix pooled resources to send Alex to the colonies for an education. He arrived in New York in 1773 and began attending King's College (later Columbia University). War was coming, and the young man became increasingly involved in politics, eventually leaving school to join the patriots in protesting taxes and regulations imposed by England.

He fought with New York militia units early. In about 1777 he caught Washington's attention, and was quickly promoted, becoming the General's assistant, but for a time, that meant handling the paperwork that goes along with the top position. Hamilton was in and out of the field, becoming bored with paperwork and returning to his commander-in-chief's side. Hamilton was even allowed by Washington to lead a charge at Yorktown.

After the war, Hamilton served, among other positions, as Secretary of the Treasury (1789-1795). One of his missions was to strengthen the Federal government and pay off the debt incurred during the War. To effect this he instituted several taxes, including one on distilled spirits. Since the favorite spirit of the colonies at the time was Whiskey, this came to be viewed as a Whiskey Tax. It hit the distillers on the western frontier particularly hard. They had a lower profit margin than the larger Eastern distilleries already, and the tax cut into their already small margins. Many of these distillers were also veterans of a war fought against unrepresented taxation, who then felt that they were being targeted by their own government.

The causes of what came to be known as the "Whiskey Rebellion" are complex, and will continue to be debated for many more generations. Trouble was brewing as early as 1791, mostly in the western counties of Pennsylvania and nearby areas (western Virginia, Kentucky, etc.) Initially Washington tried to quell the unrest by sending "peace commissioners" in 1791 and 1792, then again in 1794. By late 1793 the home of a tax collector was broken into in Fayette County. Further violence erupted over the next year in nearby areas.

By summer of 1794, there was widespread armed resistance. Hamilton was among those who pressured Washington to counter force with the force of the government. What was at stake in part was whether the new nation was willing and able to suppress resistance to its laws. As there was no standing army yet, Washington called for militia forces to be Federalized. Congress had passed a Militia Act of 1792, but to send troops to an area, a Supreme Court Justice had to certify that local law enforcement could not control the situation. When very few men volunteered for militia duty, a draft was used, although draft evasion was widespread. His "army" was composed of units primarily from Virginia, Maryland, New Jersey and Pennsylvania. Many other states refused to send units, siding with the whiskey protesters in protesting "taxation without representation."

Of course, as Washington made arrangements to ride out to meet the insurgents, Hamilton was determined to ride along with him. Early in the process, he argued that he had been the one to author the law instituting the tax, and he should go out and show the rebels that he was willing to die to defend it. Washington conceded, but not necessarily because of Hamilton's argument. Hamilton now needed to be outfitted for the field, so he sent this note to Superintendent of Military Stores, Samuel Hodgdon.

Washington and Hamilton did ride to the frontier to meet the rebels, but by the time they arrived, the rebels had dispersed, although some of the leaders were later rounded up. (Washington pardoned most of them, even those who were sentenced to death for violent actions such as beating a tax collector and burning his house.) This incident was the only time a sitting president led troops in the field. After meeting with representatives of the protesting groups in early October, Washington was convinced things were under control. He left the army under the command of Henry "Lighthorse Harry" Lee (Robert E. Lee's father). Alexander Hamilton remained for a time as a civilian observer/adviser, while Washington returned to Philadelphia.