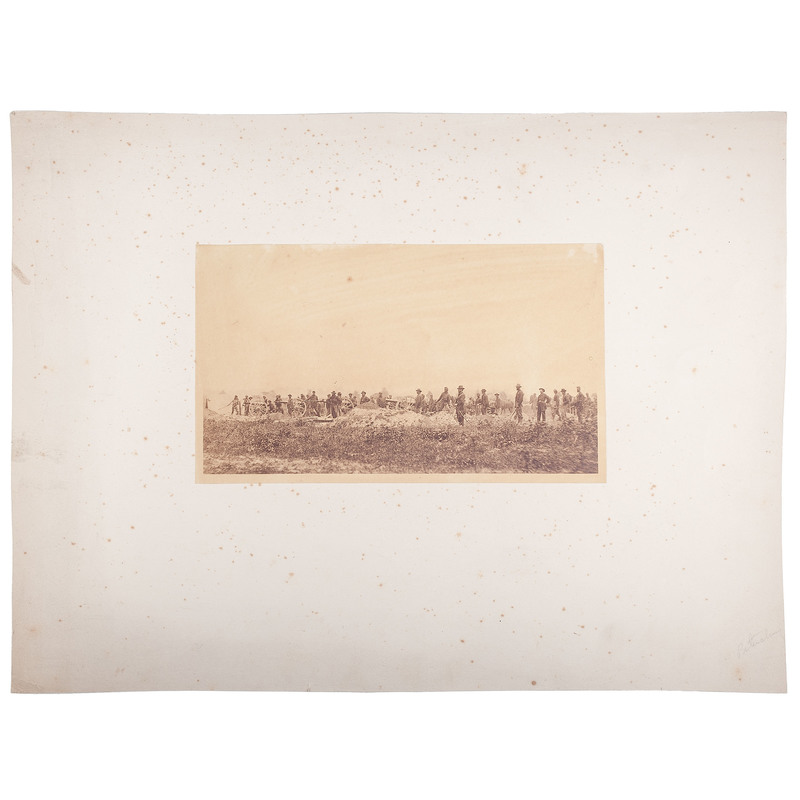 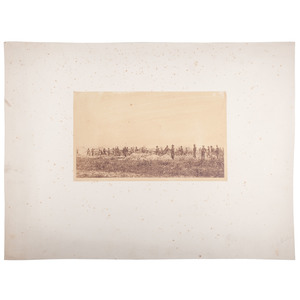 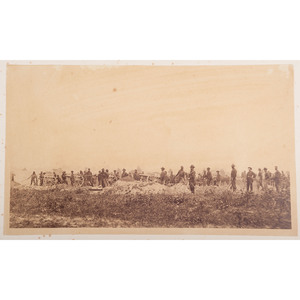 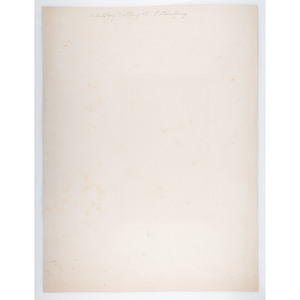 Albumen photograph, 7.75 x 4.5 in., mounted, 14.5 x 10.9 in., featuring Cooper's Battery B of the 1st Pennsylvania Light Artillery at the Avery Farm in Petersburg, VA, taken on June 21, 1864. The image shows Captain Cooper standing at the right center, closest to the camera, and was taken looking northeastward in the general direction from which the Union forces approached the Petersburg front. This photograph is among the best-known views from Brady's Petersburg series of June 1864, taken by Brady nearly a mile from enemy lines, and only a few days after Confederate forces abandoned the Avery farm.

The 1st Pennsylvania, assigned to the Fifth Corps commanded by General G.K. Warren, arrived at Petersburg on the morning of June 17, 1864, engaging the Confederate batteries commanded by General Beauregard near the Avery house. They built fortifications and remained in position for about a week, during which time Mathew Brady took the photograph featured here. A gunner from the battery, Lieutenant James A. Gardner, who is also featured in this photograph, was interviewed by researchers working on Miller's 1911 volume, Photographic History of the Civil War. His recollections include details about the photograph, including this fascinating detail: "When engaged in action, our men exhibited the same coolness that is shown in the picture - that is, while loading our guns." There were actually at least two photographs of the battery taken that day, and Alexander points out that the one featured here was taken "from a point a little to the left, and front, of the battery."

The Siege of Petersburg lasted from June of 1864 until the following spring, leading to Lee's ultimate surrender at Appomattox. Taken amidst this prominent event, just a mile from enemy lines, the photograph featured here possesses a sense of historical immediacy, reminding viewers of the risk involved in capturing such a compelling image.

Photograph sharp and clear, with minimal wear including light spotting mostly kept to upper half of image. Mount with spotting throughout and light wear to edges and corners. Pencil inscriptions on recto and verso identify Petersburg as the location of the photograph.