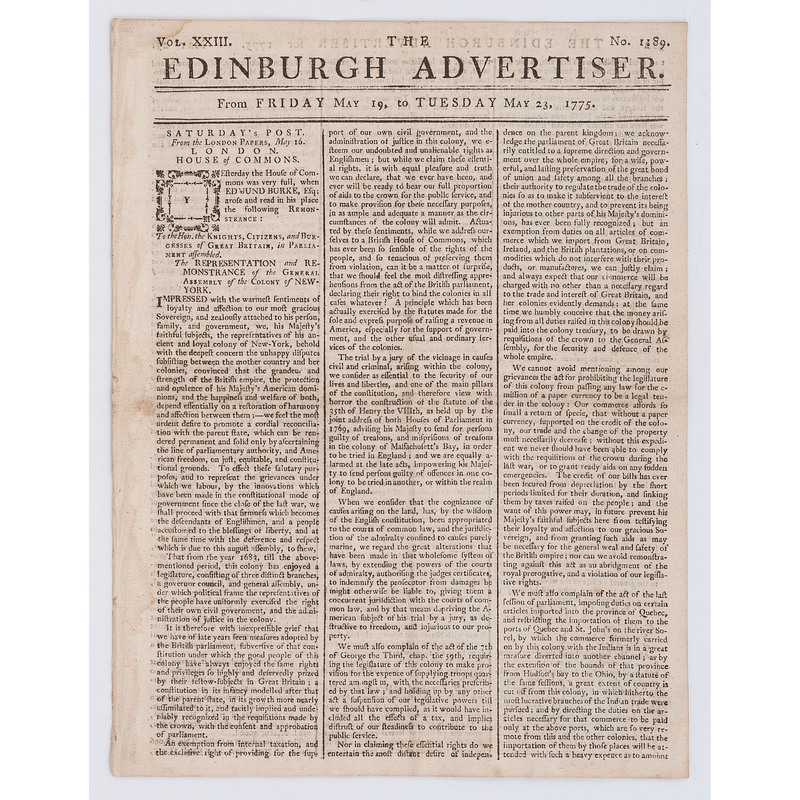 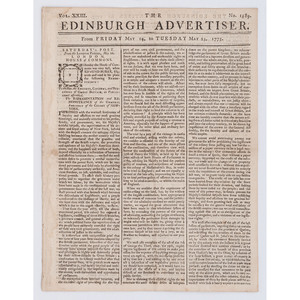 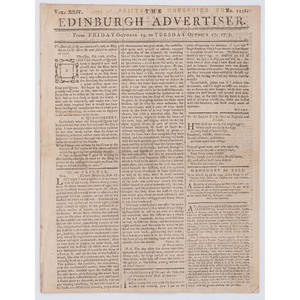 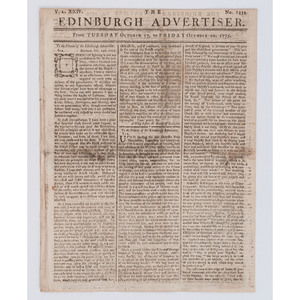 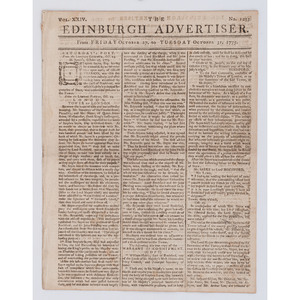 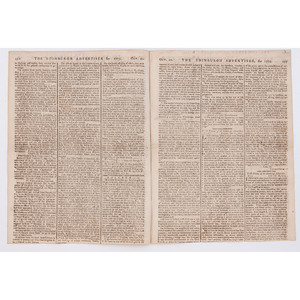 Accounts of the American Revolution in Edinburgh Advertiser, 1775

The issues are replete with extensive coverage of events in America in the fall of 1775, including military engagements, Indian affairs, and political news.

May 23, 1775. Complete text of “THE REMONSTRANCE OF THE GENERAL ASSEMBLY OF THE COLONY OF NEW YORK” as introduced to the House of Commons by Edmund Burke on May 16, 1775. “Impressed with the warmest  sentiments of loyalty and affection to our most gracious sovereign, and zealously attached to his person, family, and government, we his majesty's faithful subjects...behold the deepest concern the unhappy disputes subsisting between the mother country and her colonies, convinced that the...strength of the British Empire, the protection and opulence of his majesty's American dominions, and the happiest of both, depend eventually on a restoration of harmony and affection between them…It is with inexpressive grief that we have of late years seen measures adopted by the British Parliament, subversive of that constitution under which the good people of this colony have always enjoyed the same rights and privileges so highly and deservedly prized by their fellow subjects in Great Britain...We esteem our undoubted and unalienable rights as Englishmen...nor can we forbear mentioning the jealousies which have been excited in the colonies by the extension of the limits of the province of Quebec in which the Roman Catholic religion has received such ample support...we claim but a restoration of those rights which we enjoyed by general consent before the close of the last war; we desire no more than a continuation of that ancient government to which we are entitled by the principles of the British Constitution, and which alone can be secured to us by the rights of Englishmen..." Signed by John Kruger, Speaker of the Assembly, March 25, 1775. (Complete text covering all of the front page and one third of the second page.) Coverage of the subsequent debate in Parliament following the introduction of the resolution by Burke including statements by Charles James Fox and Lord North. With detailed coverage of parliamentary debates on the REPEAL OF THE QUEBEC ACT. (more than a full page). Fine example of tax stamp on back page.

October 17, 1775: Engagement near Watertown, stating that despite “sustaining a continual fire” colonists only suffer two killed. British Naval ships attack Stonington Harbor. 700 Indians of the Mohawk and Onondaga nations arrive in Albany to declare support for the Americans. British garrison of Québec reported to be poorly defended as “Gov. Carlton had taken the greatest part of the cannon from the forts to mount on the floating batteries in St. John's.” Naval engagement with the provincials near Providence. Notice of the marriage of the Hon. JOHN HANCOCK, President of the Continental Congress, to Miss Dorothy Quincy of Boston. Indians of the Six Nations declare that “they should not take up the hatchet on either side.” Accounts from Cambridge say that 90 British troops were killed by the Americans.

October 20, 1775: Proclamation signed by Charles Thompson, Secretary of the Continental Congress, affirming that the resolution “that THE INHABITANTS OF THESE COLONIES WOULD NOT DIRECTLY OR INDIRECTLY EXPORT ANY MERCHANDISE OR COMMODITIES WHATSOEVER TO GREAT BRITAIN, Ireland or the West Indies” would also apply other British territories including the Channel islands. EDMUND BURKE advises the merchants of Bristol that he has presented their petition “humbly beseeching His Majesty to cause hostilities to cease in America” to His majesty KING GEORGE III. The ship Phoenix arrives with the widows of several officers “who went from Boston to New York soon after their husbands were killed in the engagement at BUNKER’S HILL.” Reports of disagreements between GENERAL PUTNAM and GENERAL WASHINGTON. Proclamation from the provincial Congress in New York protesting the actions of the Captain of his Majesty’s ship Asia who “under pretense of protecting the Kings property did in the dead of night…fire upon the south part of this defenseless city….” Continental Congress discusses plans for the MANAGEMENT OF INDIAN AFFAIRS and “… have appointed commissioners…with proper presents, talks, and belts of wampum and the usual necessary articles of trade for the several nations.” Major Rogers “at the head of numerous body of Indians of different tribes had declared…that for the ill-treatment he had received from the government he would do all to lay in his power to seek revenge and assist the colonies.”

October 31, 1775: news from Québec that “a party of the provincials which had penetrated into Canada were attacked by Gen. Carlton at the head of about 200 regulars, and a body of Canadians. The rebels were defeated with a loss of 20 men killed and a considerable number wounded…” News from Philadelphia of the arrival of JOHN HANCOCK and PEYTON RANDOLPH and other delegates to attend the Congress. Complete text of KING GEORGE III'S SPEECH TO PARLIAMENT ON AFFAIRS IN AMERICA on October 26, 1775. “… those who have too long successfully labored to inflame my people in America by gross misrepresentations and to infuse into their minds a system of opinions repugnant to the true Constitution of the colonies, and to their subordinate relation to Great Britain, now openly avow their REVOLT, HOSTILITY AND REBELLION. They have raised troops and are collecting a naval force, they have seized the public revenue and assumed to themselves legislative, executive and judicial powers which they already exercise in the most arbitrary manner over the persons and properties of their fellow subjects.…”

Four complete original newspapers in fine condition with tax stamp on the last page of each issue.