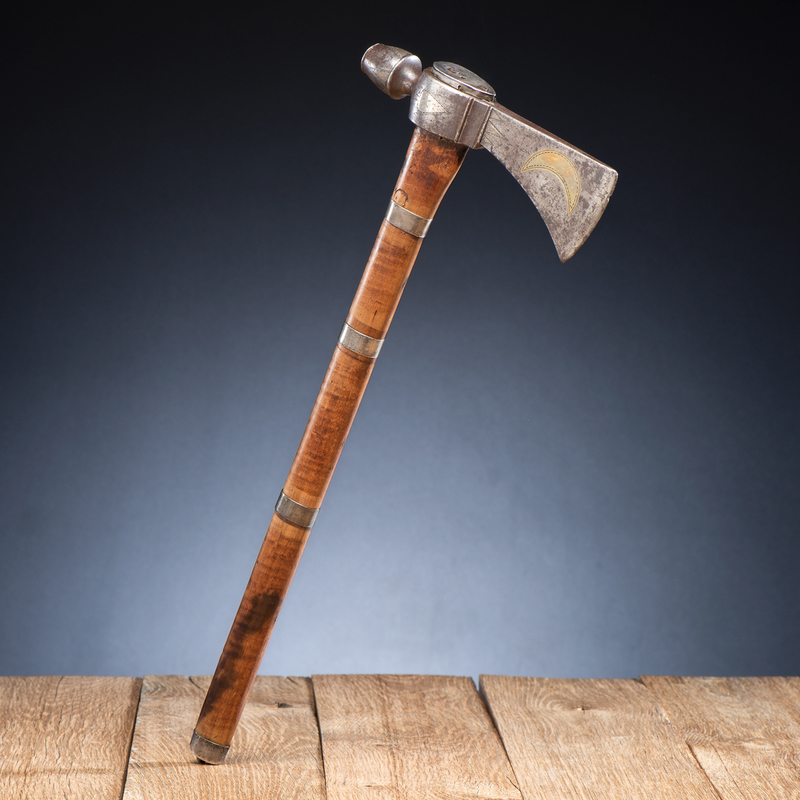 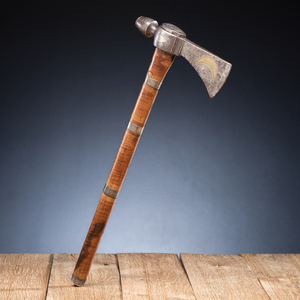 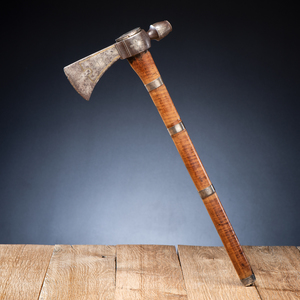 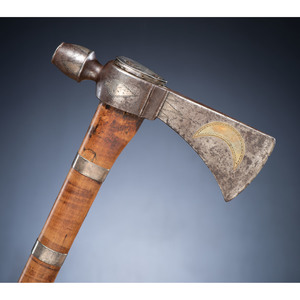 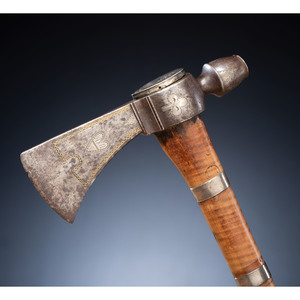 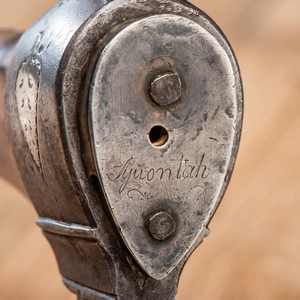 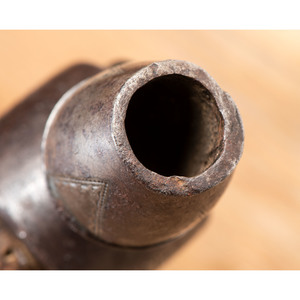 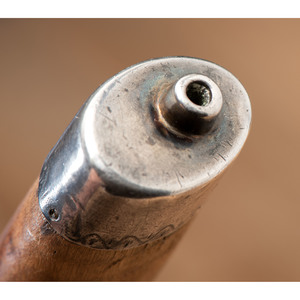 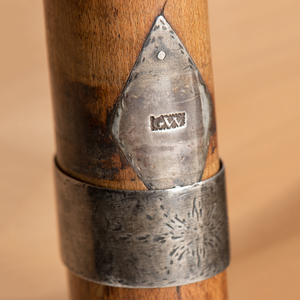 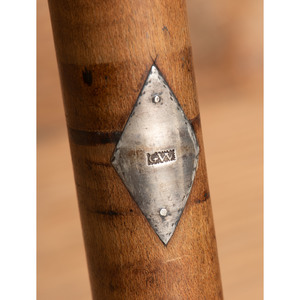 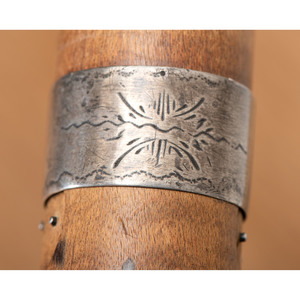 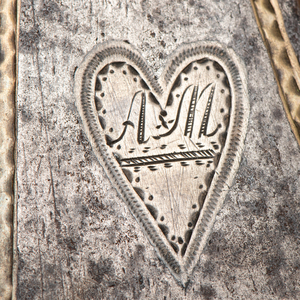 with forged steel American style head, overall length 8.5”, blade 3” wide, with flattened top and strongly keeled lower edge.  Blade inset with coin silver and brass decorations on both sides, one face with an inset coin silver heart bordered by rocker engraving and further embellished with punched decorations, the heart itself  with a serrated border, the initial “AM” centered on the inside of the heart over a two-lined element.  The heart lies within a larger device formed of a heavy gauge brass wire with punched decoration that parallels the outline of the blade.  At the top of this devise a inset silver triangle point to the cleft in the top of the heat, while at the bottom, the brass wire forms a conforming “u” shape to match the tip of the heart.  The eye of the haft features a silver three leaf clover with punched, stamped and fine rocker decorations.

The coin silver end cap is attached to the haft with two hand-forged nails and further embellished with the name Syuontah in flourishing script.

The haft is constructed of highly figured maple, and decorated with three coin silver bands and a coin silver mouthpiece, each with a slightly different engraved and punched element.  Two of the three bands cover a diamond shaped silver device centered with the touch mark of “GW.”

Long utilized for diplomacy by American and British government officials, the presentation style pipe tomahawk was a favorite gift to bestow upon important Native American tribal leaders of the Northwest Territory. Often inlaid with silver and exhibiting superior craftmanship, this style reflected the social standing and status of its owner and thus was highly valued, particularly by non-western groups. With its embellished blade, silver inlays, bands, and engraving, the tomahawk offered here is an excellent example of the presentation style and was probably crafted specifically for diplomatic purposes.  The initials “AM” inlaid within a heart on one side of the blade provide a compelling – though not conclusive -- argument for whom the pipe tomahawk might have been made, while the engraved name “Syuontah” offers definitive information about its recipient and ultimate owner. Finally, the touch marks of “GW” provide information on a possible silversmith and where the tomahawk was likely made.

The engraved “AM”, the style of the pipe tomahawk, and the probable date of manufacture suggest it might have been made for British Indian Department Agent Alexander McKee (ca. 1735-1799).  The engraved “Syuontah” no doubt refers to a Wyandot headman whose name appears in various forms beginning in the early 19th century.  “GW” may refer to silversmith George Walker of Philadelphia.

McKee entered into the service of the British Indian Department in 1760. Following his 1778 defection to the British side during the American Revolution, McKee rose to the position of Deputy Superintendent and Deputy Inspector General of Indian Affairs. As a representative of the British Crown and interests, McKee worked out of Fort Detroit and would have had the financial capacity and incentive to commission a piece such as this. Perhaps more significantly, McKee wielded extensive influence among Britain’s Indian allies and was well-respected among the various tribes. This stemmed from a life forged among non-Europeans. He was the son of a fur trader and a mother who may have been part Shawnee, but by other accounts was a white woman who had been a captive of the Shawnee. In either instance, McKee’s mother and father embraced many native ways, and passed their familiarity with native culture onto their son. McKee lived with the Shawnee in frontier Ohio during the 1760s, took a native wife, and later operated a trading post at “McKee’s Town,” in present-day Logan County, Ohio. When his post at McKee’s Town was destroyed by Logan’s Army in 1786, his outpost was rebuilt, and then eventually relocated on the rapids of the Maumee River, near what would become the Fallen Timbers battlefield and not far from what would become the Wyandot reservation at Upper Sandusky.   At each of these postings, McKee was more than an Indian agent distributing goods to the Indians; he was an emissary for the British Crown and a fully accepted member of Ohio Country Indian society (Nelson, 1999: 24).

McKee was only an observer at the pivotal 1794 Battle of Fallen Timbers, but his actions prior to and following that momentous event were anything but insignificant. From his base in Detroit, McKee energetically crisscrossed present-day Ohio and Indiana in the decades following the American Revolution in order to strengthen British alliances with Indian tribes and foment Indian resistance to American settlement beyond the Ohio River. He supplied Indians with goods and arms and helped organize his allies to meet the advances of General “Mad” Anthony Wayne.  In 1790 McKee negotiated the sale of Wyandot land at Detroit. Given his decades-long service to the British government, his well-documented diplomatic and military interactions with the Native Americans, and his close personal relationships among the Indians, Alexander McKee is a logical attribution for the initials “AM.”

Inscribed on the top of the tomahawk is the name “Syuontah.”  Various spellings of “Syuontah” appear repeatedly in the historical record between 1805 and 1870, each referring to a Wyandot headman or shaman.  His name is integrally associated with the Methodist Missionary at Upper Sandusky, Ohio.

Syuontah was not a signer of the Treaty of Greenville in 1795, but by 1805 had attained standing within the Wyandot tribe to be a signatory on the Treaty of Fort Industry, ceding lands within Indiana Territory.  On this treaty his name appears as “Tschauendah,” the least similar spelling to any of the other Anglicized references, though probably the closest spelling to the original Wyandot  pronunciation (“Treaty with the Wyandots, Etc,” United States Statutes at Large, Act of April 24, 1806, p 89).

Various Anglicized spellings appear multiple times in the historical record after 1805. These include the following: a receipt from the “Quarter Masters Department, North Western Army United States,” dated May 26, 1813, documenting the payment of $5 to “Scioontah a Wyandot Indian Dr. For taking up and Securing five horses belonging to the U.S. @ 1$ Each…” at Upper Sandusky, Ohio (Frohman Collection, Hayes Presidential Library); multiple references in Methodist missionary Reverend James B. Finley’s History of the Wyandott Mission to “Scionta”, a “high priest of the heathen party” who converted to Christianity in 1826 and worshipped with Finley in 1837 (Finley, 1840: 237, 336, 338-339, 368, 378); an 1829 list of “New Members and Donors to the Missionary Society” which includes “Synontah” and an 1833 “List of Members of the Missionary Society” which includes “Syuontoh” (Cox, 2016: 169-170; originally found in “Register of the Missionary Society at Upper Sandusky,” Center for Archival Collections, Bowling Green State University); and an 1870 William Walker “Memorandum” which contains the variations “Sy-u-on-taugh” and “Sy-u-on-toh,” and describes him as “an aged and highly respectable man…of the Snake tribe…” (Draper Manuscript Collection, Wisconsin Historical Society). Lastly, in what is considered one of the more comprehensive collections of genealogical material relating to the Ohio Wyandot, the records of the Thelma R. Marsh Collection list a “Sciona” though no other birth, marriage, death, burial, or parent data is recorded. Despite this, the available historic documentation as described above clearly points to one individual, a Wyandot headman who appears to have attained substantial stature and importance in his tribe, and as such likely was a recognizable figure to the Anglo-Europeans who were becoming increasingly active on the Ohio frontier following the American Revolution.

Finally, although sources vary slightly on active dates, the touch mark of “GW” found stamped in the silver diamonds on the haft, may represent the work of Philadelphia silversmith George Walker. Sources place Walker in partnership with his brother William from ca. 1795-1796, then indicate that he went out on his own by 1797 and remained active until at least 1810 and possibly as late as 1822 (Ensko, 1988: 271; Kovel, 1989: 385). The most common mark used by George Walker was an elongated rectangle with his name “G. WALKER,” however, this smith is also believed to have used a smaller touch mark featuring only his initials “GW” framed within a serrated rectangle as seen on the diamond-shaped inlays on this piece (Hamilton, 1995: 183). At least one other presentation tomahawk attributed to “GW” is known to exist (privately-owned, and with provenance of having been collected near Pittsburgh from a Delaware Indian).

While the complete history of the manufacture and ownership of this extraordinary relic will never be known, we believe the potential thread and timeline offered here is plausible.  That this belonged to the Wyandot leader Syuontah is beyond refute.  Given his position within the Wyandot, Syuontah would almost certainly have known Alexander McKee, the most important trader and representative of the British Crown in the Ohio Country.  McKee would have had access – and need – for important gifts for his Native American subjects.

Finley, Rev. James B. History of the Wyandott Mission, at Upper Sandusky, Ohio, Under the Direction of the Methodist Episcopal Church. Cincinnati: Cranston & Curts, 1840.

Nelson, Larry. A Man of Distinction Among Them: Alexander McKee and the Ohio Country Frontier, 1754-1799. Kent State University Press, 1999.

Haft missing two small circular inset elements, as well as one triangular silver element.  The shaft is dry, and has shrunk over time, allowing the friction set bands and mouthpiece to become loose.  The haft may have been cleaned at some time in its history, and “ghosts” of darker wood are visible beneath the silver bands.

The head is held in place by small four small forged tacks.  The silver end cap shows that it was at one time attached to the haft with three small tacks.  When these were lost, the cap was subsequently attached to the shaft with hand-forged nails.