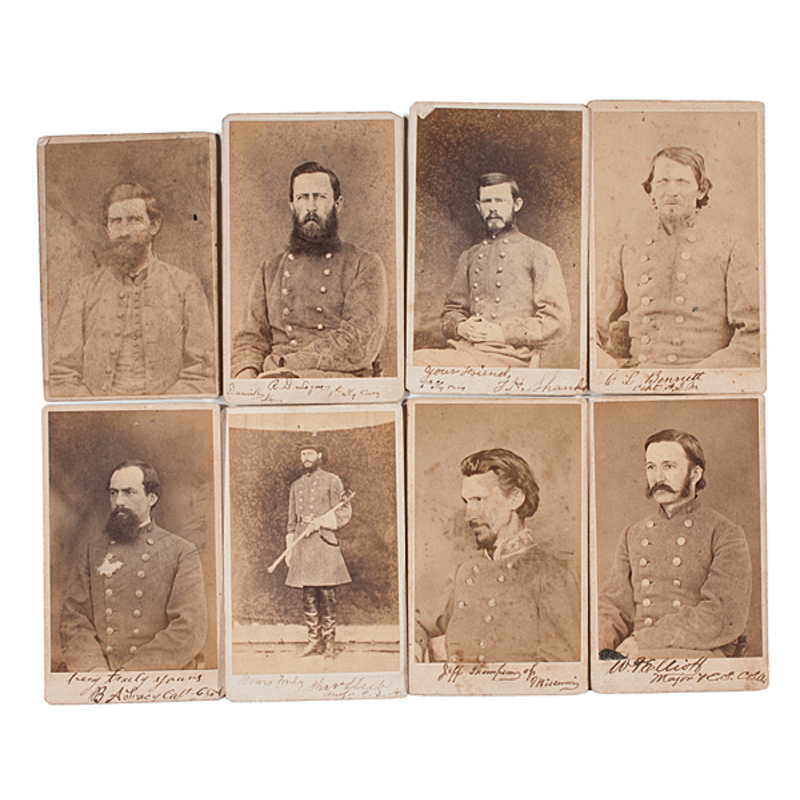 An incredible wartime compilation of 32 cdvs of mostly 6th Kentucky cavalrymen assembled by compatriot Captain M.B. Pierce (1829-1865), one of Morgan’s Men captured during the Great Ohio Raid and ultimately confined at Fort Delaware Military Prison with his pards. Accompanying the collection of uniformed raiders are three Lexington Leader newspaper clippings dating from 1934 and 1940 discussing an unrelated autograph album of Morgan’s Men together with an airy reminiscence of M. Brent Perkins of Somerset, the recipient of the many photographs bearing personal salutations from his fellow prisoners and comrade-in-arms.
All of the cdvs are ink signed and most bear the fancy gold imprint of John L. Gihon’s Art Galleries, Philadelphia on verso, the same backmark seen on other Confederate prisoner views from Fort Delaware. Several of the images are dated late May - early June 1864, suggesting a starting point for Captain Pierce’s album. The portraits reflect a broad vista of photography, some with eye-catching tinting showing a variety of gauntlets, wide-brimmed hats and even crutches, with several officers photographed holding “borrowed” Federal swords in artful yet defiant poses. The majority are members of the 6th Kentucky Cavalry, representing an important body of Bluegrass officers captured with Morgan at Buffington Island.
The first carte in the group is a weathered portrait of a heavily bearded, affable looking Captain Milton Brent Perkins. A native of Somerset in Pulaski County, Kentucky, Perkins had organized a company in the Southern leaning pre-war Kentucky State Guard commanded by Simon B. Buckner. Pierce was later commissioned Captain of Company C. 6th Kentucky Cavalry in September 1862 and soon afterwards rode with Morgan’s command during the battles of Perryville and Murfreesboro. Captain Perkins and most of his regiment was captured at (Cheshire) Buffington Island on July 19, 1863 near the end of Morgan’s Great Ohio Raid.
The enduring mystique surrounding Morgan—the bon-vivant Kentucky cavalier—remains unflappable, a subject of partisan debate even to this day. The details of Morgan’s spectacular, if militarily ineffective Ohio Raid need not be revisited here; suffice it to say that as consequence of their association many of these officers had quite colorful and interesting careers accounted for in the extensive Morgan bibliography.
Captain Pierce was first confined at the State Penitentiary in Columbus from which Morgan and a number of his men engineered an incredible escape on November 27, 1863. The young officer was too ill at the time to participate and was subsequently transferred to Fort Delaware with the rest of Morgan’s men. Unwilling to sign the obligatory “oath of allegiance,” the obdurate Captain Pierce was never exchanged and remained in confinement for the duration. A series of surviving letters between Captain Perkins to his sister and brother-in-law beginning in October 1863 (http://kykinfolk.com/pulaski) reveal “much of the feelings of the sick prisoner toward his own country, although great care seems to have been taken to avoid expressions of bitterness or criticism” to circumvent the censor. Perkins had contracted tuberculosis at some point during his imprisonment and in August 1865 was finally transferred to Camp Chase, Ohio and released. He returned to his native Somerset and lived briefly with his sister Barthenia Jane Perkins- Harvey and her husband before dying a few months later. The exact date of death is not recorded nor is the cemetery where Milton Brent Pierce was laid to rest at age 36.
The captain’s wartime friends and associates were:

Condition:The M.B. Perkins CDV is rough having been trimmed with heavy wear. The rest of the collection is G. or better showing moderate wearing and handling with rounded corners. Housed in original leather album.