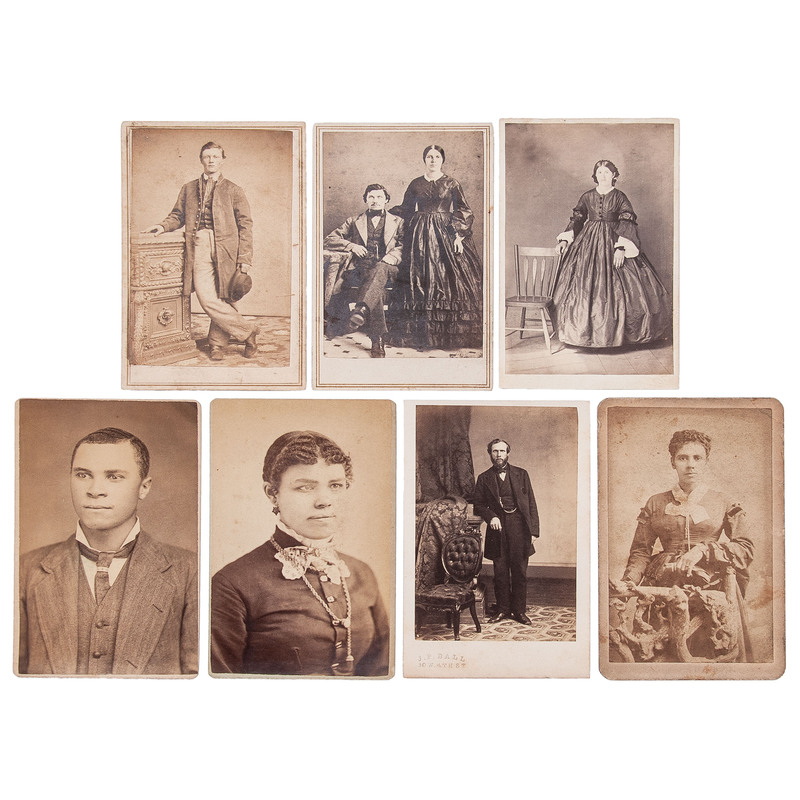 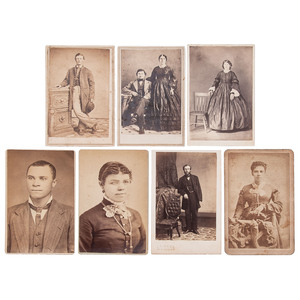 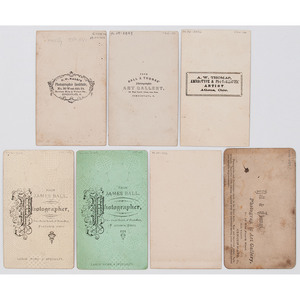 CDV studio portrait of an African American woman wearing a dress with a white collar, posing next to a rustic studio fence. Ball and Thomas: Cincinnati, Ohio, n.d., circa 1862-1868. No. 30 West Fourth Street imprint on verso. (Some soiling).

CDV studio portrait of a young white man wearing a long jacket, a striped tie, and holding a hat in his hand. J.P. Ball: Cincinnati, Ohio, n.d., circa 1865. No. 30 West 4th street imprint on verso. Pencil inscription tentatively suggesting the subject is with the 70th Ohio Volunteer Infantry.

CDV studio portrait of a couple, with the man seated while wearing a light jacket. The woman stands at his side, her hair parted in the middle and with a ruffled-dark dress. Ball & Thomas: Cincinnati, Ohio, n.d., circa 1858-1860. 120 West Fourth St. imprint on verso.

CDV studio portrait of a white woman wearing a full-skirted dress standing next to a wooden chair. A.W. Thomas: Athens, Ohio, n.d., circa 1862-1868. Imprint on verso.

James Presley Ball (1825-1904) is one of the most renowned African American photographers at one point owning the largest photographic gallery west of the Appalachians. When visiting White Sulphur Springs, Virginia in 1845 he met John B. Bailey, an African American Daguerreotypist from Boston where he acquired the passion and skill of photography. He opened a studio in Cincinnati later that year, and though it was unsuccessful, he continued his art with studios in Pittsburgh and Richmond and traveled as an itinerant Daguerreotypist. In 1849, he reopened a studio in Cincinnati. He hired his younger brother Thomas Ball to work as an operator, and in 1852 hired his future brother-in-law Alexander Thomas to work with him. By 1857, their gallery was one of the grandest in the United States attracting notables including Frederick Douglass. In 1887 Ball was chosen as the official photographer of a celebration of the 25th anniversary of the Emancipation Proclamation held in Minneapolis-St. Paul. In 1888, he moved to Helena, Montana with his son where he operated a studio for several years before moving again in 1892 to Seattle.