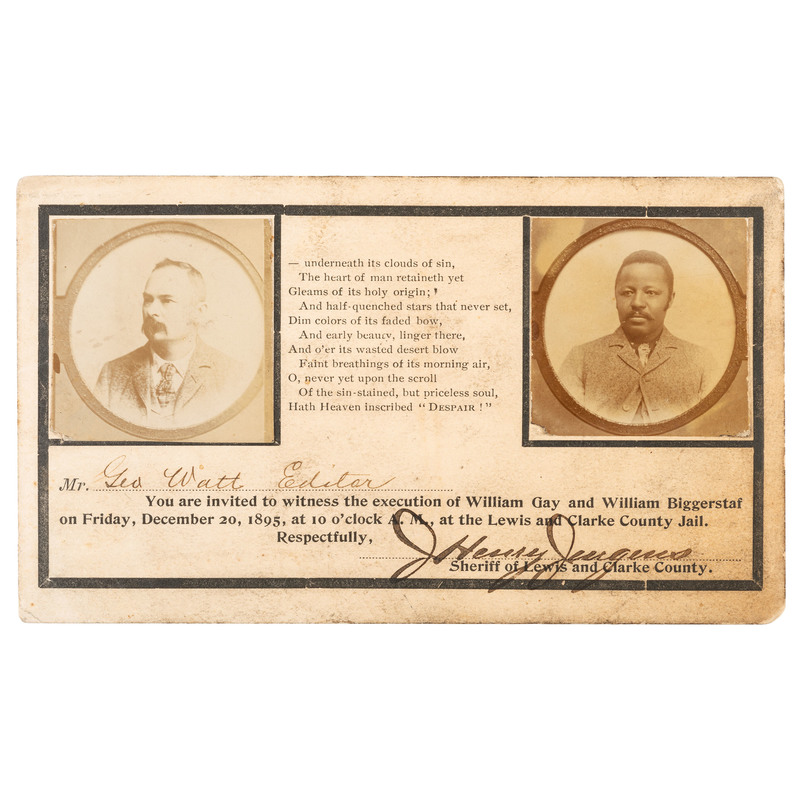 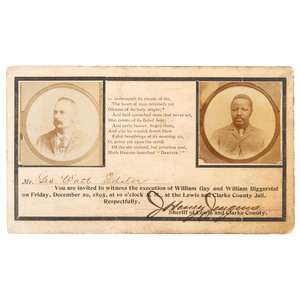 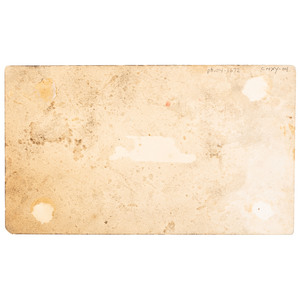 Invitation to an execution illustrated with two gelatin silver photograph vignettes of Bill Gay and William Biggerstaff (written with one ‘f’ on card), images attributed to J.P. Ball. Both men were condemned to be hung on Friday, December 20, 1895, at the Lewis and Clark County Jail. Signed by Sheriff J. Henry Jurgens. Addressed to “Mr. George Watt Editor,” caption reads, “You are invited to witness the execution of William Gay and William Biggerstaf on Friday, December 20, 1895, at 10 o’clock A.M., at the Lewis and Clarke County Jail.” Card: 6 x 3.5 in. (151 x 88 mm) with black ruled border. Images: 1.75 x 1.75 in. (43 x 43 mm).

William “Bill” Gay (1844-1896) was one of the few of the horde of other gold seekers who entered the Black Hills and actually struck it rich not far from Deadwood. A mining town grew up around his claim that became known as Gayville. Gay built a fine home there, filled it with furnishings from the East, and persuaded a dance hall girl from the Bella Union in Deadwood to move in with him. Not long afterward, Gay killed a rival suitor in a jealous rage. Sentenced to 10 years of hard labor, he was paroled after three years. Broke, he drifted to Helena, Montana, living a hard-scrabble existence working odd jobs. His luck finally turned again when he discovered a seam of coal near Castle, Montana. His claim was jumped, however, by Castle newspaper editor John Benson, and Gay retaliated by burning the newspaper office. A posse attempted to arrest Gay and an accomplice and a Deputy Sheriff was killed. While it is unclear if Gay was the trigger man, he was convicted, and sentenced to be hung in Helena on December 20, 1895.

William Biggerstaff (1854-1896) was a former slave originally from Lexington, Kentucky. According to reports of the era, he went to “the home of a woman of ill repute and found her alone with a jealous rival. A fight ensued in which the rival was killed with a revolver while in a struggle with Biggerstaff.” Though Biggerstaff would claim self-defense, he too was sentenced to hang, originally scheduled to share the gallows with Gay. Contemporary newspaper reports relate that the two men were even held in adjoining cells. This invitation is for the convicted men’s original execution date, but just two days before they were to be hanged, both received stays of execution, though neither indefinitely. Biggerstaff would meet his fate on April 6, 1896 in the Helena courtyard and Gay would swing on June 9, 1896.

These images were likely taken by J.P. Ball who was operating his gallery in Helena, Montana with his son at the time. Ball was involved in a movement advocating for the clemency of Biggerstaff and he would take photographs of both men’s executions in 1896. It is extremely likely that he provided these images as well.

Western lawmen frequently sent invitations announcing executions during the 19th and early 20th centuries, however, an invitation that has the attributes of this one is certainly unique. The inclusion of tipped-in photographs of the people to be hanged is uncommon. That the images were likely taken by an African American photographer makes it even more uncommon, and that it features men of different races makes it unprecedented.

Some toning and and slight soiling.