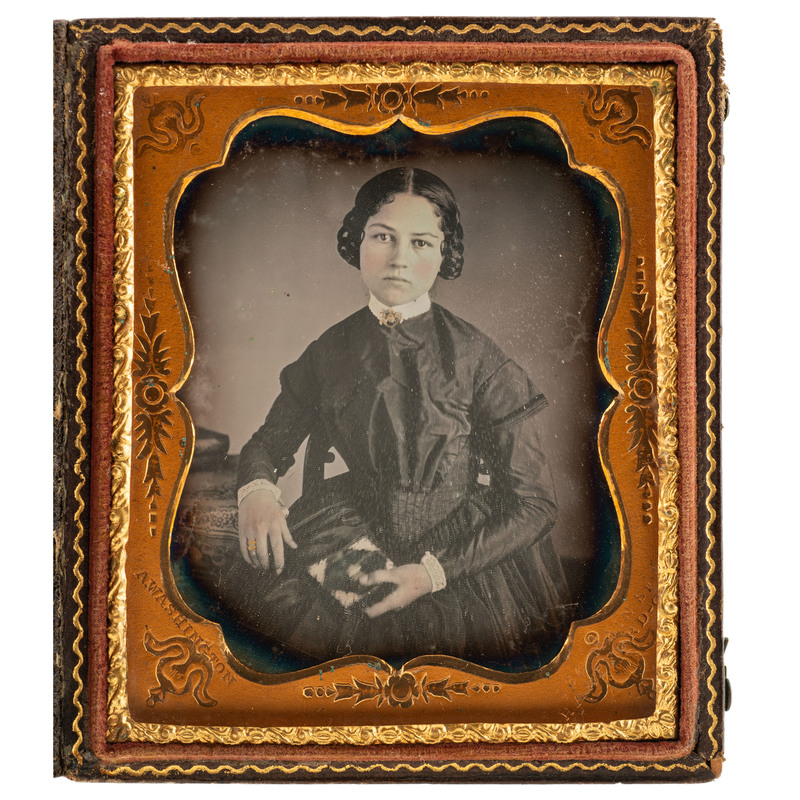 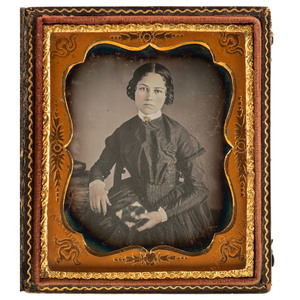 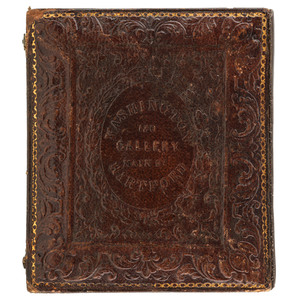 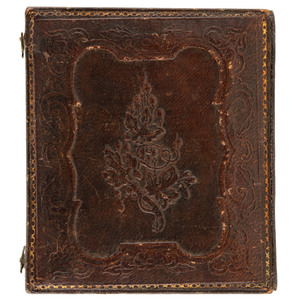 Sixth plate daguerreotype of a young woman. Augustus Washington (ca 1820/1821-1875): Hartford, Connecticut, n.d., ca 1850. The young woman wears a lovely black dress, as suggested by Washington to his subjects, and holds a union case (variation of Berg 6-173) in her lap. Her ring, brooch, and cheeks have been expertly tinted. Housed with original seal and glass with leather case and mat with the name and address of Washington's Hartford gallery.

Augustus Washington was an African American abolitionist, colonizationist, and despite a short career, esteemed daguerreotypist. Born in New York City, he was well educated and was heavily influenced by anti-slavery publications and abolitionists. He became skilled in the Daguerrean arts as a way to help fund his further education while at Dartmouth in Hanover, Vermont. He went on to open the first photographic studio in Hartford, Connecticut in 1847 and was hailed for his artistic excellence, capturing the likenesses of Hartford's elite. He is perhaps best remembered for his two portraits of abolitionist John Brown.

The plight of African Americans, however, was his primary concern. Slavery, of course, troubled him, but he also found consternation in the North as whites were being given more rights, and blacks fewer, in newly rewritten state constitutions. He did not think that abolition was the correct path, and instead preferred a separate home for blacks as "it would be better for our manhood and intellect to be freemen by ourselves than political slaves with our oppressors." In March 1854 he announced in the Hartford Daily Courant that he would be closing his Hartford studio, and he sailed to Monrovia, Liberia later that year. He brought along his photography equipment and supplies and would take beautiful portraits of Liberian notables including first president Joseph Jenkins Roberts, merchant Urias McGill, and others. Whether it was due to lack of supplies or interest, Washington abandoned photography after a year or two in Liberia. He turned his interests to education, teaching Latin and Greek to Monrovian youth, and farming, successfully growing rice, cassava, and sugar cane.

Hinge of case has been repaired with new leather. Daguerreotype still encased with original seal and was not opened to attempt any cleaning. Image shows some tarnishing around the edges.