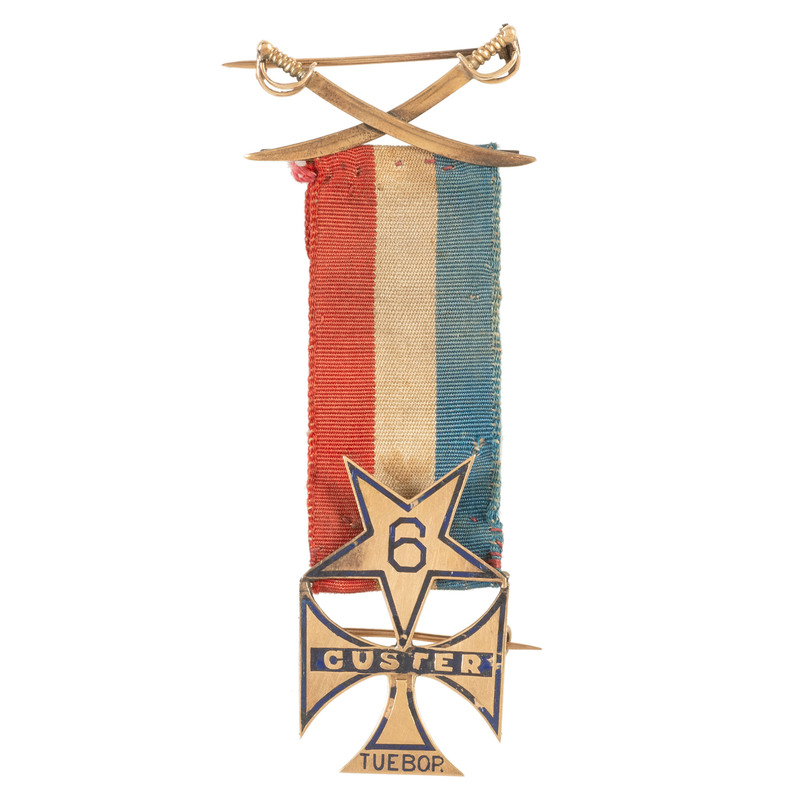 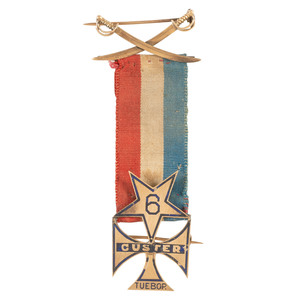 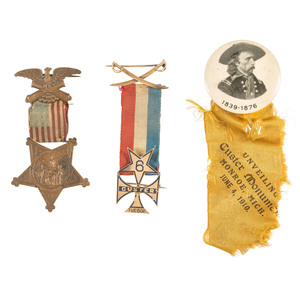 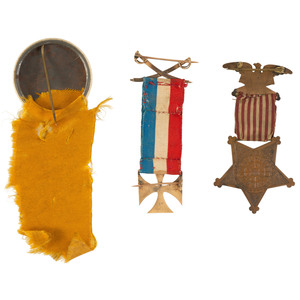 Except for the venerated Medal of Honor first instituted in 1861, the federal government did not sanction or otherwise award medals to military combatants during the Civil War period. The iconic Custer "Tuebor" Medal (Latin for "I will defend") is unquestionably the most enigmatic and positively the rarest of the handful of privately made wartime decorations that included the Kearny Medal, Kearny Cross, Gilmore, and Butler medals - the epitome of the Custer mystique.

In the shape of a Maltese cross beneath a five-pointed star representing Custer's rank as brigadier, the elaborate medal was made of gold inset with narrow bands of blue enamel along the edges. The center of the star bore an enameled regimental numeral with "CUSTER" on the centerline of the cross and the Latin "TUEBOR" on the bottom of the lower arm. The defiant motto was derived from the Michigan state seal adopted in 1836 and commemorated the prominent role of the Michigan Territory against the British and their Indian allies during the War of 1812. Except for the obligatory inscription of the recipient, the medal was plain on the reverse and was suspended from T-bar pin of gold crossed sabers highlighted by a deep yellow colored silk ribbon. The lower Maltese cross bore a second T-bar attachment pin. Overall, the medal measured 3.5 in. high, top to bottom, and was 1.25 in. wide.

Custer had designed his medal during the brigade's 1863-64 winter encampment at Stevenson, Virginia and left a series of rough sketches in his unpublished journal now in the collection of the Little Bighorn Battlefield National Monument. During the summer of 1864 as the Wolverines were engaged in the Shenandoah Valley Campaign, Custer personally commissioned the premier jewelry firm of Tiffany & Co., New York to craft a prototype. Serial medals were to be produced at the general's expense and awarded especially to meritorious members of the Michigan Brigade "at his specific behest." Unfortunately, little else of substance is known about the medal. Custer left no written stipulation of the award criteria. Tiffany archives do not contain any record of transactions nor do we know how many Custer Medals were ultimately created. Oddly enough, there is no formal or complete list of Wolverines (along with a few others) who received the Custer Medal. Whether or not some form of paper certificate or testimonial accompanied the medal pro forma is also unknown. We are completely in the dark regarding the circumstances of the award itself - intended to have been presented personally by Custer, or otherwise. Fortuitously, the perspective of one of the honored recipients, Colonel James H. Kidd, 6th Michigan Cavalry, was published in the June 17, 1865 edition of the Detroit Advertiser & Tribune. Colonel Kidd's letter to the paper embodied the essence of the award while reflecting the larger than life persona of its creator: "The gold in this badge is not more precious, it is not rarer, than the frankness, the generosity, the want of distrust which has always characterized your intercourse with me... The associations - the Michigan Brigade of Cavalry, its leaders, Custer, his deeds and theirs, are enough to make (the) gift one of inestimable value always."

Twenty-nine year-old Captain Albert T. Henshaw (1835-1913) - the recipient of the medal offered here - originally enlisted from Bowne, Kent County, Michigan as 1st sergeant of Company H on September 2, 1862. Prior to Gettysburg the senior NCO was promoted to 2nd lieutenant on May 5, 1863, and then to captain on July 1, 1864. Captain Henshaw was listed as wounded, date and place not stated, but this probably occurred during the later phase of the Shenandoah Valley Campaign. Evidently the wound was serious enough to require lengthy hospitalization. Henshaw was subsequently discharged for disability "on account of wounds received in action" on July 10, 1865.

After the war Captain Henshaw lived in several places in Michigan including Georgetown, Grand Rapids, and Traverse City. A wealth of genealogical information found online reveals that Henshaw had married (abt. 1860) Amy B. Duel and lived a fairly long but unassuming life, the father of two children, a daughter and a son. The 1860 Census recorded Albert Henshaw's occupation as "master carpenter" with assets of "$500 real estate; $60 personal property." By 1880 the tradesman had applied for an invalid pension, no doubt citing his war wound as cause. Later in life Captain Henshaw became a member of GAR Post #5 (Custer) in Grand Rapids joining the burgeoning national phenomena that afforded elevated status and a measure of political clout to an aging generation of esteemed Civil War veterans. Captain Henshaw answered the last roll call dying of heart disease at age 78 on January 6, 1913. He is buried in Oakhill Cemetery (Block 7, Lot 111, Space 5), Grand Rapids, Michigan.

The Custer Medal is the centerpiece of the lot. Measuring approx. .9375 x 1.5 in., the gold medal tests positive, at least 14K. It is engraved on the reverse side, "Capt. Henshaw / 6th / Mich. Cav." The medal shows evidence of a previous repair, crudely done in the area between the "S" and "T" of "CUSTER" on the centerline. The incorrect red, white, and blue ribbon should be yellow but has been attached to the medal for a considerable time. Accompanying the rare Tuebor Medal are Captain Henshaw's GAR membership badge together with a Custer celluloid with frayed ribbon commemorating the "Unveiling of the Custer Monument" at Monroe, Michigan, June 4, 1910 - confirmation that the captain was a lifelong Custer loyalist! Henshaw's medals were consigned by an anonymous Michigan resident and nothing else by way of provenance is known. Parenthetically, another Custer Medal to a member of the 7th Michigan Cavalry was sold by Heritage Auctions for $35,850 in June 2007, and Cowan's sold a Custer Medal and related items identified to Brevet Brigadier General James H. Kidd, 6th Michigan Cavalry, for $102,000 in June 2016.

Some tarnish on GAR badge.