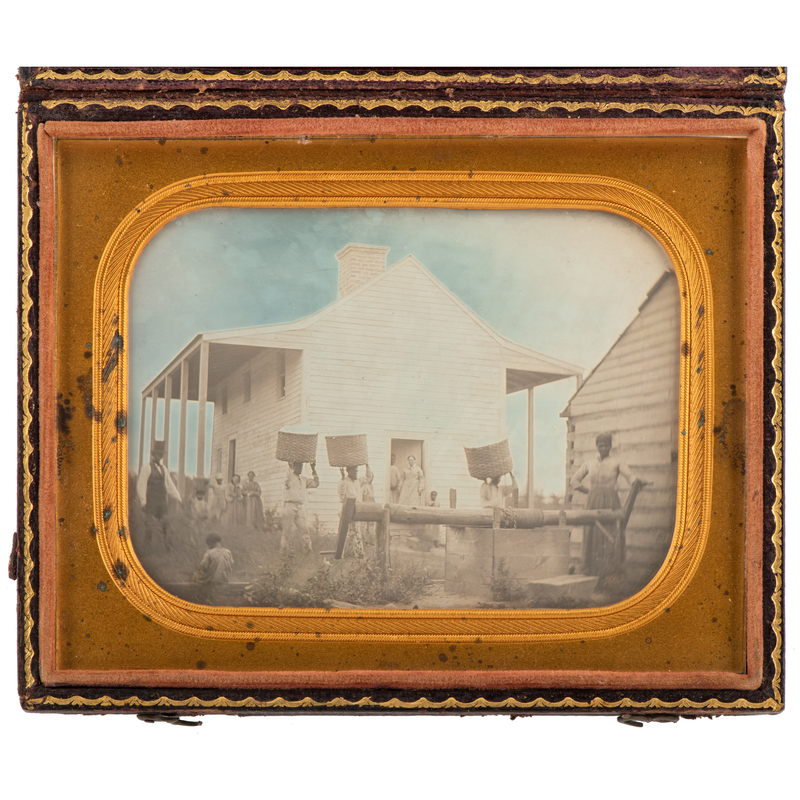 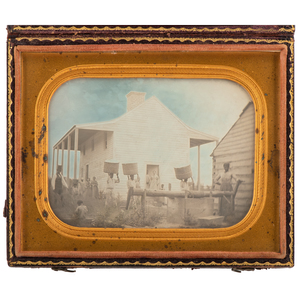 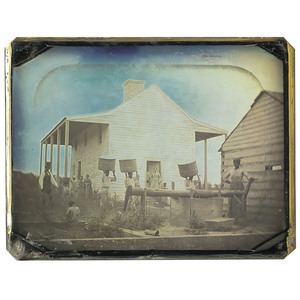 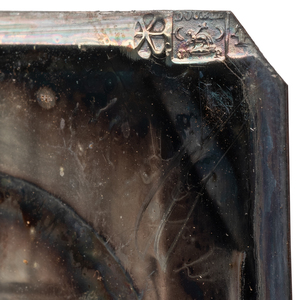 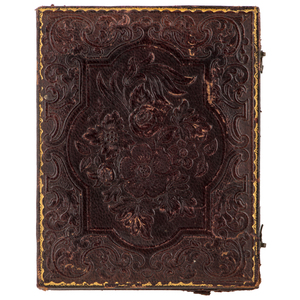 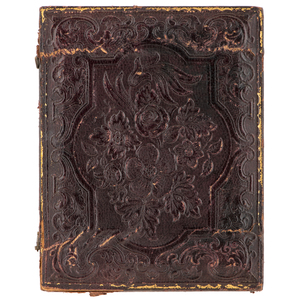 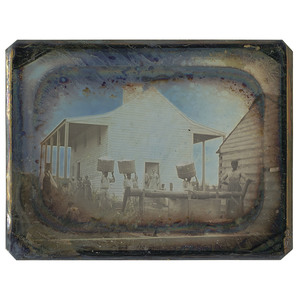 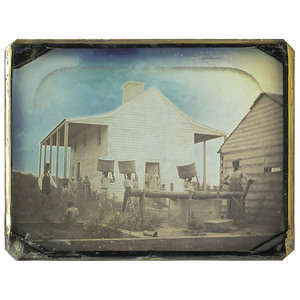 A Rare Antebellum Image of Slavery in Georgia, Believed to be the Earliest Known Image of Enslaved African Americans with Cotton

Though its exact provenance may never be known, this daguerreotype is believed to depict the rural Greene County, Georgia plantation of Samuel T. Gentry (1798-1873). Gentry moved to Greene County from South Carolina sometime between 1820 and 1830. By 1830 his family included six white members, and three enslaved African Americans.

While other Gentrys lived in Georgia at the time this image was taken, Federal Slave Schedules from 1850 and 1860 indicate a mere handful were slave holders. And only one -- Samuel  T. Gentry -- (sometimes listed as “Saml”) owned at least 10 slaves, the number depicted in this daguerreotype. From 1850 to 1860, Gentry owned between fifteen and eighteen men, women, and children.

At the time of this writing, the Gentry daguerreotype is the only known antebellum image showing enslaved African Americans displaying cotton, the agricultural product that dominated the economy of the Southern states and elevated a land-owner class through its cultivation. While other images showing the juxtaposition of enslaved African Americans and cotton are known from the Union occupations of coastal Georgia and the Carolinas, this image predates them.

More importantly, the Gentry daguerreotype documents slavery in a far more humble setting than the large coastal plantations depicted in post-Civil War images taken by Samuel Cooley and other photographers who accompanied the Union Army. In these Sea Island plantations, hundreds of slaves were owned by a small class of planter elites, providing their families with access to luxuries only dreamed of by the vast majority of Georgians. While this is the vision most Americans have of the antebellum south, the Gentry daguerreotype depicts a different reality.

At the beginning of the Civil War, only 37% of Georgia’s free families owned slaves; about 15% of these families owned more than 20, and the vast majority owned six slaves or fewer. The 1860 Federal Slave Schedule enumerates 8,398 slaves in Greene County, with 53 slaveholders owning more than 35 slaves each (about 35% of the total). The remaining slaves were distributed among 524 owners. Gentry is listed as owning real property valued at $2,900, and personal property valued at $12,000; presumably this latter figure incorporates the value of his eighteen slaves. Samuel Gentry was no mere yeoman farmer, but neither was he a member of the upper stratum of the planter class. In a world where wealth was measured by land and slaves, Gentry was simply a man who was striving for more; he was clearly “on his way up” the socio-economic ladder.

It is probable that Gentry commissioned this photograph to document his prosperity. The photographer carefully posed the scene so that the family “wealth” is clearly on display: ten enslaved African Americans are visible in the picture, with several displaying baskets of cotton perched atop their heads. Cotton – the production of which was made possible by Gentry’s slaves – is an integral part of the tableau.

Gentry himself is believed to be the man in the top hat at the left of the plate. He leans on a cane, held in his left hand. Below his knees movement is clearly visible -- perhaps a dog jumping and straining at a leash? Such a denizen would hardly be a surprising element of plantation life, where the threat of violence was an everyday part of enslavement.

The two-story building at center also figures prominently as a symbol of the Gentry family wealth. While not an imposing mansion, it is an integral element of the scene.  The end of the structure visible to the viewer lacks windows, suggesting an original two story building constructed of logs and later covered by lap board. The front and rear galleries are high and inset beneath the broken slope of the roof, the double-wing structure of which is commonly found in Georgia. The rows of tall, narrow posts on either side of the structure may have served as temporary supports for the roof, anticipating the later addition of a more elegant colonnade, or just as likely were a cost-sensitive attempt to refine the façade.

The log building in the foreground at right features half-dovetail notching, a construction technique prevalent throughout much of the south in the early and mid-nineteenth century. Short boards nailed end-to-end cover the upper logs of the exterior, suggesting an attempt to dress the cabin to match the residence, though not at the expense of using long milled boards; the lower portion of the cabin reveals its original character. This outbuilding contrasts with the main house and, whether as a smokehouse or slave cabin, adds to the rural nature of the scene.

A large well enclosed by unpainted planking  is visible in the foreground indicating that the residence lacked a cistern, a means of capturing water used by homes of a grander manner. The scale of the crank mechanism is large and features two handles, indicating the well had been deeply dug to reach a water-table consistent with an upland setting. This simple but necessary feature contrasts with the residence. No attempt has been made to present it as anything other than a functional element of daily life.

The daguerreotype captures Gentry’s rural status and achievements.  Between 1830 and 1860, his slave-holdings had increased from three to eighteen. This increase in wealth allowed him to cover his two-story log cabin with white painted clapboard, add a new roofline and build two large overhanging galleries supported by rudimentary columns to add dimension and vertical importance  to the building’s appearance. And yet, as the log outbuilding and crude well proclaim, Gentry’s socioeconomic status was impossibly distant from the wealthiest planters.

The world that Gentry and his family occupied forever changed with the Civil War and the Emancipation Proclamation. Two of Gentry’s sons,  Samuel Jr. and Robert A., enlisted in the Greene Light Guards, serving in Company I of the 8th Georgia Infantry. Little is known of  Samuel Jr.’s service; Robert was wounded twice and served the entirety of the war.  At war’s end both returned to a much diminished economic reality.  By 1870 Samuel Jr. was a tenant farmer living with a wife and daughter in nearby Hancock County with personal property valued at $375. Robert remained in Greene County, farming and caring for a family and his elderly father. By this time the family owned real estate valued at $2500 and personal property valued at $500. Samuel Sr. died in 1873.

This compelling and historically important daguerreotype was recently discovered in the Austin, Texas estate of Charles Gentry Jr. (1958-2012), who moved there from Rockmart, in Polk County, Georgia.

Numerous Gentrys have resided in the areas around Polk, Hancock, and Greene Counties, and we suspect the daguerreotype was passed from Charles Gentry Sr. to his son. How Charles Sr. came to own the image is unknown, though presumably  it passed by descent through a member of his patrilineal line.

Using the Gentry family in Georgia as a starting point, Federal Census and Slave Schedules were used to pinpoint the most logical original owner of the daguerreotype. These data indicate that Samuel T. Gentry was the only  Gentry in antebellum Georgia who owned enough enslaved African Americans to qualify as the subject matter of the daguerreotype.

The daguerreotype was professionally conserved in 2019 by Dr. Mike Robinson of the Century Darkroom, Toronto, Canada. A summary of the treatment is listed below: