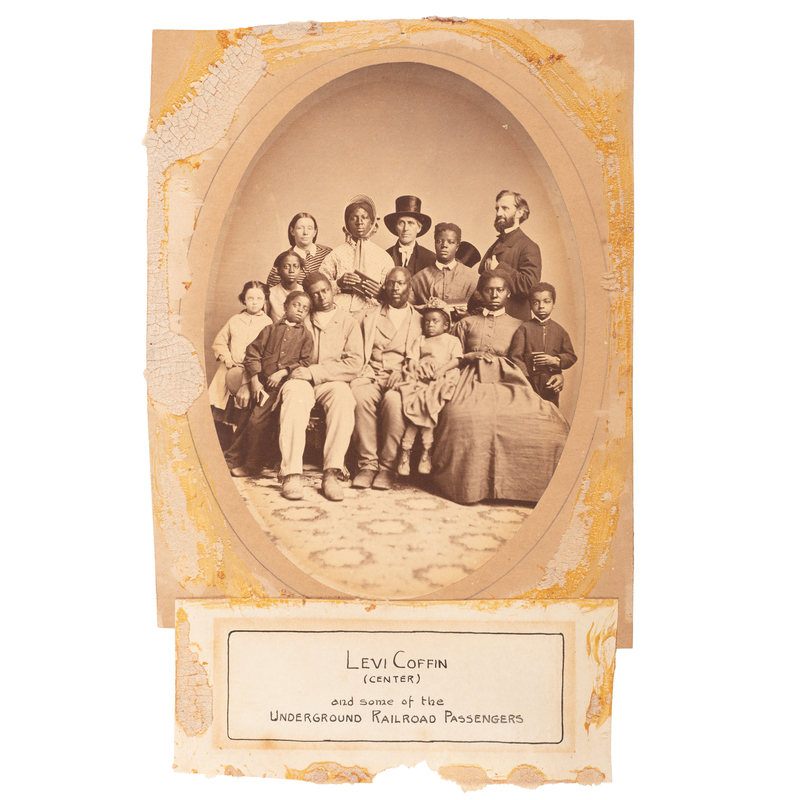 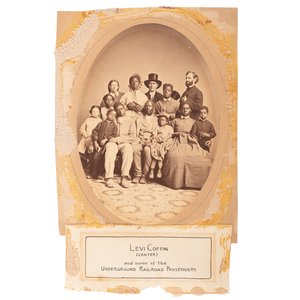 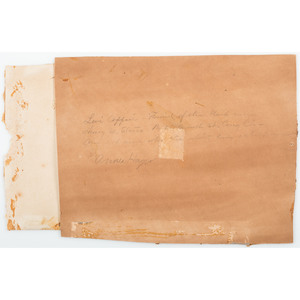 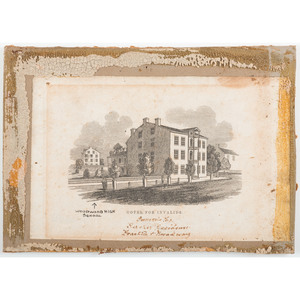 Lot of 2. Oval albumen photograph, approx. 5.25 x 7.5 in., adhered to cardstock with attached paper label, approx. 6.625 x 10.5 in. overall. Label identifies central figure in top hat as prominent abolitionist Levi Coffin ("Levi Coffin / (Center)"), pictured with, "some of the / Underground Railroad Passengers." Pencil inscription on mount verso reads in part, "Levi Coffin - Friend of the black race / Henry M. Storrs - Pa[stor] to Seventh St. Cong Ch- / Are not sure who the white lady and child are."

Levi Coffin (1798-1877) was born into a Quaker family in North Carolina and became a strong supporter of the anti-slavery movement because of his religious beliefs. Beginning as a teenager, Coffin helped fugitive slaves find safe passage north to freedom. He married Catherine White in 1824, and, two years later, the couple moved to Newport in the free state of Indiana, where they became heavily involved in abolitionist groups, including serving as guides along the Underground Railroad. At the time, three major river crossings on the Underground Railroad converged in Newport, with three corresponding routes north out of the city. During his time in Indiana, Coffin purportedly helped some 2,000 individuals escape slavery. In 1847, the Coffins moved to Cincinnati, OH where they opened a business that sold only goods manufactured by free laborers. Levi Coffin continued his work as a conductor on the Underground Railroad, helping another 1,300 individuals evade capture. In addition, he helped found an African American orphanage in Cincinnati and played an integral role in the establishment of the Freedman’s Bureau.

Though mount inscription suggests that the tall man at right is Henry Martyn Storrs, (1827-1894) a supporter of freedmen's aid organizations and pastor at the First Orthodox Congregational Church, located on Seventh Street in Cincinnati, research indicates that noted abolitionist and Free Presbyterian minister Jonathan Cable is actually pictured. Cable (1799-1884) was born in Hartford County, NY and moved with his family to Ohio in 1803. He studied at Ohio University in Athens, OH before pursuing theological studies at the Union Presbyterian Seminary in Richmond, VA. Cable's experiences living in a slave-holding state would inform his ardent opposition to the institution later in life, and he grew increasingly outspoken about his beliefs. Upon his return to Ohio, Cable began to participate in the National Christian Anti-Slavery Convention and other abolitionist organizations, where he met like-minded figures within the movement, including Coffin and Underground Railroad conductors John Van Zandt and John Todd.

Beginning in the early 1850s, Cable opened his home in College Hill to fugitive slaves and collaborated with Coffin on the "Escape of the 28" of 1853, a particularly ambitious operation to convey twenty-eight enslaved men, women, and children from Boone County, KY safely north to Canada. On April 2, 1853, renegade anti-slavery activist John Fairfield brought a group of slaves across the Ohio River near Lawrenceburg, IN and traveled with them to the outskirts of Cincinnati. From there, he contacted Coffin and John Hatfield, a black barber and leader of Cincinnati’s Vigilance Committee, who would assist the group on the next leg of their journey. Hatfield and Coffin acquired two coaches and helped the fugitives assume the guise of free blacks taking part in a funeral procession to the Wesleyan Cemetery, an integrated burial ground in Northside. The group then dispersed among different Underground Railroad stops, including Cable’s home, where they would be safely hidden before making their way to Canada. In addition to shelter, Cable also provided the fugitive slaves with new clothing and shoes to combat the inclement weather they faced. Despite the reward of $9,000 offered by the Kentucky slaveholders for the recovery of the group, all twenty-eight arrived safely in Ontario on April 19, 1853.

Though the individuals shown here with Coffin and Cable cannot be definitively identified as members of the “Escape of 28,” they likely benefited from Coffin and Cable’s involvement in abolitionist groups and the Underground Railroad.

Also with print, 8 x 5 in., mounted to 9 x 6.25 in., featuring the Hotel for Invalids, with manuscript notations identifying it as "formerly the / Rucker Residence / Franklin Broadway" and indicating the "Woodward High School" in the background. The Hotel for Invalids was originally constructed in 1831 as a boarding house in conjunction with Woodward High School, Cincinnati's first public high school. Various faculty members lived there, including Professor Henry Rucker, until the building was repurposed as a hospital in the 1840s. Shuttered in the early 1850s, the hospital reopened briefly as St. John's, the city's first private hospital, though it soon required a larger facility and was relocated downtown. From 1856 until 1863, Levi Coffin took possession of the building, returning it to its original function as a boarding house used to shelter runaway slaves.