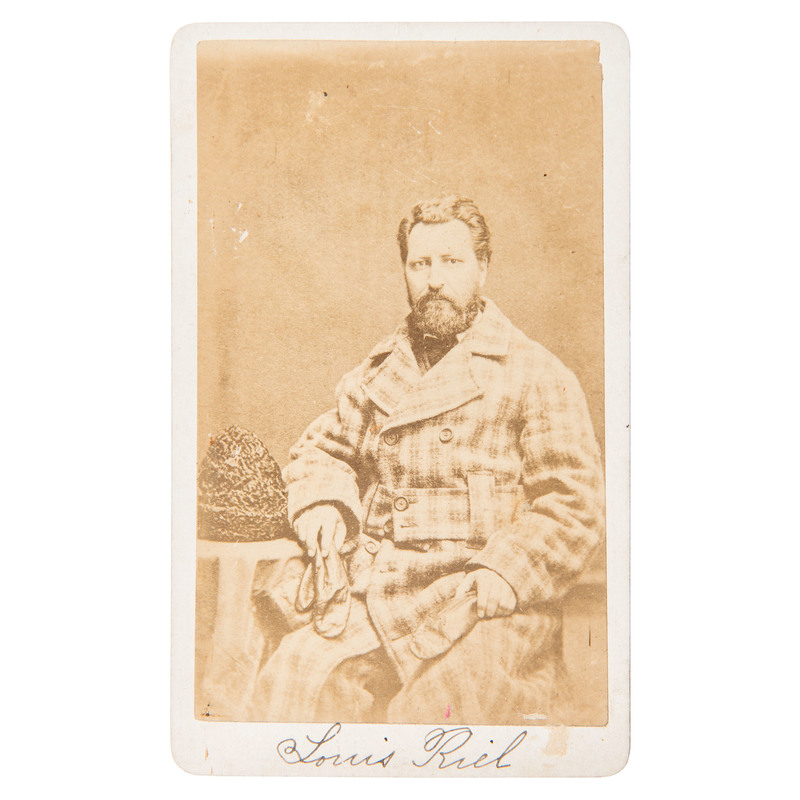 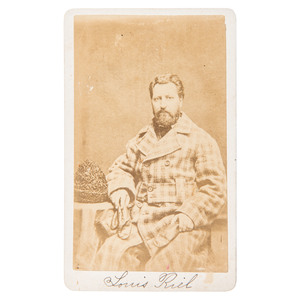 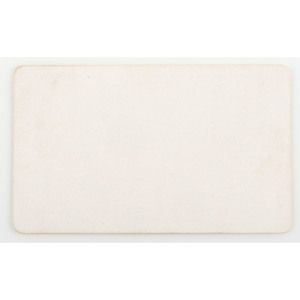 Autographed CDV bearing the portrait of Louis Riel (1844-1885), a Métis spokesman, teacher, and key player in Canada's Red River and Northwest Rebellions of 1869 and 1885. Riel appears dressed in a plaid double-breasted coat, holding leather mittens and with a fur hat resting on a nearby table. Ink signed, "Louis Riel" on mount below photograph.

Riel is best known as a leader of the Métis, descendants of indigenous peoples and Europeans living in Western Canada, and was instrumental in their struggle against annexation of the Red River Colony. In response to Canadian expansion westward, the Métis claimed rights to a portion of the disputed land and refused to recognize the authority of the Canadian government. When a party of surveyors arrived at the Hudson Bay post of Fort Garry (present-day Winnipeg) in the fall of 1869, they were met with resistance from a provisional Red River Colony government led by Riel. In early October, Riel’s supporters organized The Métis National Committee and routed the survey party to the United States border, forcing them to retreat to Pembina, Dakota Territory. Riel went on to lead negotiations with the government on behalf of the Métis, presenting a list of rights that would guarantee their autonomy in the event of annexation. The resulting agreement placed the Red River Colony, now known as Manitoba, under Canadian control, but as a self-governing province. The Northwest Rebellion, however, was appreciably less successful: the government quickly suppressed Riel and his followers, who opposed Canadian rule of Saskatchewan, and Riel was tried and executed for treason.

In 1877, between the two rebellions, Riel was institutionalized briefly for mental illness at the Beauport Asylum. Upon his discharge, he traveled to the United States, where he began sending CDVs, some signed, to his friends and family, partly in recognition of their support during his time at Beauport. Correspondence from Riel, currently housed in the archives of La Société Historique de Saint-Boniface, Manitoba, confirms that Riel was in the United States during the first few months of 1878 and suggests that this photograph, which he describes in a letter dated March 1, 1878, was taken in Keeseville, NY. Further correspondence in 1878 between E.A. Bernard and Louis Riel (February 20, 1878) and again between Mr. Vincelette and Louis Riel (March 17, 1878) confirms the affinity that both men had towards Louis Riel and the gratitude they had for all his efforts in providing the signed CDVs for further fund raising efforts.

Today, the only other known copy of this CDV, also bearing Riel's autograph, is held in the National Archives and Library of Quebec. This signed CDV was found in Levis, Quebec, only a few short miles from Beauport.

Minor surface blemishes, including staining and areas of abrasion.