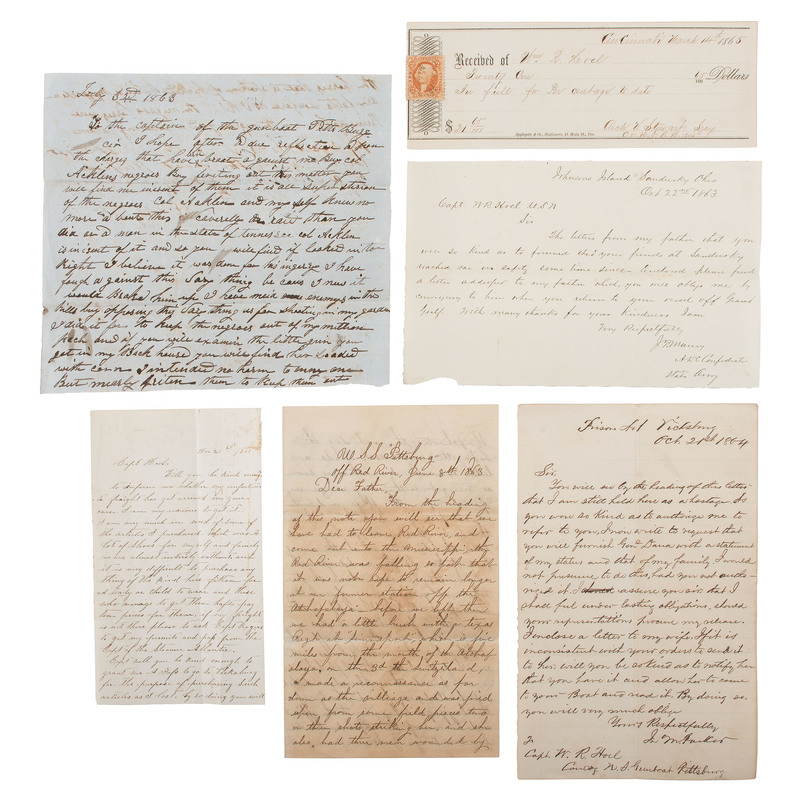 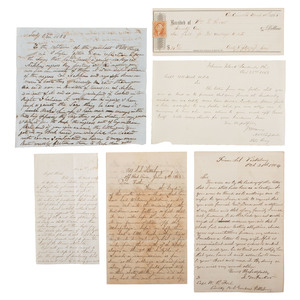 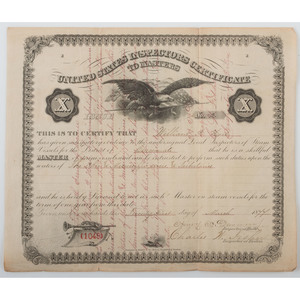 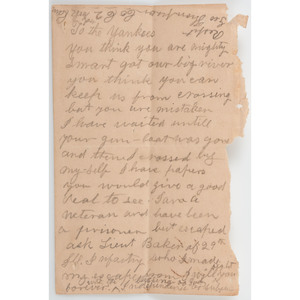 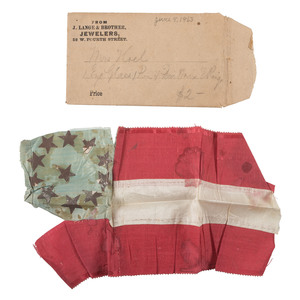 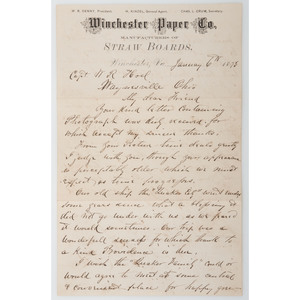 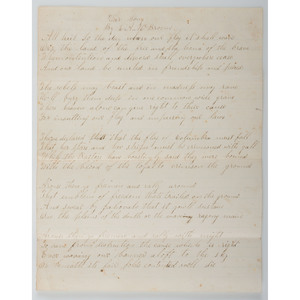 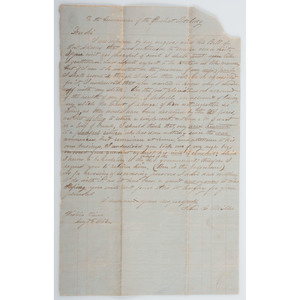 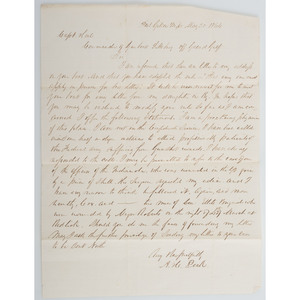 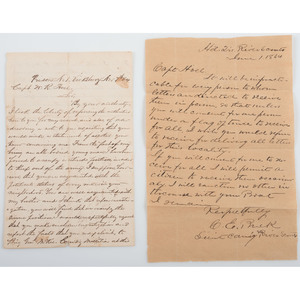 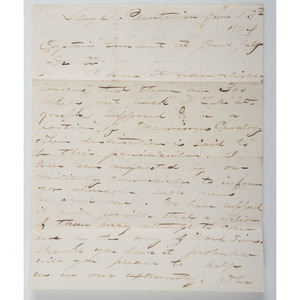 Lot of 80+ letters, documents, and ephemera related to Captain William Rion Hoel (1825-1879), a steamboat pilot who served as part of the USN's Mississippi River Squadron during the Civil War. Lot includes more than 65 war-date letters most of which were written to Hoel while he served as commander of the USS Pittsburgh and later the USS Vindicator. Also included are more than a dozen personal documents spanning approximately 1853-1876 and a Confederate First National Flag measuring approximately 8.25 x 4.5 in.

A native of Ohio, Captain William R. Hoel followed in his father's footsteps becoming a steamboat pilot and mastering riverboat navigation. He was one of the earliest licensed pilots when he received that designation in January 1853.  Hoel volunteered as a civilian pilot of the US timberclad Lexington on October 19, 1861, and quickly distinguished himself. While serving as First Master of Cincinnati, he was wounded during the Battle of Fort Henry and two months later on April 4, 1862, he volunteered to pilot the gunboat Carondelet in her famous run past Rebel batteries at Island Number 10.

It was as commander of the Pittsburgh that Hoel's reputation as a bold and fearless commander was further cemented. On April 29, 1863, Hoel skillfully slipped the Pittsburgh in between Acting Rear Admiral Porter's flagship Benton and the devastating Confederate bombardment that had rendered the Benton unmanageable. Taking the fire upon his own vessel, Hoel allowed the Benton to extricate herself from the Confederate trap and move to safety. With his heroic actions Hoel ensured the success of Porter's bombardment of Confederate Batteries at Grand Gulf, and allowed General Ulysses S. Grant to safely move his troops across the Mississippi River in preparation for operations against Vicksburg. In November 1864, Hoel would be promoted to Acting Volunteer Lieutenant Commander. He was detached from the Pittsburgh and placed in command of the Vindicator on March 1, 1865, on which he served until the end of the war.

The letters in the archive primarily span 1863-1865 and are written to Captain Hoel. While the correspondence does not include details of Hoel's most intrepid military actions, it does paint a fascinating picture of his role as a military commander in Southern territory. Letters in the collection indicate that Hoel had responsibility for distributing mail across North/South lines and through Union-held Southern territory. Many correspondents are southerners asking for his assistance. Writing on May 31, 1864, to "Capt. Hoel / Commander of Gunboat Pittsburg off Grand Gulf," one doctor implores the commander to modify his rule "that any one must apply in person for his letter.... I am not in the Confederate Service," the doctor continues, "I have been called on in some half a dozen instances to attend professionally patients of the Federal Army suffering from gunshot wounds. I have always responded to the calls." Among other inquiries, Hoel is called upon to assist a POW, to allow bodies to be retrieved under a flag of truce, and to help civilians in personal matters.

Hoel's archive contains letters from other Civil War soldiers, including an undated letter from a Confederate soldier who wished to taunt his Union counterparts: "To the Yankees / you think you are mighty smart got our big river you think you can keep us from crossing but you have mistaken I have waited untill your gun boat was gone and then I crossed by my-self I have papers you would give a good deal to see...I will fight you forever with the blessing of God...Respt Geo. Thompson Co. C 2nd Ark Cav." Also of interest are two songs, "War Song" and "Call for Volunteers," which were composed "By L. A. McBroom." Lewis Asbury McBroom of Hocking County, Ohio, enlisted as a Corporal with the OH 58th Infantry in 1861 and starting in 1863 served in the Department of the Tennessee with the Iron Clads Mississippi Squadron.

Subsequent to the war, Captain Hoel returned to Waynesville, Ohio, his home just north of Cincinnati. He continued as a steamboat pilot, operated his model farm Kildere, and established himself as a prominent member of the community. Notably, in 1867 Captain Hoel was a passenger on the ship The Quaker City when it embarked upon a months-long pleasure cruise to Europe and Palestine. Among the other passengers on board was Mark Twain whose first book, The Innocents Abroad, was based upon this excursion. An 1873 letter to Hoel from William R. Denny, a fellow passenger on The Quaker City whose diary famously described the voyage, is included in the archive.

Roel married twice, first to Mary Riley in 1849 and then in 1869 to Elizabeth Hunt (1840-1904). Hoel and Riley's 1849 marriage certificate and cemetery records from their young son are included among the personal documents in the collection. Several letters in the collection are from Elizabeth Hunt's father, Dr. Samuel Pancoast Hunt, to his daughter. Though Dr. Hunt writes to his daughter on March 20, 1869, speaking favorably about his new son-in-law, Captain Hoel was by many accounts a volatile and jealous husband. Hoel's life ended abruptly in 1879 when he was shot with his own revolver during a struggle with a doctor Hoel believed was having an affair with his wife.

The Confederate First National flag accompanying the archive appears to have been stitched along the edge to accommodate a narrow wooden dowel holder indicating it may have been used as a parade flag of some sort. The eleven stars which mark the flag as a very early secession flag are appliqued cut-outs and appear to have once been gold or gilded. The flag itself is likely made of silk.