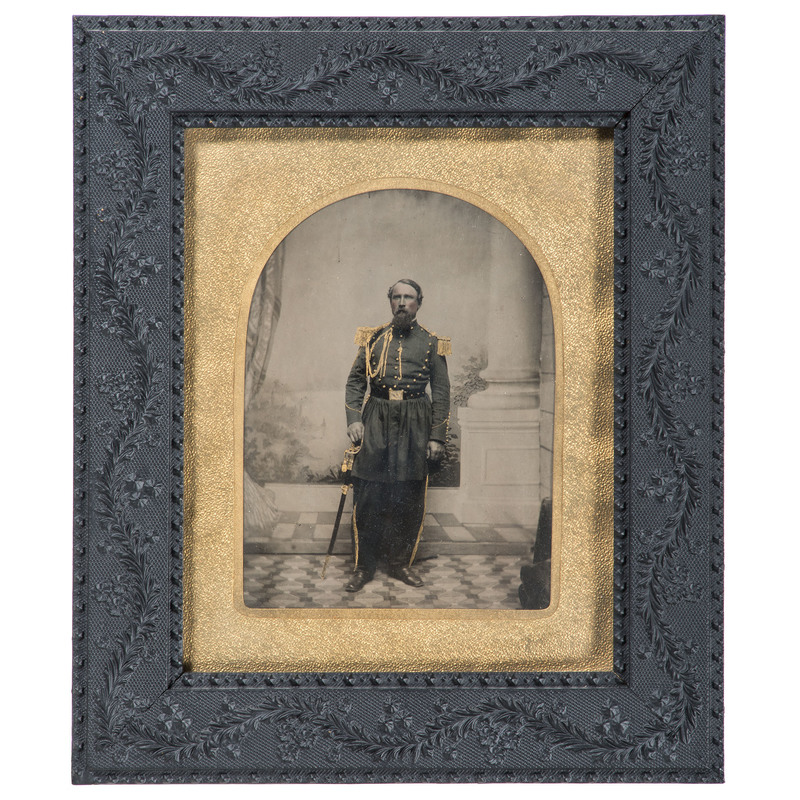 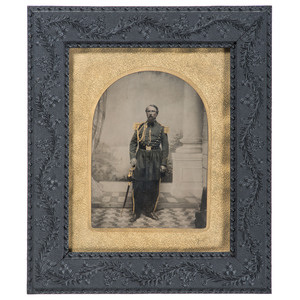 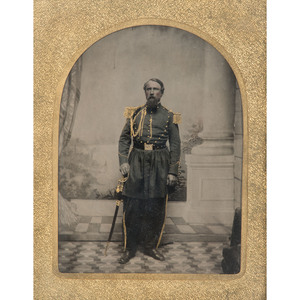 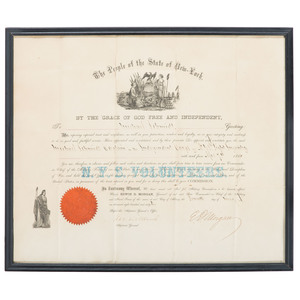 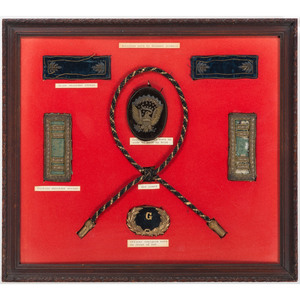 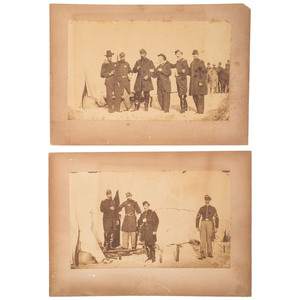 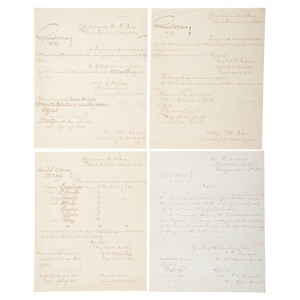 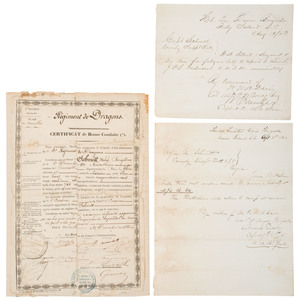 The centerpiece of the comprehensive collection - particularly to image collectors - is the fine early war full plate ambrotype of Schmitt wearing the officer's version of the battalion's distinctive French inspired chasseur uniform. The image is housed under a gold mat in a decorative hanging frame, 11.5 x 13.5 in.

Photographed in the field sometime in 1863 are a pair of companion outdoor albumen photographs, each approx. 4.25 x 7 in., on 6.5 x 8.75 in. mount, credited to "Haus & Peale, Morris Island & Hilton Head," showing the major casually posed with fellow soldiers in a sparse camp scene during the siege of Charleston.

An anecdotal mixture of approx. 30 documents, letters, and imprints is highlighted by Schmitt's French Army "Certificat de Bonne Conduite" dated December 31, 1848, attesting to his former service in the 4th Regiment of Dragoons. A New York State Militia document appointing Schmitt a private in Co. K of the Gardes Lafayette, dated September 4, 1851 is present, as well as Schmitt's original New York state captain's commission dated May 7, 1862, 14.75 x 17.75 in. including frame. Five single page manuscript orders reflecting the drudgery of army routine during Charleston operations are also included among other war-date documents.

An array of personal items include a liquor flask, a short brass telescope and case, a single volume of Casey's Tactics along with the captain's company day book containing a roster and inked notations under tattered leather fold-over cover.

Organized in New York City in April 1862, the battalion was present during the Peninsula Campaign as garrison troops but was not otherwise engaged. Les Enfant Perdus was then detached from the Army of the Potomac and assigned to the Department of North Carolina as part of the 18th Corps. The battalion saw very limited action through January 1863 when once more, the unit was shifted to the Department of the South, now assigned to an active theater of operations joining in the siege of Charleston undertaken by the 10 Corps. Beginning in July 1863 the battalion participated in the attack on outlying Morris Island (of Glory fame) followed by successive siege operations against the Confederate defenders of Fort Wagner and Fort Gregg, then the bombardment of Fort Sumter and Charleston in combined operations with the Navy. During the summer and into the late fall, the Enfant Perdus sustained nine men killed and mortally wounded and fifteen lesser wounded. The battalion much reduced by sickness served briefly at Hilton Head before the remnants were absorbed into the 47th New York Infantry on January 30, 1864 ceasing to exist as a separate unit. Michael Schmitt had joined the battalion as captain, Company F, on April 7, 1862, was promoted to major (commanding) on May 1, 1863, and mustered out as supernumerary on February 5, 1864 upon consolidation.

Very little is known of Schmitt's post-war activities. An Alsatian by birth, the immigrant is shown in the 1875 New York Census as married with three teenage children living in the Buffalo area. The 1885 New York Census has him working as a lead glazier. No record of a military pension application could be found. Michael Schmitt was 72 when he died in Rochester, New York on April 6, 1893. He was interred in Rochester's Holy Sepulchre Cemetery (Section D, Grave 29L).