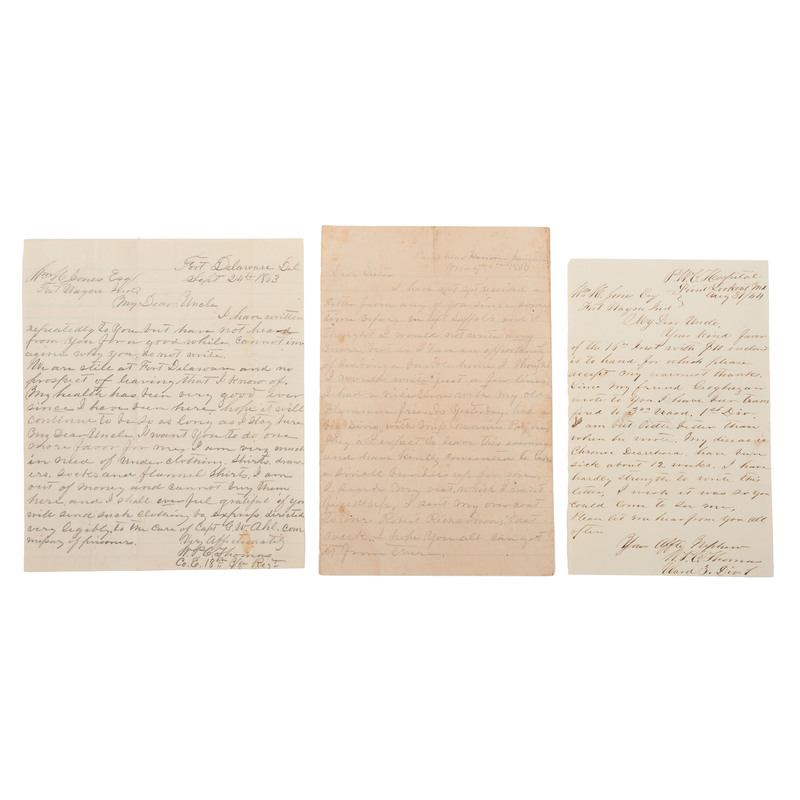 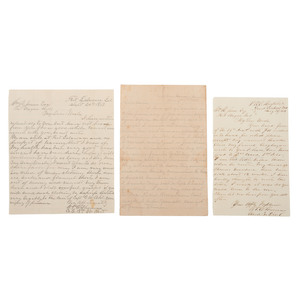 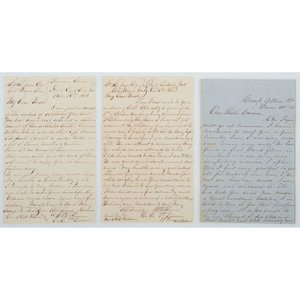 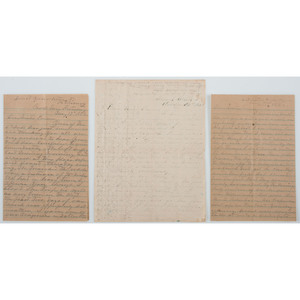 Lot of 9 letters written by Confederate soldier William P.C. Thomas (ca 1838-1864) of Fluvanna Country, Virginia. Thomas enlisted as a private in 1861 and mustered into Company C, 14th Virginia Infantry. With this unit, he fought at Seven Pines and Malvern Hill before transferring into Company E, 18th Virginia Infantry on June 28, 1863. Thomas was captured during the Battle of Gettysburg and died as a prisoner of war on September 13, 1864 at Point Lookout, Maryland. In his letters, spanning 1861 to 1864, Thomas writes to his sister Emma (1844-1918) and his uncle, William H. Jones (1819-1886), about his experiences in battle and as a prisoner in Maryland.

In his early letters, Thomas shares descriptions of his health, nostalgia for home and family, anticipation of letters, names of men killed, weather, etc. On June 20, 1861, he tells Emma that "there is a strong probability of my joining a brass band for the benefit of this Regiment," a prospect that renders Thomas "highly delighted" and provides much needed respite from the hardships of camp life. By May of 1862, Thomas and his unit are stationed outside of Richmond, where they begin to see substantial action. Writing to his sister again, Thomas explains how the battle unfolded: "The old 14th made a splendid fight. The fight commenced about 2 o'clock on Saturday. . . the enemy was repulsed about dark Saturday evening. We took their camp and everything they had. . . I have no idea how many men were engaged one each side. I have no idea how many were killed and wounded, but I can assure you the field was an awful sight. The fight was resumed Sunday morning but did not last long. We succeeded in driving back the enemy in about 2 hours. All of our forces that were engaged in the fight were then relieved and were sent back to their old camps. . . Nearly half of our men that were engaged in the fight are almost completely exhausted and sick. They have not slept any for four nights and have not had anything to eat. . . I tell you times are awful with us."

From Richmond, Thomas and his comrades made their way to Suffolk and then marched to Petersburg, averaging about twenty miles per day with hardly any rations, save for "hard crackers and cold water." He expresses regret over leaving Suffolk and even seems to doubt the worthiness of the Rebel cause: "What do you all think of the present state of our Confederacy? I greatly fear that it is beginning to seem down at the heel."

Shortly after his transfer to the 18th Virginia Infantry, Thomas was engaged at Gettysburg and taken prisoner on July 3, 1863. His next letter was sent from Fort Delaware, a Union prison camp for Confederate soldiers. He wrote to his uncle, an attorney in Fort Wayne, Indiana, two months after his capture, noting that there was "no prospect of leaving." By November of 1863, however, Thomas had been moved to Point Lookout, Maryland, which he "like[d] much better than [he] did Ft. Del." Despite previous reports of robust health, the following August found him hospitalized with "chronic diarrhea." Having been ill for twelve weeks, he tells his uncle that he "hardly has strength to write." Thomas ultimately succumbed to disease on September 13, while still imprisoned at Point Lookout.

Brittleness and creasing as expected. Pencil and ink used. Handwriting is generally legible, though author has written over previous lines to save paper, in some cases.