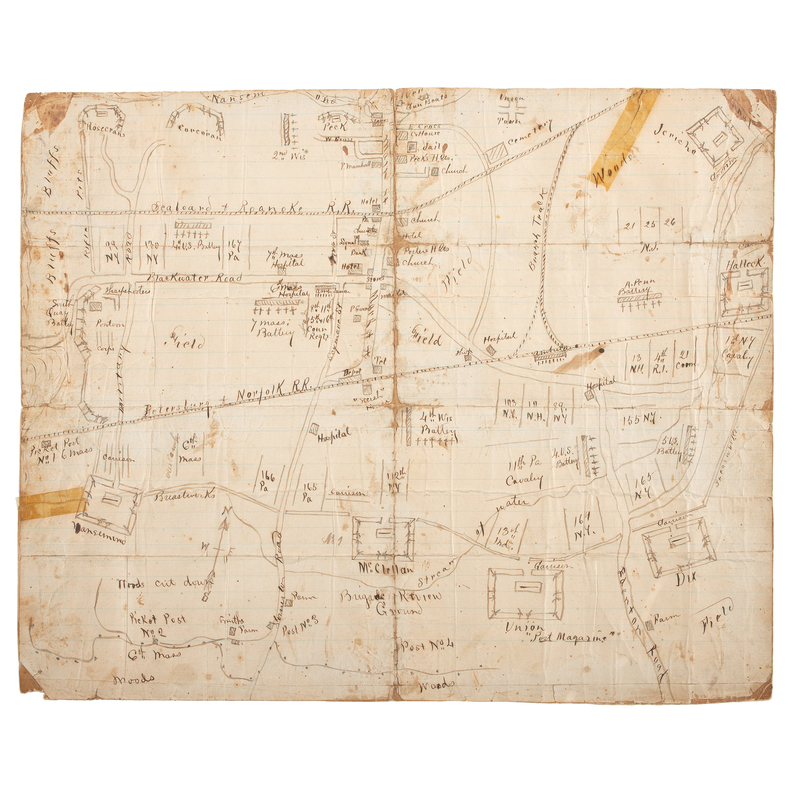 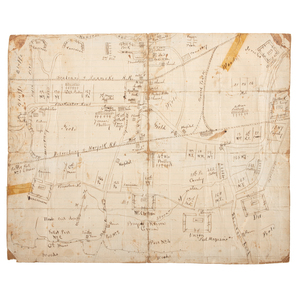 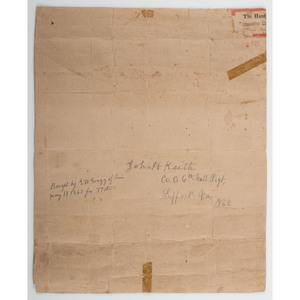 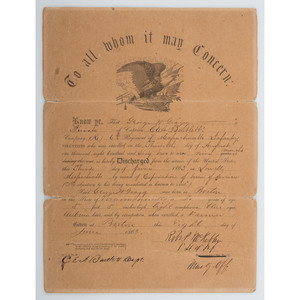 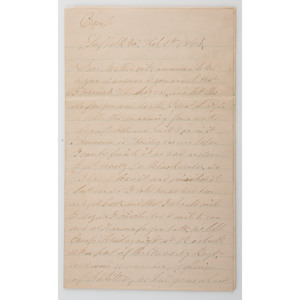 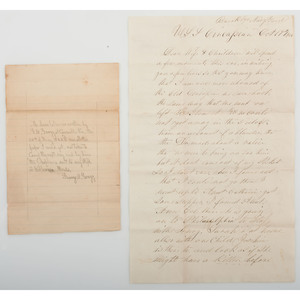 Pen and ink map, 12.5 x 15.25 in., on two sheets of notebook paper laid on cigar paper. A highly detailed map showing the position of each regiment present at Suffolk, as well as the locations of Union sharpshooters, batteries, hospitals, breastworks, garrisons, churches, and cemeteries. The Seaboard & Roanoke and Petersburg & Norfolk Railroads are also identified. Belonged to George William Gragg, a private with Company K, 6th Massachusetts Infantry, son of William Francis Gragg, also a Civil War veteran with a storied naval career. The map was purchased from John H. Keith nine days after the Siege of Suffolk was raised, as inscribed on the back (“John H. Keith, Co. C 6th Mass Regt. / Suffolk VA. 1863 / Bought by G.W. Gragg of him / May 13, 1863 for 37 cts”).

The patriarch of the Gragg Family, William Francis (1810-1864), served two stints in the US Navy. He enlisted in 1857 and was aboard the USS Mississippi for its landmark voyages to China and Japan, 1857-1860. During this time, Gragg witnessed important events including assaults on Chinese forts by the British and French navies during the Second Opium War and the installation of the first US Minister to Japan. His naval career continued during the Civil War, during which he served as a surgeon’s steward aboard the USS Ohio, Housatonic, Canandaigua, and Circassian, transporting supplies to Union troops and conveying wounded soldiers to hospitals. Gragg’s sons George (1832-1903) and William F., Jr. (“Billy”) (1834-1920) also enlisted and served in the Navy, though George had first mustered into the 6th Massachusetts Infantry with a nine-month term of service. This regiment was stationed in Suffolk, Virginia from September 1862 until June 1863, attached to the 7th Army Corps, Department of Virginia. Expeditions, skirmishes, and battles throughout the winter culminated in the Siege of Suffolk, April-May 1863. Following the raise of the siege on May 4, the regiment saw action a final time at Holland House (Carrsville), before mustering out in June.

On February 1, 1863, George writes to his mother, Maria, from his camp at Suffolk. He mentions a recent expedition across the Blackwater River, and then describes the harrowing Battle of Deserted House, which took place just two days earlier: “We left camp Friday night at 12 o’clock with a part of the Cavalry Regiment and a number of pieces of Artillery We had gone about 6 miles when we were atacted [sic] with some muskets shot from the Reb Pickets. Our Cavalry charged upon them and chased them back. . . Our regiment had gone about 2 miles. . . to where a great mud puddle crossed the road when bang! went one of our Artillery guns and then the battle commenced. . . we had 12 pieces of Artillery at work at once and the Rebs 16, and for about 3 hours from 4 in the morn till near 7. . . the shot flew thick and fast, cutting of[f] trees as large as the apple tree by your shed." Once the fighting concluded, he recounts that he and a comrade “went to help the [the] wounded to the hospital, being stationed about a quarter of a mile back. I cannot describe all that I saw. . . fellows that were torn to pieces awfully, arms of[f], legs of[f], and some with their insides out. I hope I shall never see such a sight again.”

After the siege, George wrote a letter to his wife, Lizzie, and a receipt of sorts for this letter is included in the lot, placing George at Carrsville, Virginia on May 16, 1863, immediately following the Battle of Holland House. The purported cartographer John Keith, who had worked as a civil engineer prior to his enlistment, sold the hand-drawn map to George just before the engagement began. Keith sustained injuries in the battle and died of his wounds on May 16. George returned to Massachusetts upon the expiration of his term of service, only to re-enlist in the Navy in 1864.

This lot also includes three of George’s letters written aboard the USS Circassian, his discharge papers, and five letters written by William Francis Gragg, 1853-1863, including mention of his work as an anonymous naval correspondent for the The Herald.