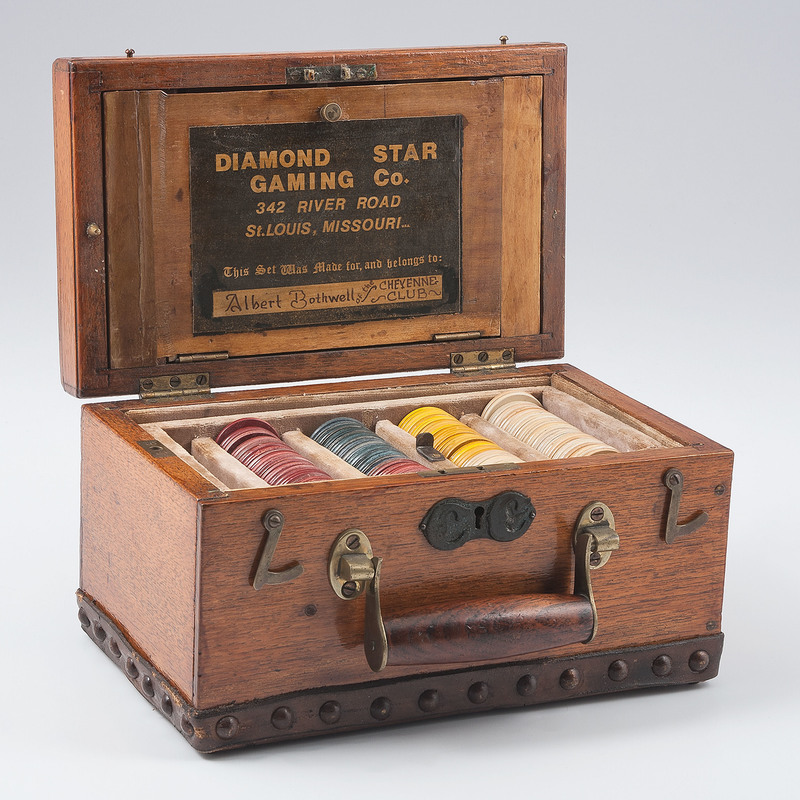 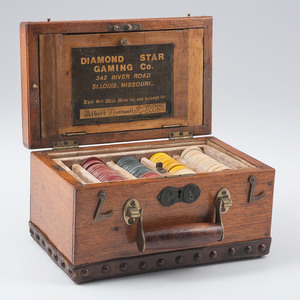 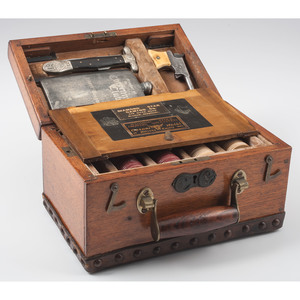 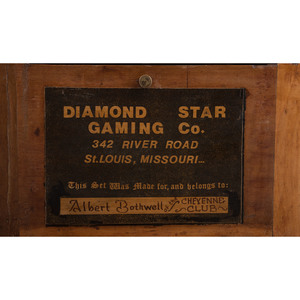 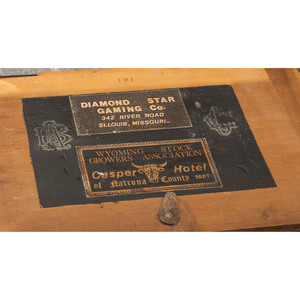 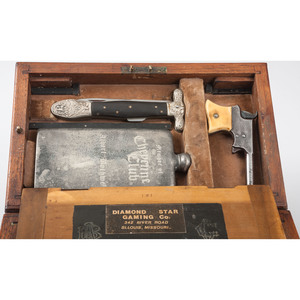 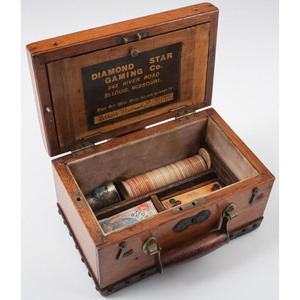 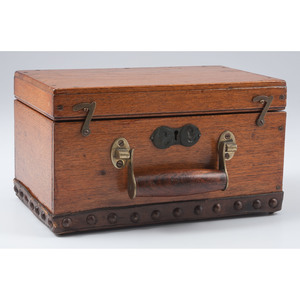 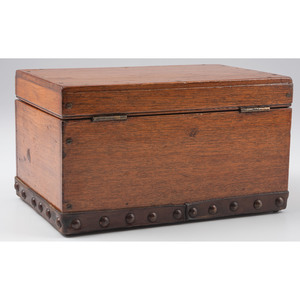 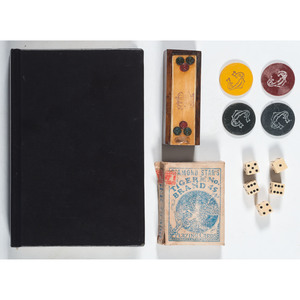 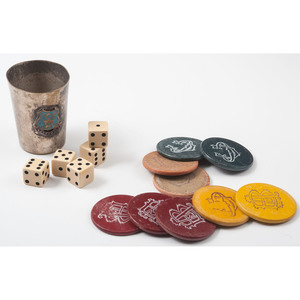 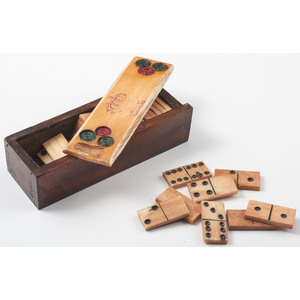 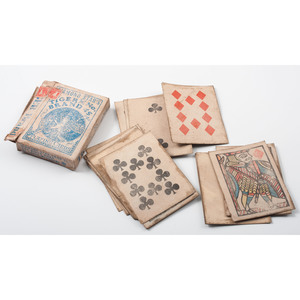 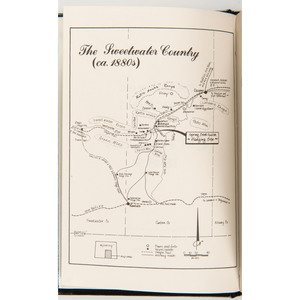 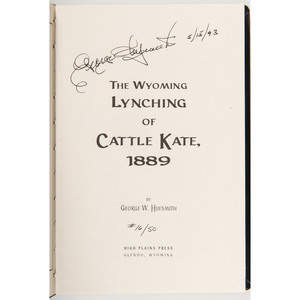 Oak box, 6.75 x 11 x 6.25 in. Oak handle on brass frame. Closures made like "7's"; leather band around bottom with brass studs. Made by the Diamond Star Gaming Co. of St. Louis, Missouri. "This set was Made for, and belongs to: Albert Bothwell of the Cheyenne Club."

The lid contains a pocket knife with ebony handle with silver fittings. Top is "T" shaped with "Liberty and Union" across the top of the "T." Silver-plated hip flask with etched "Member Cheyenne Club Albert Bothwell." Label on inside of lid with "Wyoming Stock Growers Association Casper Hotel of Natrona County 1887." Plus single-shot vest-pocket pistol with Remington's patent date of Oct. 1 1861.

In the main portion of the box is a till with four rows of chips (red, blue, yellow, ivory) and five dice. The chips have intertwined "AB" on one side and "CC" on the other. Below are more chips, silver-plated dice cup or shot glass, set of miniature dominoes (0.5 x 1.0 in.) in their own wood box with "AB" on top, and a deck of 52 pharo/faro cards by Diamond Star.

Accompanied by 1st edition book written about ”Cattle Kate” with photos of Bothwell, his dogs, the hanging tree etc; Town map of 1880 Cheyenne, Wyoming, which placed the Cheyenne club at 17th and Warren. Inside the box is a copy of an 1882 map of Cheyenne with an insert of the Cheyenne Club (from LOC Map Division) and names of over 60 businesses (saloons, attorneys, grocers, tobacconists, banks, restaurants, butchers, etc.).

After the Civil War, as the native peoples were being removed from the land, people of the East, starved for land and opportunities, began moving west to get a fresh start on 160 acres of homestead lands. The first men out on the Plains not only had a head start building large herds of cattle, but they also got together and made the rules. For example, any unbranded cattle became their property. But they also controlled the approval of brands, which had to be registered (and registration was expensive). Thus there are tales of small farmers applying for brand registration being turned down over and over, while the cattle barons then claimed their unbranded mavericks. Then the small farmers/homesteaders would be accused of rustling if they had unmarked cattle. This was only one of many issues that led to several range wars, such as the Johnson County War, over the later quarter of the 19th century.

Jim Averell (James Averell, 1851-1889) and Ella Watson (Ellen Liddy Watson, 1861-1889) were just two of many small farmers claiming homesteads near Cheyenne City. Albert John Bothwell (1855-1928) was one of those cattle barons who lived within the boundaries of said city. The cattlemen had also established the right to graze their herds on unclaimed land. Bothwell in reality did not own much land - he just used public lands. He had even (illegally) fenced some of that land off with barbed wire. When Averell and Watson claimed land that Albert Bothwell had been using, they ran afoul of one of the most powerful of the cattlemen. Bothwell tried to buy them out, harass them, scare them off, and he had his friends at the newspaper publish false stories assailing their character (implying that both were cattle rustlers and Ella was a prostitute). When none of these tactics worked, Bothwell along with five of his buddies, in broad daylight, took Averell and Watson out of their house, took them to Sand Creek Gulch and lynched them. A couple of men, including Averell's foreman, followed the party and tried to intervene, but were outnumbered. By the time the Sheriff arrived, Averell and Watson were dead. Although the lawmen arrested the six cattlemen, they were never convicted because the witnesses who saw these events all disappeared under mysterious circumstances. Bothwell took over the lands claimed and improved by Averell and Watson. The newspaper accounts that followed this double-lynching - the only time a woman has ever been executed in the state of Wyoming - all implied that this was justice served a pair of criminals. Investigations since have indicated that there was hardly any truth at all in the reports. Averell and Watson were simple farmers, setting up homesteads and trying to improve their lots in life. And Albert Bothwell will forever be linked to this sordid affair.

Cards seem to have gotten damp at some point.