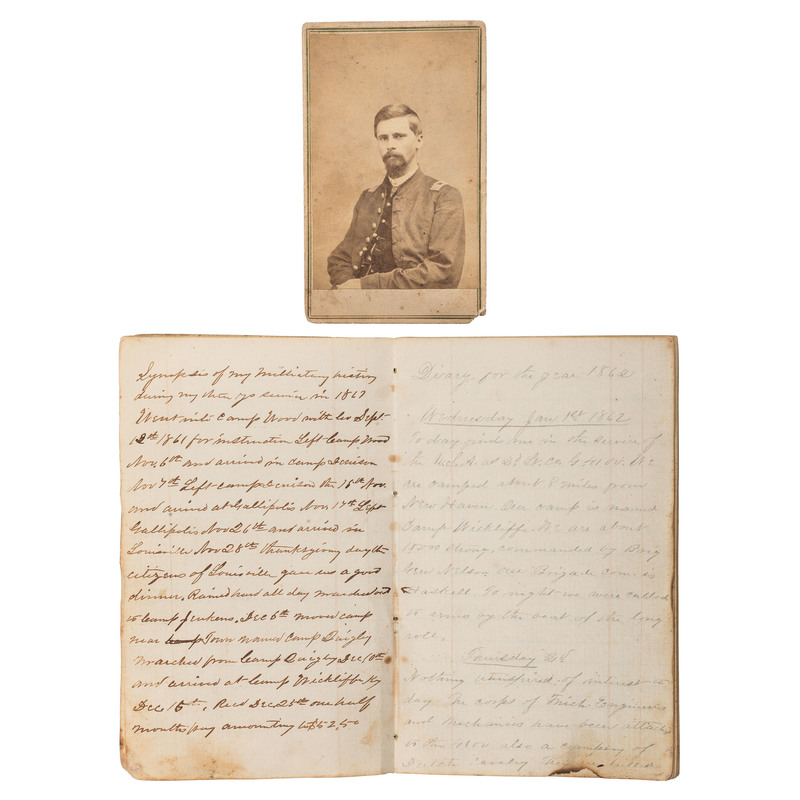 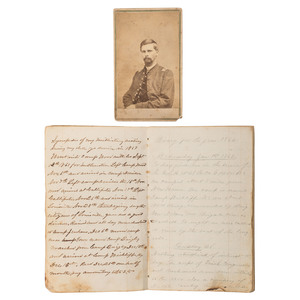 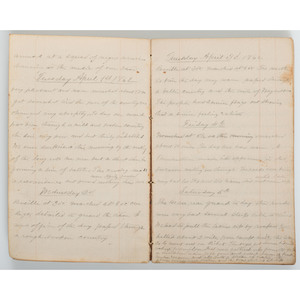 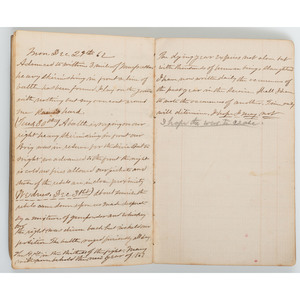 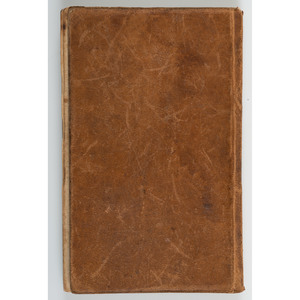 Leather pocket diary of 1st Lieutenant Horatio P. Kile, approx. 3.75 x 6 in., 96 pp. Entries are a mix of pen and ink on blue lined pages and are made daily from January 1, 1862 - December 31, 1862. Excellent content includes descriptions of Shiloh, the Siege of Corinth, the Battle of Perryville, and the Battle of Murfreesboro. Diary accompanied by a CDV identified on verso as Captain H. P. Kile with backmark of photographer A.S. Morse, Department of the Cumberland, Nashville, TN.

Horatio Philander Kile (1839-1924), a resident of Geauga County, entered the service in Co. G of the 41st Ohio Volunteer Infantry as a 2nd lieutenant, on September 10, 1861, for a three year enlistment. The 41st was organized in the Cleveland and Northern Ohio area by West Pointer William Babcock Hazen. Under Hazen's leadership, the 41st developed a reputation as a well-oiled and hard-fighting unit. The 41st took an active part in virtually every important engagement in the Western Theater including Shiloh, the Siege of Corinth, Perryville, Murfreesboro, the Tullahoma Campaign, Chickamauga, and Lookout Mountain. Kile was promoted to 1st lieutenant on January 1, 1862, and became captain of Co. H on March 24, 1863. He was wounded at Missionary Ridge on November 25, 1863, and was mustered out of the army on November 10, 1864 at Pulaski, TN.

The diary opens on January 1, 1862: "Today finds me in the service of the U. S. A as 2d Lt. Co. G 41 OV. We are camped about 8 miles from New Haven. Our camp is named Camp Wickliffe. We are about 15,000 strong...." The first few months of 1862 are relatively quiet for Kile as he and his regiment drill in preparation for the inevitable engagements to follow. Kile notes on January 28 his promotion to 1st lieutenant assigned to Co. G., then in the following weeks describes the regiment's difficult journey through Kentucky towards Nashville. Kile is descriptive, noting the impressive sight of Fort Donelson, the towns he passed through along the way, and the conditions they faced. Finally, on February 25, 1862, their initial destination is reached: "This morning finds us in sight of Nashville. No show of resistance. We marched triumphantly through the streets The band playing 'Yankee Doodle' 'Star Spangled Banner" and Dixie Ending Dixie with our flag is then marched outside town and halted on a hill...."

After continuing their journey south through Franklin and Columbia, the 41st engages in its first major engagement at the Battle of Shiloh. Kile did not participate in the battle as Company G was detailed to stay back from the front on guard duty. Writing on Monday, April 7, as the Battle of Shiloh waged on, Kile notes that "Cannonading commenced early. The wounded are coming in by hundreds...Squads of secesh prisoners came in today, many of our men are dieing of wounds I saw their boddies piled into a waggon one upon another and taken to their graves, without a friend knowing their resting place." Losses to the 41st were significant at Shiloh, with Kile noting on April 8th that "The 41 is badly cut to pieces...."

Shiloh was just the beginning of a string of major engagements in the Western Theater in which the 41st would participate over the course of the next three years. Kile provides excellent descriptions of his regiment's activity during the Siege of Corinth, and of the evacuation of the Confederates. He writes on Thursday, May 29th, "...This evening is heard very plain the cheers of the rebels as the cars arrive. They have probably recd reinforcements. The cars run very busyly to night a large fire was seen at Corinth to night." The actual cause of the raucous makes itself plain the following day - "the cause of the unusual noise in Corinth last night was occasioned by the evacuation about 7 o'c' we commenced march toward C. arrived inside their fortifications without a show of resistance and barrels of sugar & molasses flour & c. were all piled up undoubtedly to burn but they did not have time...."

Following Corinth the 41st continues to pursue rebel forces before a rest in Alabama. By August the troops were on the move again and headed back to Kentucky. Regular skirmishes are described including near Perryville, KY. The diary closes in December 1862 with Kile's poignant reflection on the devastating Battle of Murfreesboro (Stone's River): "(Wednes. Dec 31st) About sunrise the rebels came down upon us made desperate by a mixture of gunpowder and whiskey On the right was driven back but we held our position The battle waged furiously all day The 41st in the thick of the fight. Many will never behold the new year of 1863. The dying year expires not alone but with thousands of human beings slaughtered. I have now written daily the occurences of the past year in the service. Shall I have to note the occurrence of another. Time only will determine. I hope I may not. I hope the war to cease."

Overall, a nicely detailed diary. Kile does not simply detail soldiers on duty and engaged in battle, he reminds the reader of the humanity of the soldiers and the exorbitant cost of war. Note that while the diary has no period identification attributing it to Horatio P. Kile, all locations, details of service, and the rank match with Kile's service in the Ohio 41st. Additional research also identified a typed transcription of the diary belonging to descendants of Captain Kile which matches the first page of the diary offered here.

CDV shows Kile wearing his officer's coat with Captain's bars, dating the photo to post March 24, 1863, when he was commissioned to the rank of captain.

Diary is in good condition given age. Three pages have been removed from the front of the diary, however, the entries for the year 1862 begin after these removals. The CDV has expected toning and soil and a minor loss on bottom right corner.