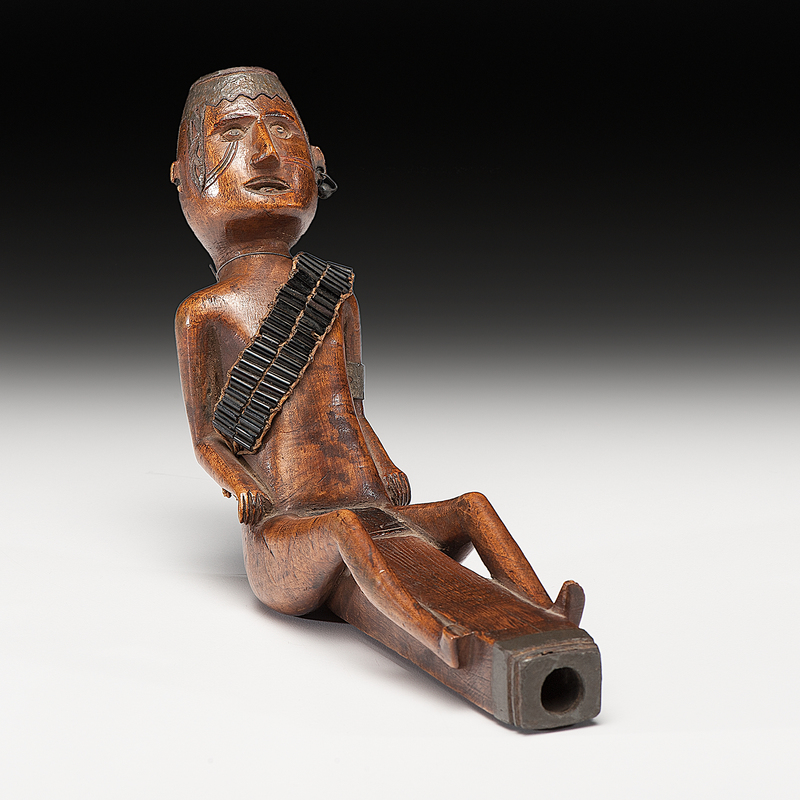 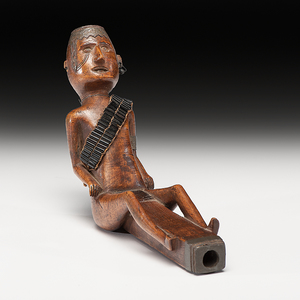 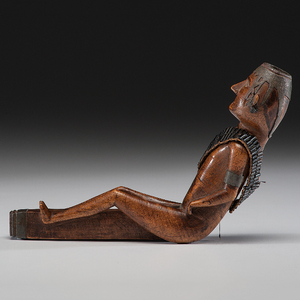 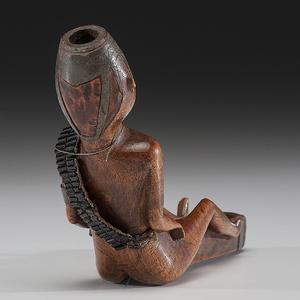 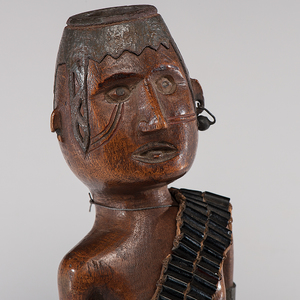 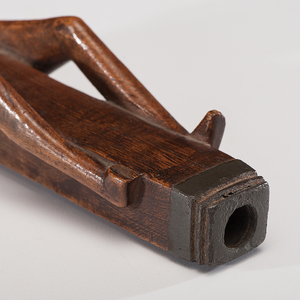 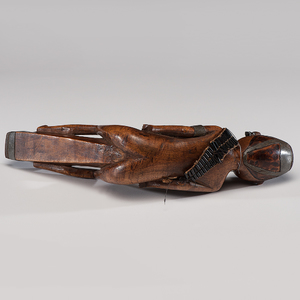 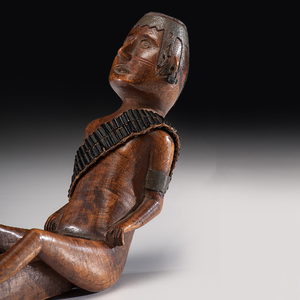 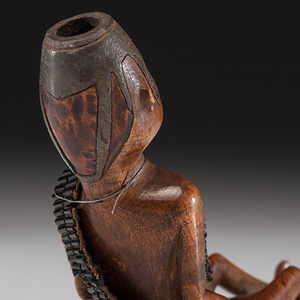 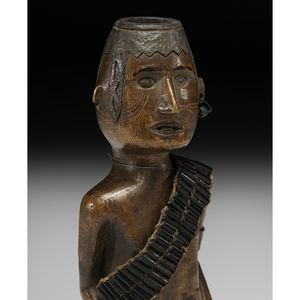 In most regions of North America the smoking of tobacco was practiced by Native Americans primarily as an offering to supernatural beings to pray for their blessing. Pipes served as the major instrument used for this purpose and were the subject of intricate symbolism. In the Eastern Woodlands, one-piece pipes made of clay, stone, or wood were mainly used in personal rituals, whereas composite pipes consisting of a long and often decorated wooden stem and a separate bowl of stone or wood were also employed in collective rituals. Stems and Bowls, the latter sometimes carved to represent human faces or figures, animals, or artifacts were not necessarily made by the same person, and both played an important role in gift exchanges and trade with other indigenous groups as well as with Euro-Americans.

This exquisitely carved and decorated pipe bowl depicts a nearly naked man sitting, his torso reclining, his hands resting on his hips, and his legs extended with slightly flexed knees. His slightly opened mouth shows the tip of his tongue and may indicate the act of speaking or singing. The pupils of the eyes are inset and filled with black pigment. Face painting is marked by engraved parallel lines filled with pigment (two red horizontal lines on the left cheek, two red lines enclosing a black one running diagonally from below the eye across the cheek on the right). His ears are pierced and held a globular ornament suspended on wire (the right ear was broken off in the distant past). The left arm features a broad arm band of lead; the former presence of such a band on the right arms is indicated by a discoloration of the wood above the elbow.  Part of the head is covered with slightly corrugated lead inlay extending outward from the interior lining of the bowl, which opens at the top of the skull. Since the man’s hair is represented by burn marks on the back of the head (as are the eyebrows), the lead inlay probably indicates a headdress. A sash of two rows of glass imitation wampum strung on sinew and woven on a warp of three plant fiber strings (probably Apocynum sp.) is worn over the left shoulder, runs across the chest and passes under the right elbow to the back, where the ends of the sash are tied together. The man’s genitals are covered with a rectangular lead inlay, probably representing a breechcloth or apron, but no belt is indicated, and the buttocks are bare. The end of the shaft, where the pipestem was inserted, is covered with a simple band of lead inlay.

The unsustainable backward inclination of the torso and the open mouth convey a sense of action that is absent from nearly all other examples of effigy pipe bowls from the Eastern Woodlands of the historic period.

The pipe bowl has no documented history beyond the approximately fifty years during which it had been in the possession of its previous owner, Clemens Caldwell (1918–2007), but it can safely be dated to the last quarter of the eighteenth century, when glass imitation wampum was especially popular for the manufacture of belts, pouches, and pouch straps. The designation of the object as “Tecumseh’s pipe” may be fanciful, but it may have been associated with the pipe before it came into the possession of Clemens Caldwell. It suggests a more or less local origin south of the Great Lakes and may at least contain a hidden grain of truth.

In eastern North America, wooden pipe bowls were made from southern New England throughout the Great Lakes region to Minnesota, but only relatively few specimens (less than one percent of the number of those made of stone), collected between the seventeenth and twentieth century, have survived. Most of them are without documented date and place of origin. Exceptions include specimens collected on the mid-Atlantic coast or its hinterland in the seventeenth century, the Delaware of Pennsylvania and the Mississauga of southeastern Ontario of the eighteenth century, and the Ottawa of Michigan and the southwestern Ojibwa of Wisconsin and Minnesota of the nineteenth century. Other have been attributed, with varying degrees of likelihood, to the Iroquois, Wyandot, Anishnaabe, Santee, Creek, and Cherokee. Despite this unsatisfactory documentary situation, it is useful to compare the Caldwell pipe to other wooden and stone pipe bowls in search of clues for its origin.

The closest affinity among wooden pipes is shown by an undocumented bowl featuring a man’s head from the Steven Michaan collection, attributed to the “Great Lakes, ca. 1760.”[1] In addition to similarities in the rendering of the nose, eyes, and ears, the Michaan pipe shows a strikingly similar treatment of the lead inlays above the face, including a similar state of corrosion of the lead. The similarities are close enough to suggest the two pieces were made by same maker. There are only three other known examples of somewhat simpler lead inlays above the face extending to the back of the head: two of them are found on a pair of closely related wooden pipes in an otherwise different style, dating to around 1800 and attributed to the “Anishnaabe,”[2] and a catlinite pipe collected in 1836 from the southwestern Chippewa of La Pointe, Wisconsin.[3] The two “Anishnaabe” pipes are also among the few to feature ear ornaments (wire-wrapped slit ear lobes), otherwise found only on a catlinite pipe attributed to the Santee, in this case resembling those of the Caldwell pipe.[4]

A nearly identical, although much smaller version of the Caldwell pipe in black stone, is preserved in the British Museum, which acquired it in 1949 from the prominent dealer William Oldman, and which has since been attributed to the “Wyandot, 19th century.”[5] The Wyandot attribution may have been due to the fact that in this version the reclining figure is holding a barrel and a glass on his lap and that other depictions related to the use of alcohol had been assigned to the Wyandot (although they clearly are found all over eastern North America). Except for this additional feature, the British Museum pipe is strikingly similar to the Caldwell pipe: rectangular shaft, reclining trunk, flexed knees, open mouth, incised representation of a sash running across the chest, horizontal incisions on the face to indicate painting. The British museum pipe also features a belt and leggings, missing on the Caldwell pipe, the ears of differently shaped, and the elaborate decorative features above the head are absent. The similarities and differences suggest that the two pipes were made by different makers, but that they referred to a shared underlying narrative.

Depictions of alcohol use on effigy pipes and wooden ladles has often been interpreted as social commentary on pervasive feature of culture contact that had become part of the set of stereotypes associated with Native Americans. There is, however, ample evidence, especially also from northeastern North America, that inebriation was often considered as a method to reach an altered state of consciousness analogous to the one sought in the vision quest. The Caldwell pipe and the British Museum pipe may thus be interpreted as images of a man engaged in a spiritual encounter—with or without the use of liquor.

Two other features of the iconography of the Caldwell pipe merit further consideration. Single bands of wampum or imitation wampum were generally not worn as sashes in the manner shown here, but served as straps of rectangular pouches. It is at least possible that a pouch was originally here attached as well, especially since black commercial thread has later been used to hold the ends of the imitation wampum band together, which would have become loose after the less of the pouch.

More puzzling are the lead inlays on the head. They are probably not representations of hair, which is indicated by burn marks, but of a headdress, whose appendages were hanging over the cheeks and the back of the head. Of the headdresses known to have been worn in the Central Ohio Valley region around 1800, the one that is the most likely candidate is the cloth turban, adopted primarily by the Shawnee during their prolonged sojourn among the Creek.[6] The most extensive source of information on dress and ornament of both the Shawnee and Creek in the early nineteenth century is provided by the lithographs after paintings by Charles Bird in Thomas McKenney and James Hall’s History of the Indian Tribes of North America (1838–1844). They illustrate, especially for the Creeks, turbans with appendages hanging over the ears, and both for the Creeks and Shawnees face paintings consisting of horizontal and/or diagonal red and black or blue lines. While offering no proof for a Shawnee origin of the Caldwell pipe, they at least suggest the possibility to explain the assumed association of the pipe with the Shawnee leader of the early nineteenth century in the absence of any extant examples of Shawnee wood or stone carving.

[6]     Charles Bird King in Thomas L. McKenney and James Hall, History of the Indian Tribes of North America, with Biographical Sketches and Anecdotes of the Principal Chiefs (3 vols., Philadelphia, PA: 1838–1844).