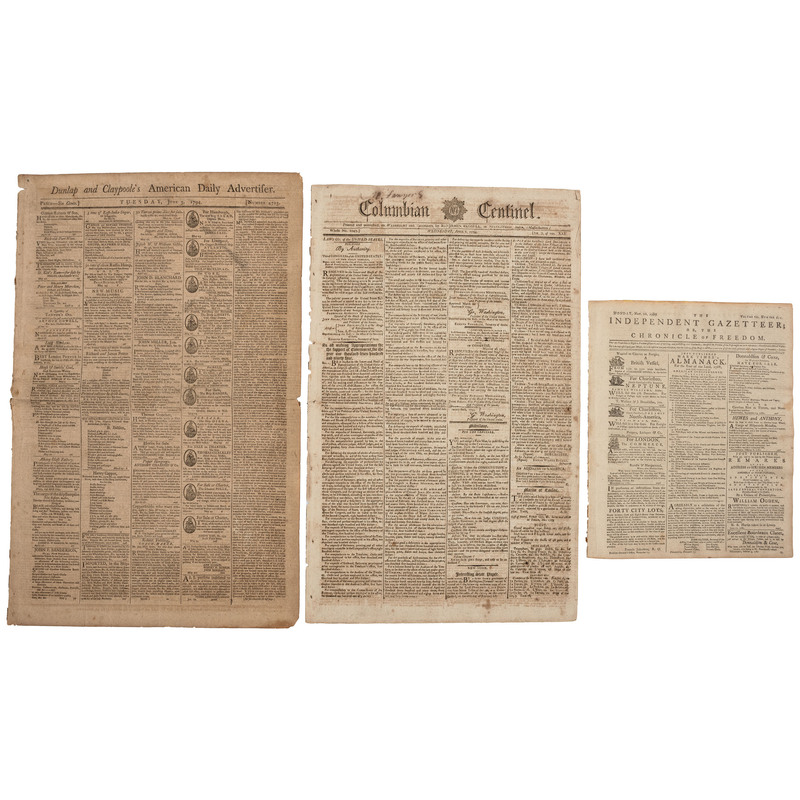 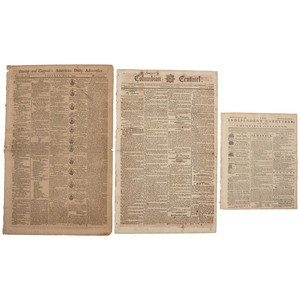 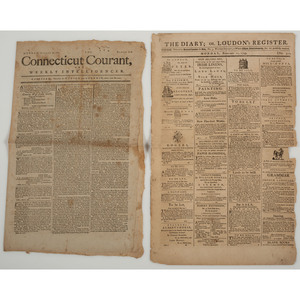 [18th CENTURY IMPRINTS]. A group of 5 newspapers with reports on politics and Native American affairs, 1787-1794, comprising:

The Connecticut Courant, and Weekly Intelligencer. Number 1171. Hartford, CT: Hudson and Goodwin, 20 August 1787. 4pp, folio, 10 7/8 x 17 1/4 in. Meeting of the Constitutional Convention in Philadelphia: "the eyes of the whole continent are now cast on that respectable body, the convention. The heart of every American, good or bad, must be interested in the results of their deliberations. It will either form a glorious epoch in the history of America, or by doing nothing, leave the disease to the violent remedy procuring itself." With additional commentary from New York that "some...interested politicians have expressed apprehensions that the federal government will not be adopted by the states or the people." Reporting on General Sir Henry Clinton's 1779 campaign to retake Stony POint on the Hudon: "The Americans had finished a small but strong work on the opposite side of the river, which they called Fort Lafayette...General Pattison...overcame the difficulties of dragging heavy artillery from a very bad landing place to the top of the hill...the garrison seeing that all possibility of escape was cut off, & that their fire was totally overpowered...surrendered their little fortress on the following morning...The boldness of their defense certainly merited some praise." Also with reporting on the Attack on New Haven and the destruction of rebel property: "They captured New Haven without any great loss...the usurpers had possessively placed their hopes of severing the Empire, and avoiding decisive actions, upon the wast of the British treasure, and the escape of their own property."

The Independent Gazetteer; or, the Chronicle of Freedom. Vol. VII, Number 611. Philadelphia: Eleazer Oswold, 26 November 1787. 2pp., 4to, 9 1/4 x 11 5/16 in.  A lengthy essay on the advantages of the new constitution: "Under the old Confederation, the people at large had no voice in the election of their rulers. The collected wisdom of the state legislatures will hereafter be exercised in the choice of the senate, but our federal representatives will be chosen by the votes of the people themselves." Letter from New Brunswick supporting the new Constitution, North Carolina's section of delegates for the state convention, and news of Indian affairs: "Col. Joseph Brant, this celebrated Indian partisan, had a great counsel at Niagara, consisting of some of the principal chiefs of the six nations...shortly after the council broke up, Col. Brandt sent out for Detroit via Lake Erie...he was heard to say that the Long Knife (meaning the Virginians) were very troublesome and paid little regard to treaties, that he would now pay them a visit and could treat with them upon a part of being accompanied by the tomahawk, as Long Knife always by his bayonet, and if they were from peace, they should have it; but if for war, they should find that were accompanied him also."

The Diary; Or, Loudon's Register. Number 311. New York: Samuel Loudon & Son, 11 February 1793. 2pp., folio, 11 5/8 x 18 1/2 in. Reporting that the Senate passed a "resolution for a joint committee to count the ballots returned by the executives of the several states, for the president and vice president of the United States." Also includes a bill for the "compensation for the president and vice president." The War Department updates information for veterans' pensions and a lengthy section with news of the French Revolution and the confinement of King Louis XVI.

Dunlap and Claypoole's American Daily Advertiser. Number 4725. Philadelphia: John Dunlap and David C. Claypool, 3 June 1794. 4pp., folio, 12 1/2 x 19 5/8 in. Reporting on Indian affairs at Presque Isle, news from Georgia about "a party of Indians (supposed to be Cherokees or Upper Creeks)" who stole horses, and text of letters exchanged between Secretary of State Thomas Jefferson and Kentucky Governor Isaac Shelby regarding provocation of Spain.

Columbian Centinel . Vol. XXI, Number 7, Whole Number 1047. Boston: Benjamin Russell, 2 April 1794. 4pp., folio, 11 7/8 x 19 in. News that President Washington signed the 1794 federal budget with front-page text regarding government appropriations acts. Also an announcement of an embargo on all shipping, a proposed amendment to the constitution, degradation of Brigish privateers against American shipping in the West Indies, and some news of Indian Affairs including a letter from Lord Dorchester, Governor of the British Province of Quebec to the Seven Nations.

Together, 5 newspapers. Disbound, toned, occasional spotting, some chipping to edges.