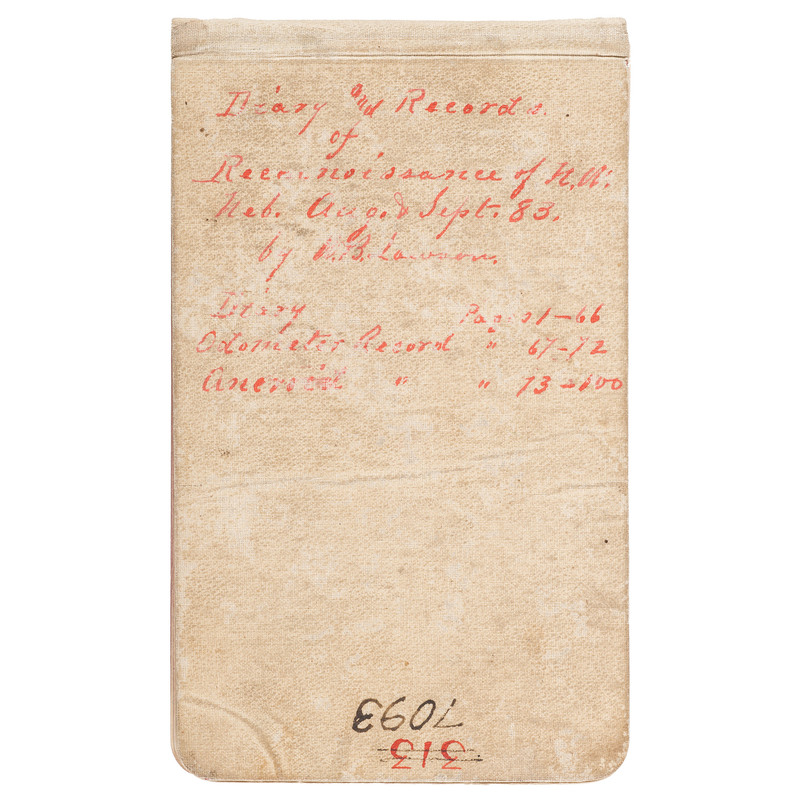 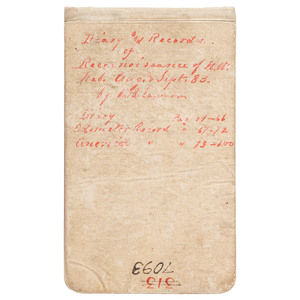 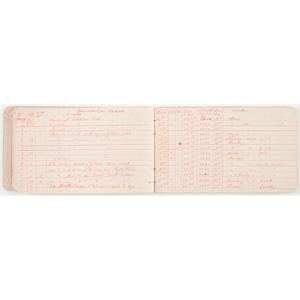 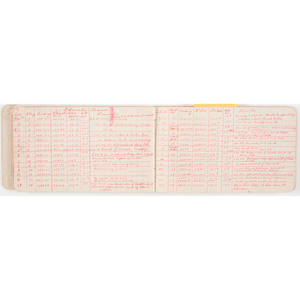 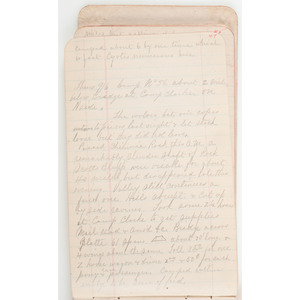 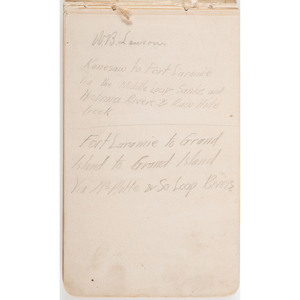 1883 Surveyor's Diary of William B. Lawson, Engineer for the Chicago, Burlington, & Quincy Railroad

Diary of surveyor William Bateman Lawson (1846-1901), dated 1883, with details of a survey expedition through western Nebraska for the Chicago, Burlington & Quincy Railroad, 100pp, approx. 4.25 x 6.75 in. Handwritten title on front cover reads "Diary and Records of Reconnaissance of N. W. Neb. August & Sept. 83. by W. B. Lawson." The diary includes an odometer record for his journey as well as aneroid barometer readings.

William B. Lawson was a lifelong railroad man who was eulogized upon his death as possessing "an enviable reputation for accuracy that rendered him one of the best known engineers of the West" (Rocky Mountain News, Denver, January 28, 1901). Born and educated in Illinois, in 1867 Lawson entered the employ of the Chicago, Burlington, & Quincy Railroad as a rodman. In the ensuing years Lawson's career advanced rapidly keeping pace with the explosive growth of the railroad industry. "The Burlington," as the Chicago, Burlington, & Quincy Railroad came to be known, would come to serve a wide area with extensive trackage in both the Midwest and Rocky Mountain regions. Lawson's diary reflects The Burlington's planned expansion westward through Nebraska and further into Colorado and Wyoming. The route explored is described by Lawson as "Kenesaw to Fort Laramie via the Middle Loup - Sanke and Niobrara Rivers & Raw Hide Creek / Fort Laramie to Grand Island to Grand Island [sic] Via No. Platte & So. Loup Rivers." This route would take him through the northwest portion of the state to Fort Robinson, and then across the Wyoming border and down to Fort Laramie, then east again towards central Nebraska.

The diary commences with a list of items purchased at Lowell, NE, and a guide for computing the height of mountains, then proceeds with its first entry on 7/27/1883. Lawson writes on 7/28 that he placed the odometer on his wagon and marks the entry with "Camp No. 1." The dates and camp numbers specified throughout the diary are significant as they correlate directly to two tables at the end of the diary which record the odometer record and the aneroid barometer readings. Included in these detailed tables are general remarks as well as specifics regarding locality, weather, elevation, and more.

Lawson's daily diary entries reflect the standard observations expected from a surveyor including descriptions of land surface, soil, water features, wildlife, and man-made improvements such as ranches, roads and trails. Typical of his style is this entry from Monday, September 23: "Camp No 33 about 21 miles below Ft Laramie. near point of White bluffs. / Got started about 7:30 our time 6:40 by sun about. Stopped at Post and got some feed, Laramie has more and better buildings than Robinson some large concrete buildings Brick Barracks & wooden houses. came down the Platte on south side. The first 2 or 3 miles heavy with sand afterwards Roads fine the most of the way. Valley irregular in width and quality, but a mile or more wide generally, and a good deal of very fair and some excellent land. Hills high and gravely...got dinner at Chamberlain & Doty's Ranch 9 miles out. Some pastures fenced...." Noteworthy is Lawson's description of the historic Camp Clark toll bridge. Overall, an engaging and fascinating narrative portrait of the Nebraskan frontier of 1883.

Good overall condition given wear and age. Some minor soil particularly on cover but also on interior pages. Notebook has separated from spine but cover remains attached. First two pages entirely separated from binding. Mix of pencil and various color inks. Blue lined pages with handwriting that is easily legible.