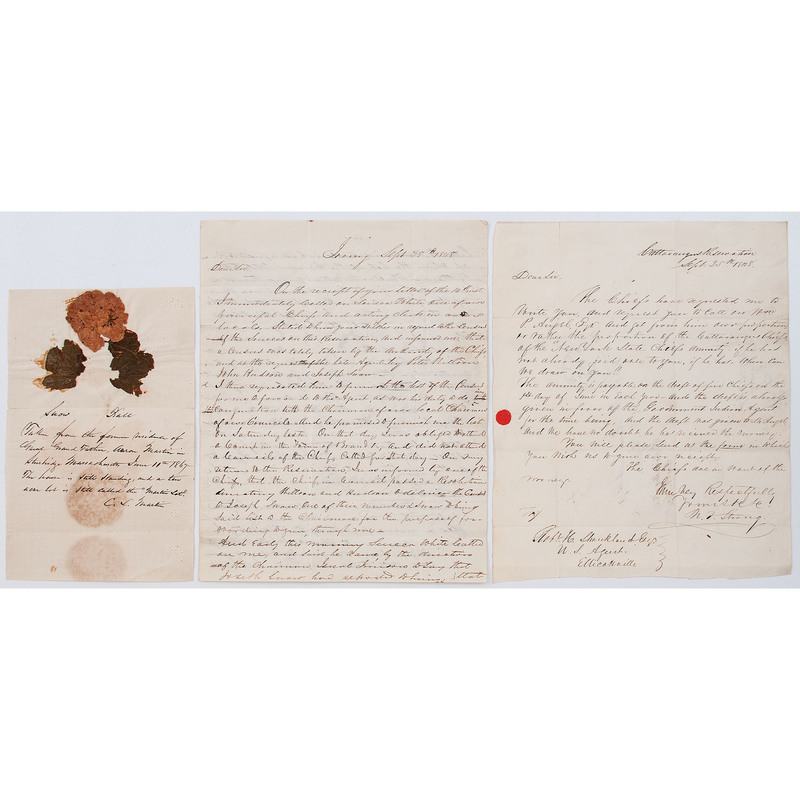 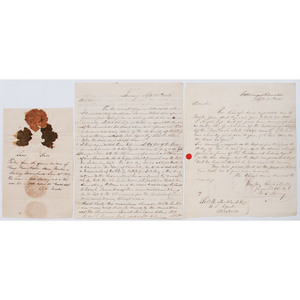 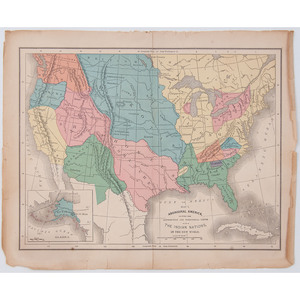 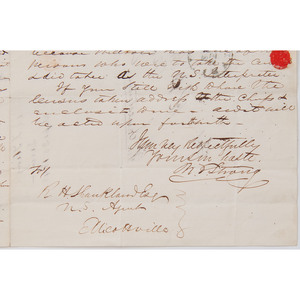 Lot of 4 including two documents signed by Seneca Chief Nathaniel T. Strong, one of which describes tribal tensions and foreshadows the imminent change of tribal leadership known as the "Seneca Revolution."

Strong, Chief Nathaniel Thayer (1810-1872). Hereditary Seneca Chief also known as "Hon-Non-De-Uh." ALS, "N. T. Strong," 3pp, approx. 8 x 10 in., "Irving." September 25, 1848. Addressed to Robert H. Shankland, US Indian Sub-Agent at Ellicottville, NY. Strong writes to Shankland regarding a requested census of Seneca inhabitants on the Cattaraugus Reservation in western New York. Strong had previously written to Shankland stating that there was no census data available, however, in this letter he relates that "a Census was lately taken by the authority of the Chiefs, and at the request of the late Agent by Pete Willson John Hudson and Joseph Snow." The letter continues to explain that Peter Willson and John Hudson refused to turn over the list of the census when it was requested by the Council of Chiefs, an action which drew the ire of the chiefs. Strong then continues, "I have been requested to say to you further, that there is a party which Willson is the adviser, who have endeavored to [?] for the chiefs in their public transactions, and they have succeeded in their wishes to certain extent by the aid & assistance of the late Agent, and that party are of course dissatisfied in Mr. Angel's [previous agent] removal - composed of men, however, that are no articular account at home, and have no voice in our Councils, but unfortunately they have got the list of our Census...." This act of defiance seemingly relates to the chorus of Seneca people who were increasingly distrustful of Council authority, ultimately resulting in the adoption of the Seneca Constitution in December 1848. This new constitution heralded the "Seneca Revolution" and abolished government by tribal chiefs.

A second letter from Chief Strong to Shankland, also dated September 25, 1848, inquires as to whether or not the "proportion of the Cattaraugus Chiefs of the 'New York State Chiefs Annuity'" had been paid to Shankland already. Strong notes that the annuity is overdue and notes 'The Chiefs are in want of the money."

Strong letters accompanied by two items of a later date: pressed flowers with a note indicating the flowers were taken from the estate of Aaron Martin in Sturbridge, MA in 1867; also a 2-page color map entitled "Aboriginal America, Showing the Distribution and Territorial Limits of the Indian Nations, in the New World," likely removed from a late 1870s edition of Western Wilds and the Men Who Redeem Them by J.H. Beadle.

Letters are in good condition with expected wear and toning. Map with increased toning at edge lines as well as curvature and small tears at edges.