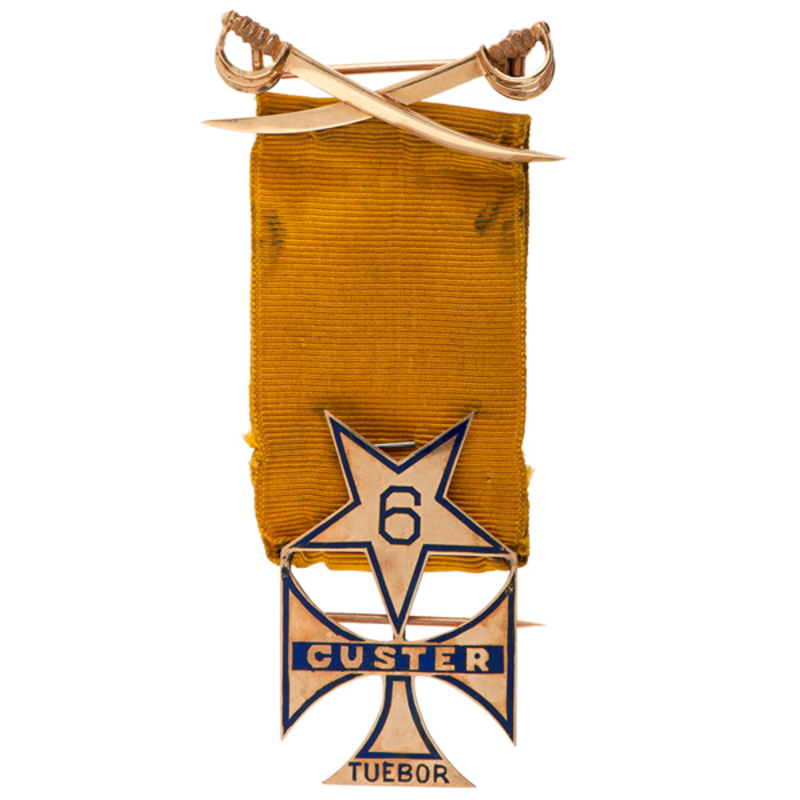 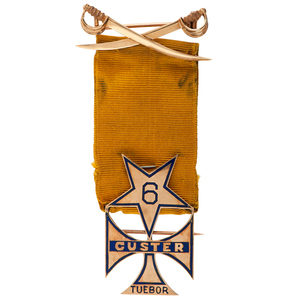 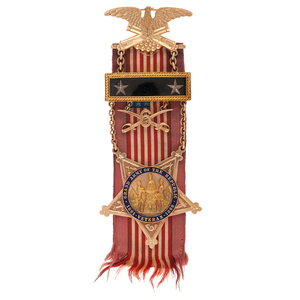 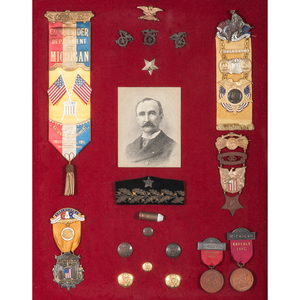 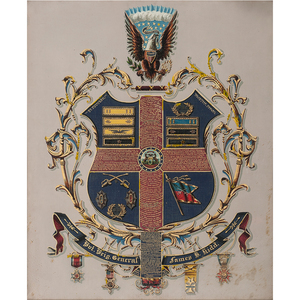 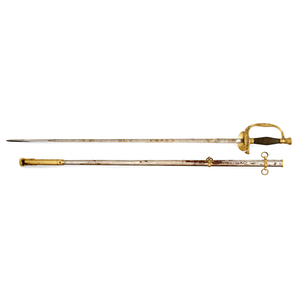 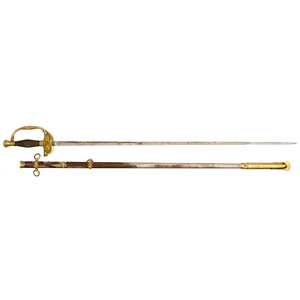 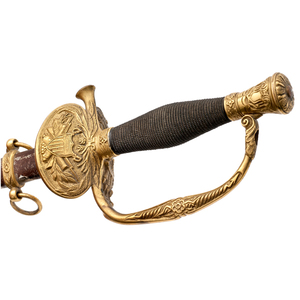 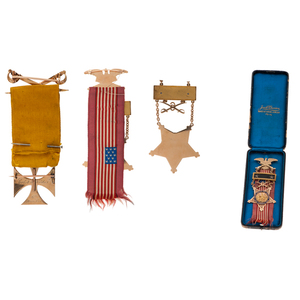 Waiting for the Civil War to begin was â€œpainfulâ€ for 22-year-old University of Michigan sophomore James H. Kidd and his peers. Many of them â€œkept their trunks packed and ready to leave [for the front] at a momentâ€™s notice,â€ wrote Kidd [1]. The evening the Confederate army fired upon Ft. Sumter, an angry mob of students marched towards the Chancellorâ€™s home. Even though the Chancellor appealed for cooler heads, many of the fists shaking in protest soon carried rifles on the battlefield. Kidd was more patient than his peers, however, and waited until the summer of 1862 to join the cavalry as an officer.

Kidd accepted a commission as a Captain on August 28, 1862. A few months later, he mustered into the 6th Michigan Cavalry Company â€œEâ€ under General Joseph D. Copeland. He and his fellow officers assumed a difficult task training men who â€œenlisted from love of country rather than from a love of armsâ€ [2]. General George A. Custer took command in 1863 and had a tailor sew a uniform of black velveteen, with gold lace that extended from his wrist to his elbow, a wide-collared blue sailor shirt with silver stars sewn on and a red necktie around his throat. [3] Custer claimed it was so his men could see him in the field, but newspapers and superior officers viewed it as preening.

Kidd stood by his superior officer, and his exploits on the battlefield earned him several promotions. In May 1863, Kidd received a promotion to Major. Two months later, he was wounded at Falling Waters, Maryland. While recovering from his wounds, his regiment played a pivotal role in in defeating General JEB Stuartâ€™s attempted cavalry thrust at Gettysburg. In the middle of the charge, Custer shouted "Come on, you Wolverines!" which became the rallying cry of the brigade. After their victory, the men idolized Custer. â€œWe swear by him,â€ wrote Kidd of Custer to his father. â€œHis move is our battle cry. He can get twice the fight out of this brigade than any other man can possibly doâ€ [3].Â In May 1864, General Custer recommended Kidd as Colonel. Kidd accepted the position and took command of the 6th in southwestern Virginia.Â  He was wounded again at the Third Battle of Winchester in September, but upon recovery led his unit on a series of raids through the Shenandoah Valley, destroying millions of dollars of Confederate property. On June 15, 1865, he was brevetted Brigadier General for gallant and meritorious serviceÂ and spent the remainder of his military service out West pursuing Sioux and Cheyenne Indians until mustering out at Fort Leavenworth on November 7, 1865.Â  As a veteran, he was very active in the GAR, serving as post commander in his hometown of Ionia and as Commander of the DepartmentÂ of Michigan for a time in the 1890s.

After the disastrous defeat of his beloved commander at Little Big Horn, Kidd refused to believe that Custer had a â€œdeath wishâ€ or that his hubris was to blame. He wrote in his memoir, â€œThe true version of the massacre will remain sealed in a book until the dead are called upon to give up their secretsâ€ [5].

The centerpiece of the collection is Gen. Kiddâ€™s "Custer Valor Medal."Â  The badge was designed by Custer while in the field in 1864 and produced by Tiffany & Co. to his exact specifications (the original sketch resides in the archives of the Little Bighorn Battlefield National Monument in Montana).Â  The young GeneralÂ Custer was the sole arbiter of who should receive the award and had them individually commissioned at his own expense, resulting in slight variations between the handful of known examples.Â  Made of 14kÂ gold and blue enamel, it features a Maltese cross with "Custer"Â across the middle and the Latin motto "Tuebor" at the bottom, the motto of Custer and Kiddâ€™s home state of Michigan meaning â€œI Will Defend.â€ Â Reverse is engraved "Col. J.H. Kidd / 6th Mich. Cav."Â  The top of the Maltese cross morphs into a five-pointed star with a â€œ6â€ representing Kiddâ€™s 6th Michigan Volunteer Cavalry, and is suspended from a gold crossed sabers pinback by a gold cavalry ribbon. Kidd's pride in receiving the award is captured in a letter of appreciation published in the Detroit Advertiser and Tribune on June 17, 1865: â€œThe gold in this badge is not more precious, it is not rarer, than the frankness, the generosity, the want of distrust which has always characterized your intercourse with meâ€¦The associations-Michigan Brigade Cavalry, its leader, Custer, his deeds and theirs are enough to make your gift one of inestimable value alwaysâ€.

Among the other items is GeneralÂ Kiddâ€™s GAR badge, of unusually high quality, made of 14k gold and with two-star, black enamel bar and 6th Cavalry hanger.Â  Made by Jos. K. Davison, Philadelphia, and housed in the original case. Â Also a shadowbox frame, 20.5 x 24.5 in., containing a portrait of GeneralÂ Kidd, various buttons and insignia, and GAR reunion items includingÂ his DepartmentÂ of MichiganÂ Commanderâ€™s ribbon from the 27th National Encampment, Indianapolis, 1893; Delegateâ€™s badges from the 30th National Encampment at St. Paul, 1896, the 35th at Cleveland, 1901, and the 39th at Denver, 1905; and DepartmentÂ of Michigan badges from Buffalo, 1897, and Chicago, 1900.

Complementing the physical medals is an oil on canvas Civil War service escutcheon with hand-painted depictions of the medals and featuring a detailed record of Kiddâ€™s service, including a list of all engagements, attachments, and promotions, the shoulder straps and insignia of his various units and ranks, and the Great Seal of Michigan at center, housed in period frame, 33 x 38 in. overall.Â  Kiddâ€™s medals are at bottom, including the GAR badge and the Custer medal offered as part of this lot, as well as theÂ medal of the Military Order of the Loyal Legion of the United States and the Army of the Potomac.Â Between these is a transcript of a letter written by GeneralÂ Custer to Michigan GovernorÂ Blair, endorsing MajorÂ Kidd for promotion to Colonel of the 6th MichiganÂ Cavalry. Dated June 3, 1864, it reads in part, â€œMichigan cannot boast of a more gallant and efficient officer than Major Kidd, and I am confident that his appointment as Colonel of the 6th would not only produce entire satisfaction in his regiment, but would serve to increase the high but well-earned fame of the Michigan Cavalry Brigade.â€