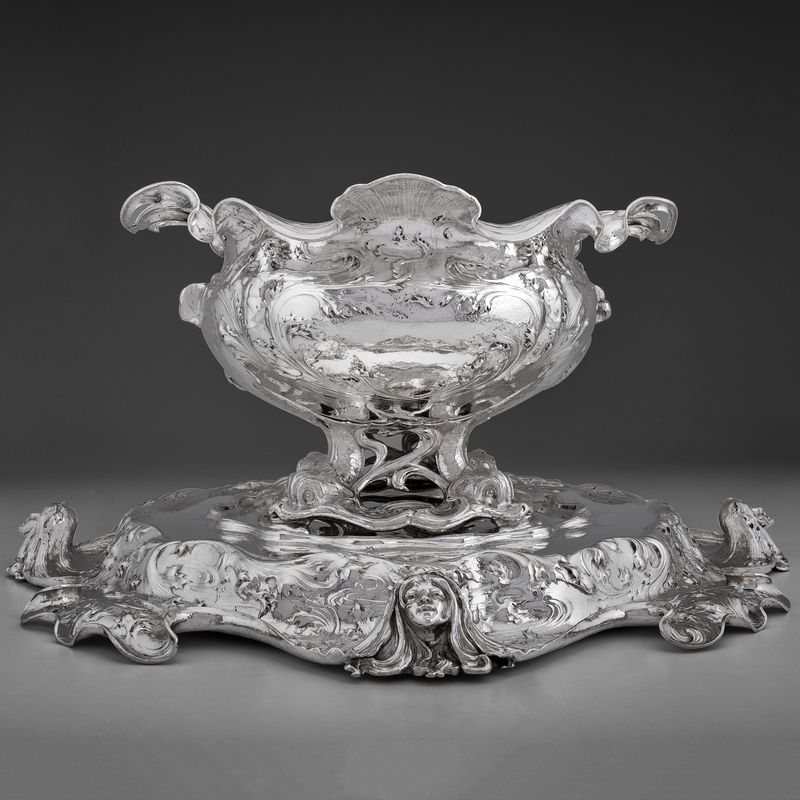 American (Providence, Rhode Island), 1901. An exceptional Gorham Mfg. Co. Martelé punch bowl and plateau with marine decoration, the bowl having a dramatically undulating and scalloped rim over the body decorated with waves, sea plants and mermen blowing conch shells, all supported by a base of four dolphins, set on a matching plateau of rippling form punctuated by cast female heads, both pieces with Gorham marks on base.

Buffed out monogram on front cartouche reading Boston ? / 1902. (Photographs of all marks are available upon request).

The offered bowl and plateau are coded ANN and ANQ and were originally part of a sixteen-piece set which also included two ladles and twelve cups.  The set is pictured in Gorham’s Martele Photobook No. 4 and in Katharine Morrison McClinton, Collecting American 19th Century Silver, illus. p. 109.

While the maker of the set is unknown, both pieces were chased by David Wilmot (1853-1940), one of Gorham’s master chasers. Wilmot was born and trained in London. He was hired by Gorham in 1875 and became a United States citizen in 1881. He was one of the most prolific and accomplished chasers at Gorham, and, for a time, was the highest paid worker, excluding the foreman. With the exception of a four-year hiatus in the 1890s, Wilmot spent his entire career with Gorham, retiring in 1925.

The punch bowl, plateau and accessories were completed September 30, 1901 and at the time were estimated to have a net price of $1560. The pieces were produced as samples, rather than as special orders, and were intended to be sold through an unspecified retailer. The punch bowl required 100 hours to make and 197 hours to chase. The plateau required seventy-five hours to make and 135 hours to chase. Gorham records note the punch bowl capacity at nineteen pints. The four female heads around the base of the plateau were cast from a bronze mold, a rare example of Martelé not created entirely by hand. The design of the cast heads are similar to those on a Martelé plateau (coded ANR) that accompanies a ewer, both modeled by E. Codman and chased by Robert Bain, another Gorham master chaser.

Gorham began its production of the Martelé line in the second half of the 1890s under the direction of chief designer William Christmas Codman (1839-1921). The artistic development of Martelé was both an adoption of the Art Nouveau aesthetic, at the height of its European popularity by the late 1890s, and a conscious effort by Gorham's design team to create silver pieces that went beyond their utility to become art. Codman focused on the development of highly skilled craftsmen who hammered and chased each piece by hand, leading to the line's unique artisanal quality and lending it the name Martelé, coming from the French verb "to hammer." By late 1897, Martelé was being produced using .950 silver, presumably for its increased malleability. This punch bowl and plateau exemplify Gorham’s synthesis of the Art Nouveau aesthetic. They showcase the artistic virtuosity of the designer and craftsmen responsible for its execution.

Cowan’s is grateful to L.J. Pristo, Ph.D. for his assistance on this lot.

An old lacquer finish was removed and pieces are highly polished. Monogram to front cartouche was removed.