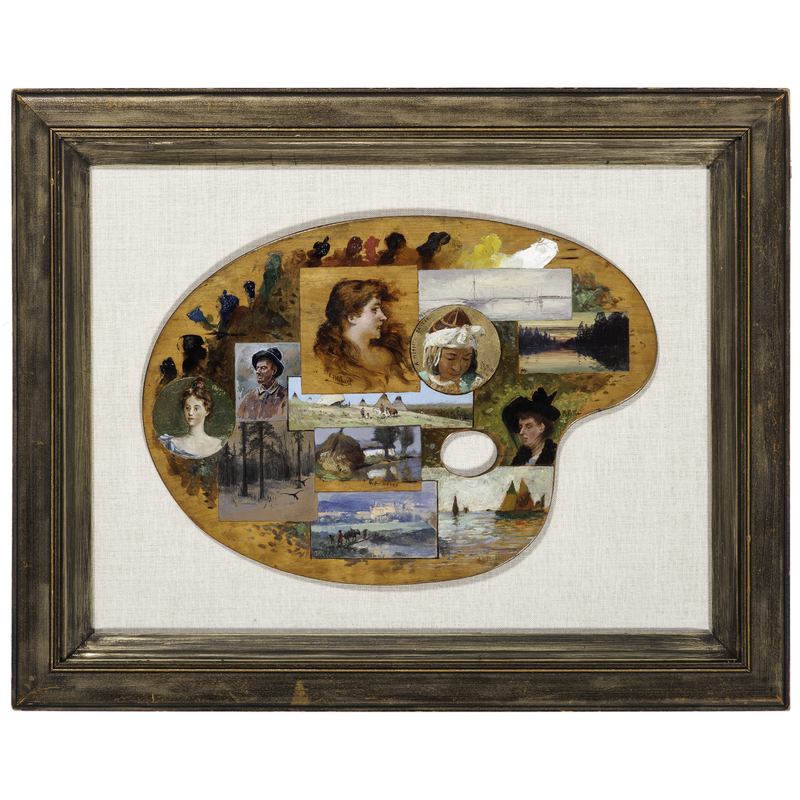 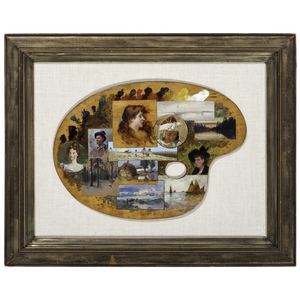 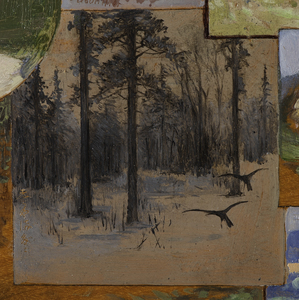 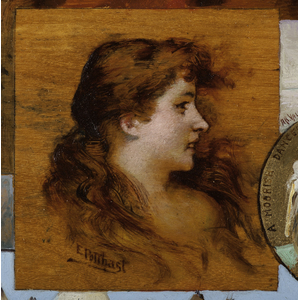 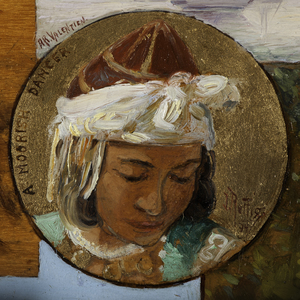 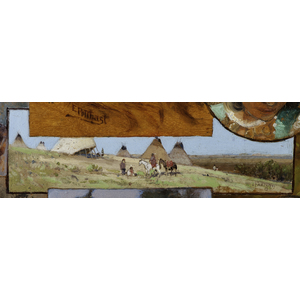 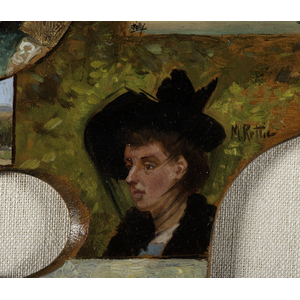 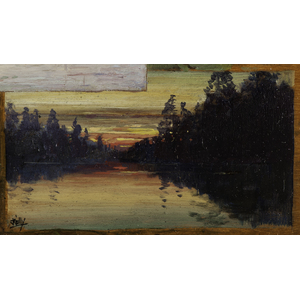 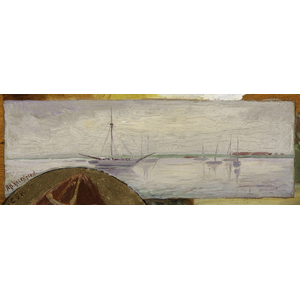 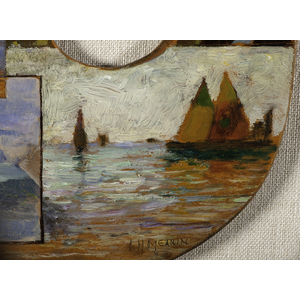 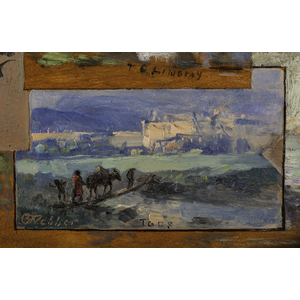 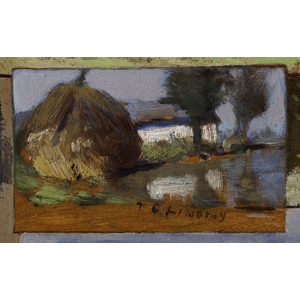 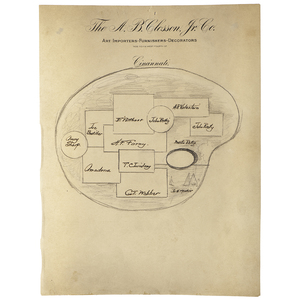 The Cincinnati Art Club was founded in 1890 by thirteen acclaimed local artists, with John Rettig serving as its first president. The club’s primary mission, as listed in its constitution, was to “promote the knowledge and appreciation of art” and to provide artists with a reputable venue to exhibit their work. In order to raise money and achieve these goals more successfully, the club would organize annual “tambolas,” a term derived from the Italian word “tombola” meaning “raffle.” During such events, panels decorated by various club members were offered as prizes. One such example, featuring the work of twenty-nine artists, is on long term loan in the Cincinnati Wing of the Cincinnati Art Museum, and is regarded as a local treasure.

This panel now constitutes a precious addition to the artistic legacy of the Art Club. As one of only two panels known to still be in existence today, this palette is of exceptional historical significance, especially since it was painted in 1894, three years earlier than its counterpart at the museum. It is the earliest tambola panel extant and possibly the first. An insight into such panels is derived from a discussion between several artists in 1964, after the discovery of the 1897 panel, and its value was already deemed contingent on "how many of these panels were painted and sold."

Creatively converting the painter’s main tool, a palette, into an artistic support, this panel offers a condensed, though detailed, overview of the growing and diverse talents that flourished in Cincinnati at the turn of the twentieth century and that would deeply influence subsequent generations of artists not only locally, but also nationally and internationally. The twelve artists who decorated this tambola panel were all "first generation" Cincinnati artists and contemporaries of Frank Duveneck, some of them founding members of the Art Club. As such, they contributed immensely to the artistic development of the region. As local lore has it, the panel would have been passed around among Art Club members, with each artist painting a small scene typical of their style.

The vignettes were executed by the following artists:

• Henry Farny was born in Ribeauville, France, but moved to America at the age of five. In 1858, he arrived in Cincinnati where he settled and became one of its most celebrated artists, known primarily for his iconic portrayal of the American West. The encampment scene here is actually a rare example of his work in oil, and Farny was no stranger to minuscule paintings. Cincinnati collectors jokingly regard Farny as the most expensive American artist per square inch.

• Arthur LeBoutillier was a miniature painter, in addition to being a surgeon.

• Thomas Corwin Lindsay, a native of Cincinnati, was known for his landscapes.

• Lewis Henry Meakin, a landscape painter as well, was a founding member of the Cincinnati Art Club and studied under Thomas S. Noble. It appears that Meakin was responsible for his marine scene, but also the creative manner in which that scene is tied into the splatter along the exterior, as well as the heavy dabs of color. He may well have been the last hand to complete the panel.

• Edward Potthast, a major American impressionist painter, was perhaps best known for his New England beach scenes, especially at Coney Island. A major exhibit of his work was recently held at the Cincinnati Art Museum.

• John Good Reilly, a noted first baseman for the Cincinnati Reds, was also a landscape artist and lithographer who worked for the Strobridge Lithographing Company in Cincinnati.

• John Rettig was a fresco artist known for his large-scale theatrical projects and his relentless taste for travel, which took him to Europe and Northern Africa.

• Martin Rettig, the latter's brother, was a still-life painter who started as a pottery decorator.

•Kataro Shirayamadani, a Japanese artist, spent his entire career with the Rookwood Pottery Company as one its most praised and prolific decorators. The artist was misidentified on a key for the panel produced by Closson's Gallery as "Amadona".

• Albert R. Valentien, a pottery decorator as well, headed the Rookwood Company's decorating department for over two decades, from 1881 to 1905.

• Charles T. Webber, who was Cincinnati’s senior resident artist during the 1890s, was also a landscape painter.

The artist's palette Tambola panel offered here is one of the most important Cincinnati works Cowan's has ever had the privilege to handle. Such collaborations among artists are virtually unheard of in 19th century American painting circles. While Cincinnati was a thriving artistic center in the late 19th century, its native artists also shared a special camaraderie- many were from a similar German heritage and developed several exhibiting groups and clubs. Innumerable anecdotes of the special friendships and shared studios between artists were published in the local papers during the period.

This panel is a wonderful illustration of the inspired and eclectic dimension of the Cincinnati Art Club, which brought together a wide array of artists from various horizons, who helped enhance the dynamism of the arts in the Queen City. Since the 1964 discovery of the panel currently on display at the Cincinnati Museum, it was not known if any other had survived until now.