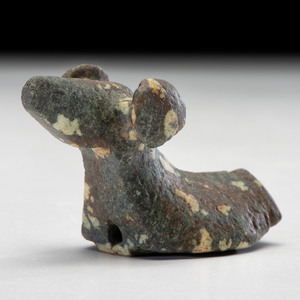 Crafted of highly contrasting cream and dark gray porphyry; head with upturned nose and large round popeyes; body has a slight flair which accentuates the salvaged tail; remnants of red ocher. 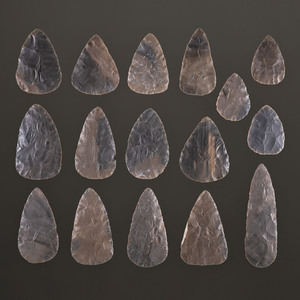 The Dickison Mounds are located north of Peoria, Illinois, overlooking Lake Peoria.  The mounds were named for J.B. Dickison, whose family farm was built on top.  This group consisted of 12 mounds, of which the southern most was destroyed to build a construction facility.  The debris from the mound was used for fill for the construction of Illinois Route 29.  These cache blades were found in the debris during the highway construction. 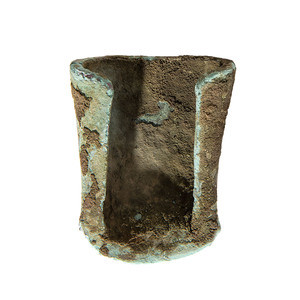 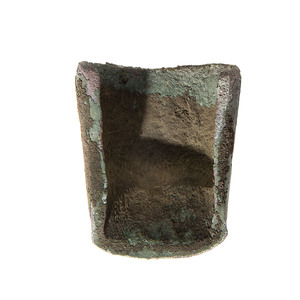 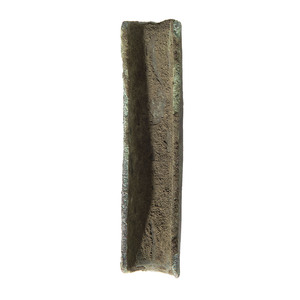 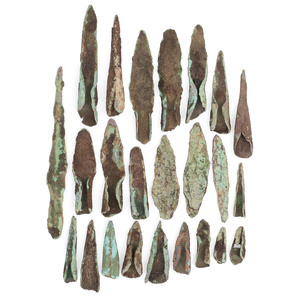 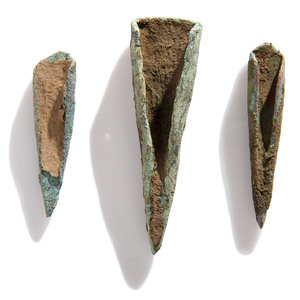 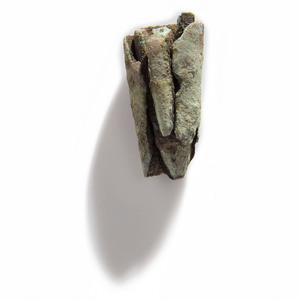 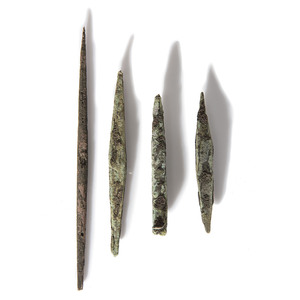 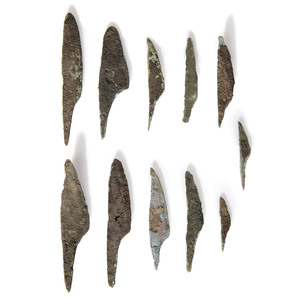 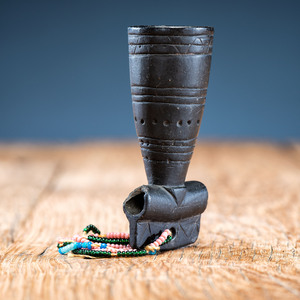 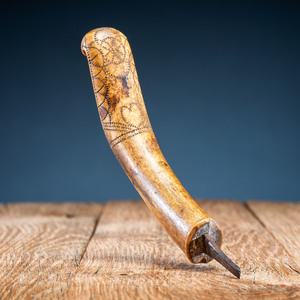 an early example, having a rich and warm patina; handle decorated with a heart surrounded by overlapping circles; iron blade
length 7.5 in.
first half 19th century 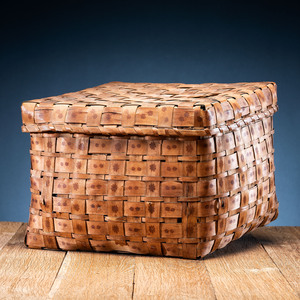 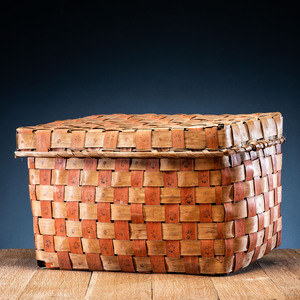 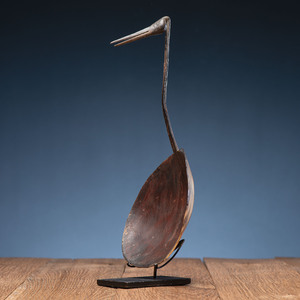 large round spoon with a slender handle; top of handle in the form of a crane, having blue glass bead eyes; remnants of red pigment in scoop
length 13.75 in. x scoop diameter 6 in.
second half 19th century

A similar example is curated within the collections of the Detroit Institute of Arts (accession number 81.410). 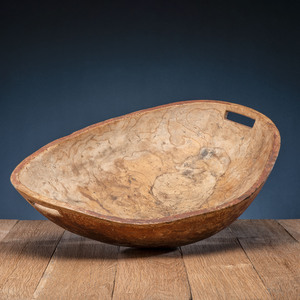 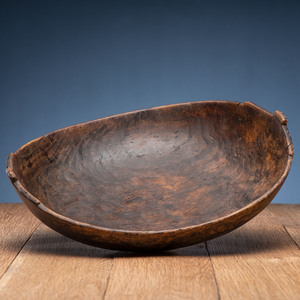 thin walled and with sides carved into the form of the Manitou; remnants of brass tacks; accession number inked on base
height 4.5 in. x length 16 in. x width 14.25 in.
19th century 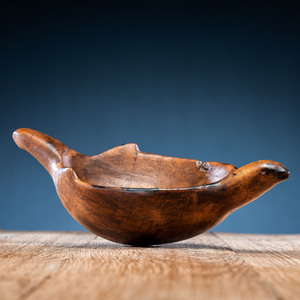 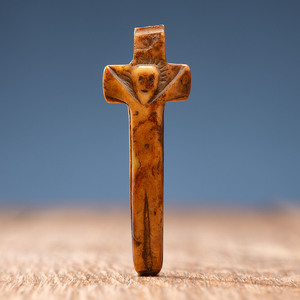 An example of a crucifix identified as Mi'kmaq or Maliseet is curated within the collections of Musee McCord (No. M3). 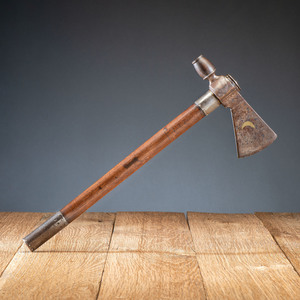 tulip-shaped bowl and beveled molding attach to a forged steel head; with one side inlaid with brass depicting a sun and crescent moon, opposite with a copper tree surmounted by the initials OC, a rain cloud, and six crosses, length 6.5 in. x width of blade 2.25 in.; collar lightly decorated with a cross placed within a sun; wood haft has a silver end cap and bands located under the head and at the base, overall length 15 in.
late 18th - early 19th century

Agreen Crabtree was born in Attleboro, Massachusetts in 1739.  At a young age, Crabtree sought adventure.  He tried his hand at many occupations including farming, fishing, and as a mariner.  In 1760 he moved to Maine and opened a lumber and shipping business.  When discord broke out between the British and French in 1775 along the northeastern coast, Crabtree saw his chance.

As described in a biography of Crabtree, A man who sailed before the mast… has left relatively few records.  A delightful Maine rascal with the improbable name of Agreen Crabtree proves to be an exception to this rule… During the early years of the war, when Maine aggressively presented threat real and imagined for the imperiled British, Captain Crabtree scored outstanding victories on the high seas (1982: 6).

Crabtree, in his small eight gun, fourteen-man outfitted schooner, the Hannah and Molly, plundered British ships and loyal British settlements up and down the Northeastern Coast, primarily in the areas around and including Nova Scotia. Crabtree’s most notable success was the Raid at Port Medway, September 26, 1776, where he captured five British vessels off the coast of Nova Scotia.

In another documented raid which occurred in 1777, Crabtree sacked and plundered a British truck house at the mouth of the St. John River in Nova Scotia.  It may have been at this point where he obtained this tomahawk.  Truck houses were established in the British Colonies to control trade and foster diplomatic relationships with Native Nations and the British government.  During this escapade, Crabtree obtained trunks of gifts for the British crown from the local Mi’kmaq and Maliseet people, as well as various other goods. The Superintendent of Indian Affairs at Machias and a patriot, John Allan, notes of a visit from Agreen Crabtree in his diary on November 17, 1777:

Allan again writes of Crabtree in a letter written the next day: A. Greene Crabtree arrived here yesterday. He has been to the mouth of St. Johns where he found a Truck House erected by the Britains under the care of Messrs, Hazen, White & Simonds, he took everything of their property only.  Also all the Indians Pledges he has Bro’t & Delivered me, expecting some payment. I cannot say how far this was Legal for a Privateer, But I am extremely glad it is-done (1987: 319).

Crabtree’s plunder at the truck house became a hot topic after the British negotiated a Peace and Friendship Treaty at Menaguashe with the Mi’kmaq and the Malecite on September 24, 1778. In a letter to John Allan after the signing of the treaty, Mi’kmaq and Malecite leaders proclaimed their loyalties to the Crown and demanded the return of the objects looted by Captain Crabtree the previous fall.

We desire you will return into the hands of Mr. White at Menaguashe the pledges belonging to us, which were plundered last Fall out of Mr. Hazen’s Store by A. Greene Crabtree, Capt. Of one of your Privateers: for if you don’t send them we will come in a manner you won’t like (Raymond 1897: 318-319)

It is unclear if Crabtree surrendered his plunder of the truck house. Captain Crabtree continued his looting through the end of the Revolutionary War, adding two other schooners to his raids. 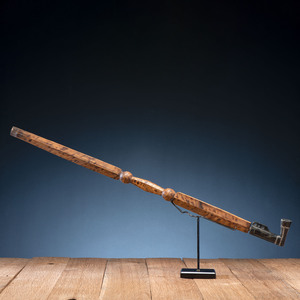 locomotive-style steatite pipe bowl; having lead inlay, incised decorations, and pierced crest, length 4 in. x height 3 in.; with a long stem having a beveled and file-branded surface, length 32.5 in., overall length 35.5 in.
mid-19th century 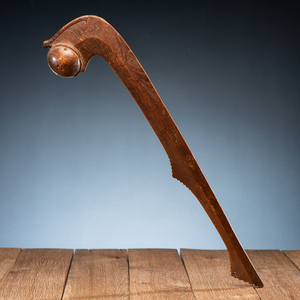 carved of ash or chestnut; burl head is topped with an otter or Underwater Panther; lower portion of haft has scalloped edges and is pierced through for attachment
length 26 in.
mid-19th century 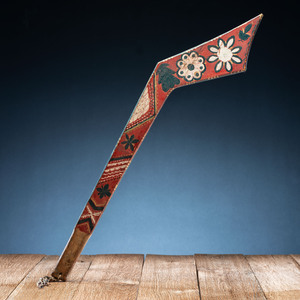 having traditional form and embellished with notched edges; painted on both sides with floral patterns using colors of red, cream, gold, and white
length 28 in.
second half 19th century 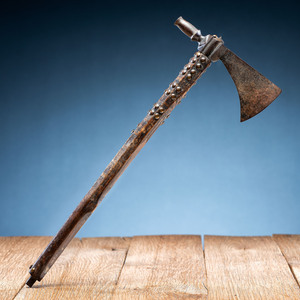 beveled haft having a file-branded surface and studded with approximately 85 brass tacks; blade with a heavy hook and tall, tulip-shaped bowl; length of head 6.75 in. x width of blade 2.75 in.
overall length 17 in.,
third quarter 19th century 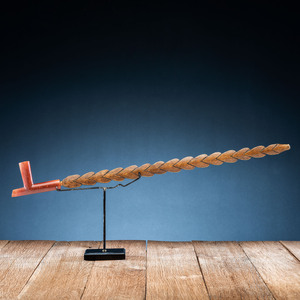 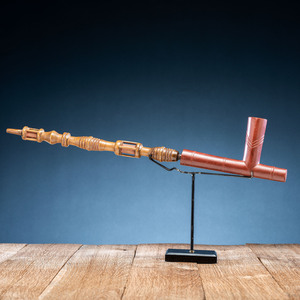 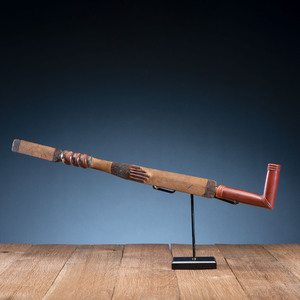 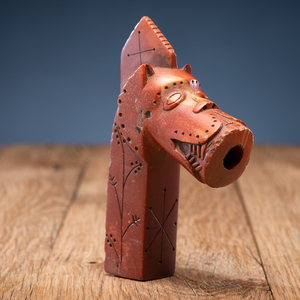 carved in the image of the Underwater Panther
length 5.75 in.
third quarter 19th century 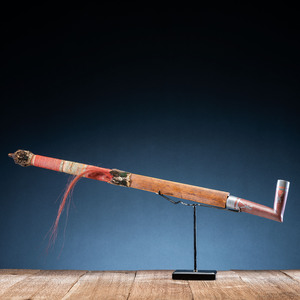 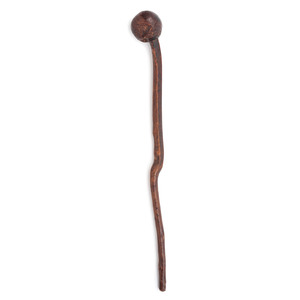